The Pitch: More than just a chip off the old block, Brandon Cronenberg (son of David) has quickly carved out a bloody, putrid niche next to his father’s works, bouncing off the elder Cronenberg’s fusion of body horror and social critique with his own, more fitful variations on similar themes. His third film, Infinity Pool, doubles down on the hedonistic, transgressive work he parlayed in 2020’s Possessor, it’s as bone-deep crazy as it is occasionally uneven. But that lopsided nature just works in the younger filmmaker’s favor, creating something as bonkers to watch as it is confounding to think about.

The fictional island of La Tolqa has become quite the resort destination for the young, rich, and filthy — including wealthy daddy’s girl Em (Cleopatra Coleman) and her boyfriend, James Foster (Alexander Skarsgård), a failed novelist whose last (and only) work was six years ago; he’s hoping the sun and accommodating customs of the La Tolqa people will serve as inspiration.

Instead, they fall in with some of the resort’s other tourists, including a mysterious woman (Mia Goth‘s scintillating, unhinged Gabi) who flatters James’ attention. But in typical I Know What You Did Last Summer fashion, James accidentally runs over a local farmer one drunken, pitch-black night, and it’s here he learns that the La Tolqa justice system is “brutal” and “filthy”; most crimes are punishable by death, traditionally administered by the victim’s eldest son.

There’s an out, though, at least if you have enough money, as Thomas Kretschmann’s menacing Detective Thresh explains: For the right price, they will manufacture a clone of you who will be executed instead. You’ve just got to sit there and watch. And that’s only the beginning of James’ descent into madness, his encounter putting him in touch with a gang of wealthy tourists who see the cloning process as a way to indulge their most violent fantasies and get off scot-free.

If nothing else, Infinity Pool is a study in extremity, a litmus test to see just how much Cronenberg can get away with. From the opening minutes, he seeks to disorient, introducing both the shiny resort and the downtrodden huts outside of it with loping, curving barrel roll shots that leave you unsure which way is up. And it just gets crazier from there, with disquieting images of red/blue goop, characters wearing traditional masks that look like disfigured visages, and the imperfections of the human body laid bare for our disgust. 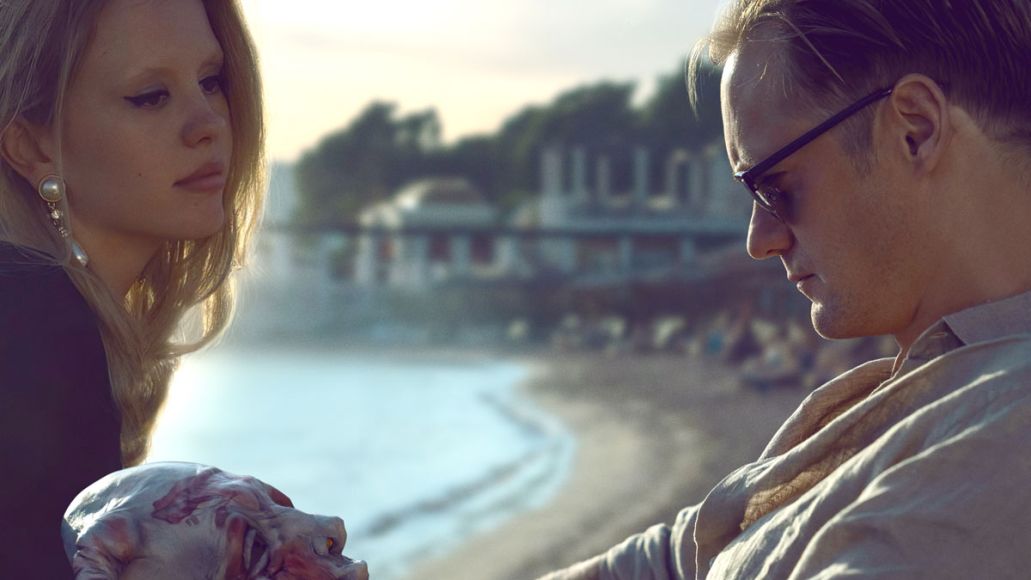