The “Another Fork in the Road” 50th anniversary tour begins in June (though the band will play select previously announced “Kansas Classics” shows in the months prior). The newly revealed dates kick off June 2nd in Pittsburgh and wrap up January 28th, 2024, in Fort Lauderdale, Florida.

A Ticketmaster pre-sale begins Wednesday (January 25th) at 10 a.m. local time, using the code SOUND, while tickets go on sale to the general public on Friday (January 27th). Alternatively, you can also pick up tickets via StubHub.

“Our entire career has been a winding journey,” said Kansas guitarist and founding member Richard Williams. “Whether it’s been the ‘original’ lineup signing with Don Kirshner, years on the bus, touring with Queen, worldwide success peaking with Leftoverture and Point of Know Return, the valleys of the ’90s and ‘dinosaur bands’ losing steam, various lineup changes, to our most recent ‘rebirth’ and success of our latest new music over the last eight years; there have been several forks in the road of that journey.”

Kansas have also released a new triple-disc compilation titled Another Fork in the Road – 50 Years of Kansas. The career-spanning collection includes a new version of “Can I Tell You,” which was originally released in 1974. This new recording features the band’s current lineup, serving as a preview of what fans can expect to hear on the upcoming tour. You can buy it here.

“I’m incredibly excited about the 50th anniversary,” added lead vocalist Ronnie Platt. “I tell people I’m not allowed to create a setlist, because it would be five hours long. There are so many songs I want to perform live. I think fans will be excited not only to hear our hits and fan favorites spanning 50 years of Kansas, but also some songs that haven’t been performed live in decades.”

Below you can see the full list of Kansas’ upcoming North American tour dates. Get tickets here, and for sold out shows, here. 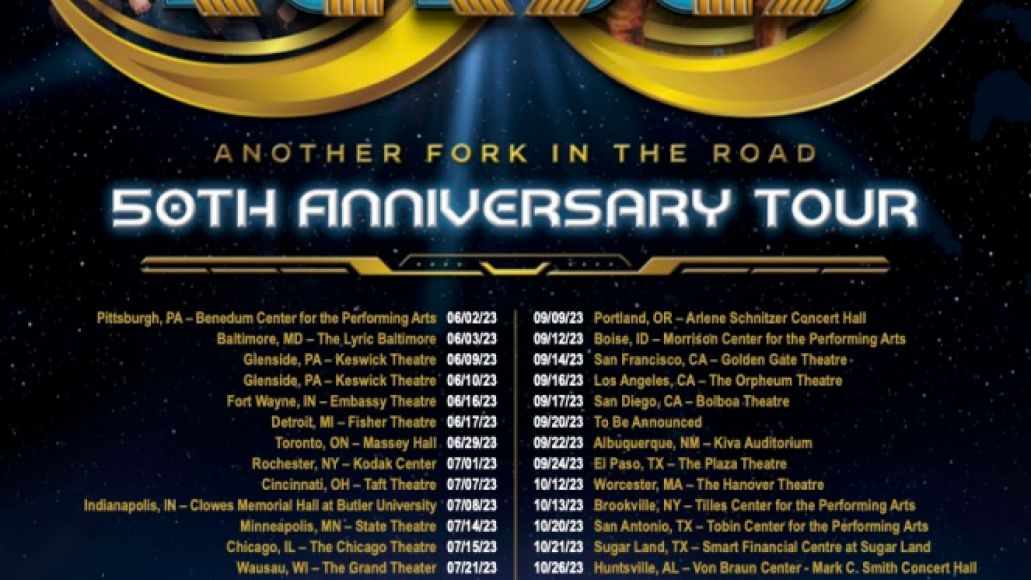