The Pitch: 17 years after the Formans shuttered their basement doors forever, a new era of revels, reefer, and joyrides is unfolding in Point Place, Wisconsin — this time on Netflix, rather than Fox. That ’90s Show follows Eric Forman (Topher Grace) and Donna Pinciotti (Laura Prepon)’s daughter, Leia Forman (Callie Haverda), as she spends the summer crashing with her grandparents, the inimitable Red and Kitty Forman (played by Kurtwood Smith and Debra Jo Rupp, respectively).

Now in the era of grunge-influenced fashion, Alanis Morrissette, warehouse raves, and disposable cameras, That ’90s Show introduces a new era of fun-seeking basement dwellers: Ashton Kutcher’s Michael Kelso and Mila Kunis’ Jackie Burkhart are mostly out of the picture, but their son Jay Kelso (Mace Coronel) appears as a central member.

Meanwhile, The Formans have some new neighbors — Riot grrrl-tinged rebel Gwen Runck (Ashley Aufderheide) and himbo-esque jock Nate Runck (Maxwell Acee Donovan) are half-siblings that live with their haphazard mother, Sherri (Andrea Anders). Rounding out the sextet is the sassy-but-hilarious Ozzie (Reyn Doi) and the fashionable and mature Nikki (Sam Morelos), and the group is constantly on the hunt for new adventures before Leia heads back to her native Chicago.

Throughout the series’ 10 episodes are major cameos from That ’70s Show‘s principal cast: Topher Grace and Laura Prepon make some memorable appearances, Kutcher and Kunis reunite briefly, Wilmer Valderrama guests as a hair guru and Sherri’s love interest, and Tommy Chong returns as the spacey stoner Leo for a couple of episodes. (Notably absent is Danny Masterson as Steven Hyde, who is currently in the midst of a criminal trial for sexual assault.)

The era may be different than That ’70s Show‘s previous offerings, but the reliable multi-camera sitcom style is back and in full swing. The 360-degree camera pans of a basement smoke sesh returns, familiar locations like the water tower and video store are featured. And, like the show’s predecessor, there are era-specific needle drops galore.

The New Gen X: One of the smarter choices in That ’90s Show is not just to focus on a new set of cast members, but to give the new group some room to grow. Each member of the core group is somewhere around 15 or 16 years old, and Leia Forman in particular is a little green when it comes to the usual small-town teenager adventures. Keeping the cast members young (and they all look like they’re 15, which doesn’t always happen on Netflix “high school” shows) cements that the series will take after the same silly tone as That ’70s Show, and will follow the group as they grow out of adolescence and into the challenges and maturity of adulthood. 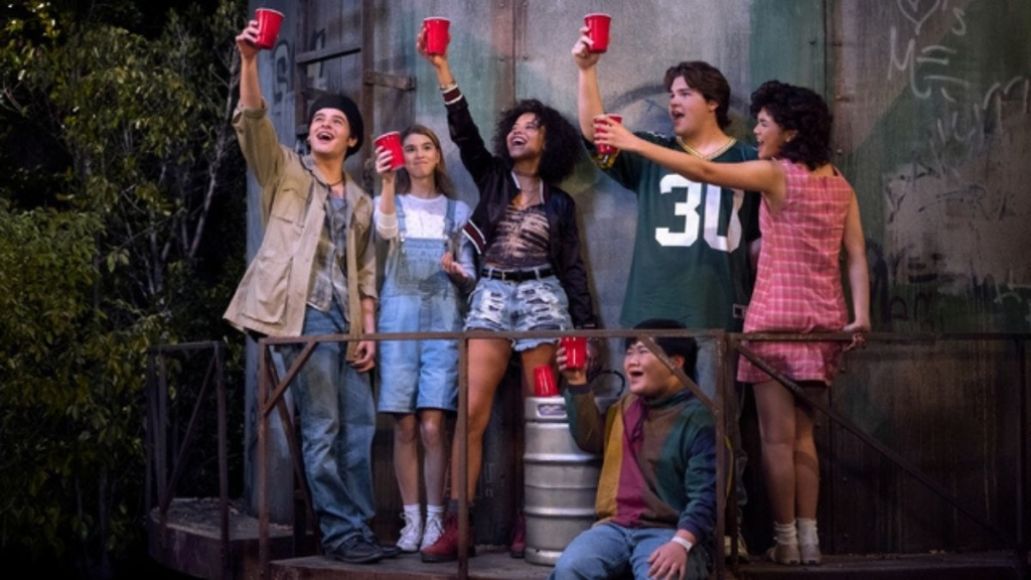 Interestingly, they’ve opted for the six members of the group to be a bit of a hybrid of the originals — while Leia certainly takes after some of the dorky tendencies of her father, Eric, Jay Kelso feels much more aligned with the witty Steven Hyde than his father. In fact, it’s Nate Runck who shares a lot more character DNA with Michael Kelso, especially considering his often clueless demeanor and his hormone-heavy relationship with Nikki.

Both Nikki and Gwen contain elements of Jackie and Donna, but Gwen’s fierce and rebellious nature in particular puts her in a different light than her predecessors. Meanwhile, Ozzie’s position as the charismatic clown is certainly in line with Fez, and his comedic chops are a major highlight in That ’90s Show.

Though the new cast is still rounding out their overall acting abilities, it’s Kurtwood Smith and Debra Jo Rupp that take That ’90s Show to the next level. Debra Jo Rupp in particular is more hilarious than ever, and between her and Reyn Doi’s magnetic portrayal of Ozzie, she consistently steals the show.

Nostalgia Hour: Of course, That ’70s Show was defined by its nods to the nostalgic offerings of the era. That ’90s Show continues by referencing several major movements of the ’90s, and that occasionally bleeds into characterization.

Gwen is perhaps the most “era-specific” character — when we first meet her, she’s shouting along to Alanis Morrissette’s “You Oughta Know” in her bedroom, which is decorated with the words “Riot Grrrl” plastered over her bed and posters of Hole and Jane’s Addiction on the walls. She references the “Riot Grrrl Manifesto,” urges Leia to prioritize her own agency instead of pleasing boys, and proudly wears her “outcast” badge.

Meanwhile, Ozzie’s character is openly gay, and even with an episode in which he comes out to Kitty Forman, he’s widely (and appropriately) accepted by everyone in the show. Essentially, the creators rightfully chose to stress that the ’90s were a way more socially progressive time than the ’70s, and it allows for a new era of storytelling within the limits of a multi-cam studio comedy — which can often feel more conservative and traditional in its essence.