Component is a section of Aux.Out. for one-off pieces, special editorials, and lost orphans of the music discussion. Today, Jody Beth Rosen offers up a unique playlist that tells the beautiful albeit sordid story of Los Angeles through 50 songs.

In 2003, California Institute of the Arts professor Thom Andersen completed Los Angeles Plays Itself, his video essay about L.A.’s portrayal on film, from Chinatown to Killer of Sheep to Night of the Comet. His thesis was that movies set and/or filmed in Los Angeles — even the obscure titles and entries of dubious merit — can tell us something about the way we view the city. I had Andersen’s documentary in mind when I made Burn Hollywood Burn, my 50-track playlist of songs about Los Angeles.

Since the Aquarium Drunkard blog did the yeoman’s work with its two-volume L.A. Burnout mix of 1960s and 1970s singer-songwriter druggie malaise, I had a big task ahead of me to choose artists that those playlists didn’t cover (and they covered a lot: Gene Clark, John Phillips, Warren Zevon, Terry Melcher, and Art Garfunkel, for starters). I wanted Burn Hollywood Burn to reflect several neighborhoods around the city, or municipalities within the county, although in the interest of time, I didn’t quite get to tackle much of East Los Angeles or any of the Gateway Cities. San Pedro’s The Minutemen do not make an appearance, but rest assured their praises are already well-sung on myriad other platforms. 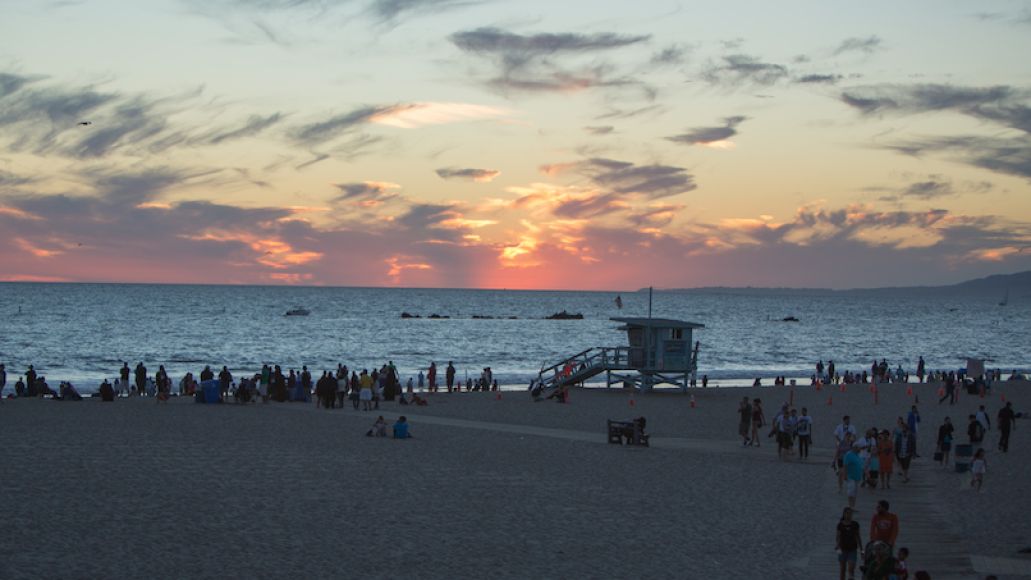 The title of the mix is meant to be ironic; I’ve lived in Hollywood, the eastern part that comprises Little Armenia and Thai Town and borders Los Feliz, and while I have mixed feelings about the district as a place, I wish no harm to it. It’s more about recognizing the weird divide between Hollywood as an industry and Hollywood as a sprawling, multifaceted collection of homes and businesses, from rent-controlled apartments and homeless encampments to glitzy hotels and the Hollywood and Highland retail monstrosity.

There is no way to generalize about Hollywood (the place) on the whole, although its reputation as sleazy and dirty is not entirely unwarranted. The artwork I chose was a photo of a graffiti-covered street sign (“Wilton Pl/Sunset Blvd” and an arrow pointing right) planted in a weed-strewn median, in front of a fenced-off apartment building. I didn’t take the picture, but this is my memory of life in Hollywood. It probably will burn, because it’s a fire hazard.

What follows here is just a taste of Burn Hollywood Burn — and it is named after the Public Enemy track, which is on the mix, but in this essay, the focus is on lesser-heard titles, things like Gaznevada’s “Ticket to Los Angeles” and Steaming Coils’ “Paul and Linda in Northridge”. 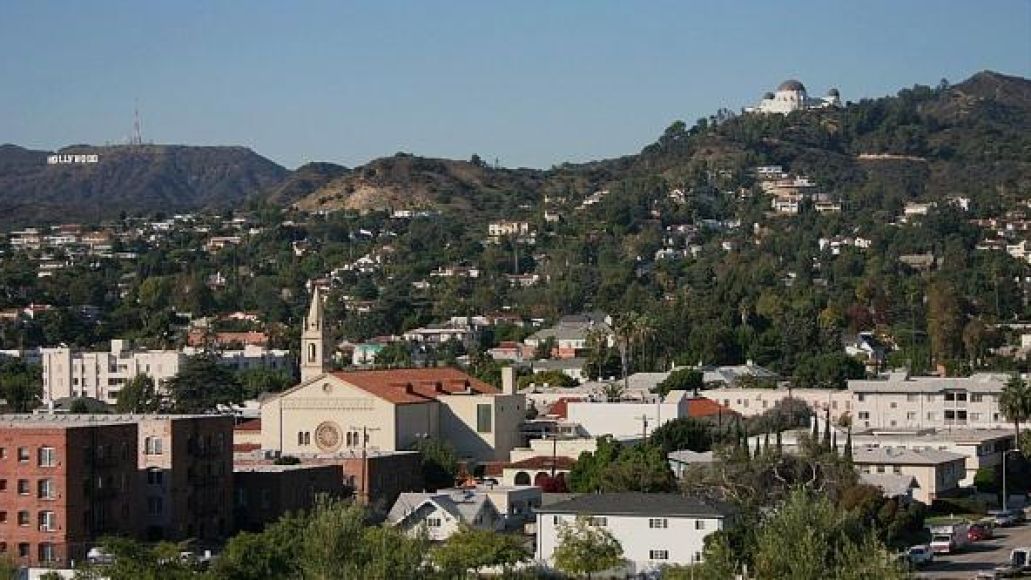 The folk-pop duo Chad and Jeremy (billed here as Chad Stuart and Jeremy Clyde) attempted a psychedelic crossover with 1967’s Of Cabbages and Kings, and when that didn’t work, they tried it again in 1968 with The Ark. According to a Guardian article revisiting The Ark, the album was so expensive to make that Columbia fired its producer, Gary Usher, who had previous success working with The Byrds and The Beach Boys. “Sidewalk Requiem, Los Angeles, June 5th and 6th”, rather than the acid rock or avant-garde experimentation a record company might be justified in fearing, is the sort of baroquely twee, mildly depressive sunshine pop that festoons many a Wes Anderson soundtrack. The lyrics don’t reference Los Angeles specifically — it’s a meditation on death — but the “cold, grey morning” where “mist fills the air” reminds us that L.A. songs can go beyond scorn or mockery or even defensive pride to distinguish the town as a real environmental space where both weather patterns and human emotion fluctuate.

Gaznevada, named after the 1935 Raymond Chandler short story “Nevada Gas”, formed in Bologna in 1977 during the city’s Movement of ’77 political uprising. By the 1980s, the punk-inflected band had evolved into a more Italo-disco style, and 1984’s pop-noir “Ticket to Los Angeles” has all the technological accoutrements of the era: drum programming, the Yamaha DX7, and the Synclavier II. Reminiscent in tone of Wang Chung’s 1985 To Live and Die in L.A. soundtrack work, “Ticket to Los Angeles” feels as heavy as the ominous, smoggy sunset on that movie’s poster looks. However, as outsiders, Gaznevada only know “Los Angeles” as a monolithic entity. The lyrics, as far as I can tell, don’t drill down and inhabit any part of the city — we have to do that through the music. We might be at a rooming house in the old Bunker Hill, before the city evicted the residents and graded the land for economic development purposes. We could be in the South Bay, bickering about politics at a port-worker’s bar in San Pedro. The ambiguity of “Ticket to Los Angeles” makes it mysterious. 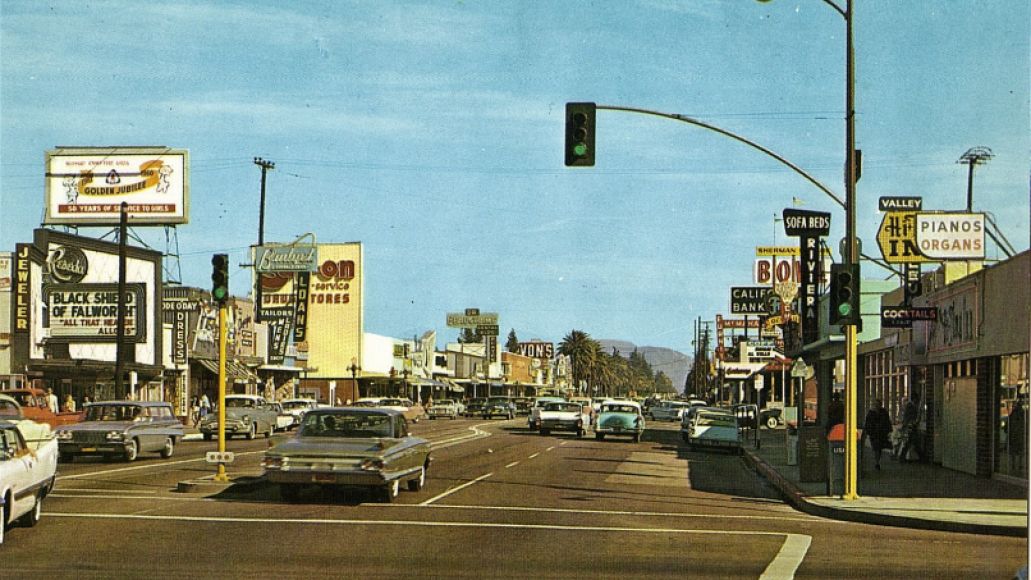 Scottish rock musician Christopher Rainbow (who also recorded under “Chris Rainbow”) was a singer for The Alan Parsons Project from 1979 through the late 1980s and had minor solo hits with “Give Me What I Cry For” and “Solid State Brain”. “Tarzana Reseda” comes from the 1975 album Home of the Brave, opening the LP and preceding the curiously named track “Funky Parrot”. Named after two adjacent neighborhoods in the western San Fernando Valley, “Tarzana Reseda” is the same strain of lilting, jazzy soft-rock that produced Todd Rundgren’s “Hello It’s Me” and America’s “Ventura Highway” three years prior to Home of the Brave‘s release.

Tarzana and Reseda are interesting bedfellows. Apart from bustling Ventura Boulevard, Tarzana is as suburban as they come. It’s the more Jewish cousin to the affluent Encino immediately to the east, and its name is a product of the movie industry (Tarzan creator Edgar Rice Burroughs owned the namesake ranch, Tarzana, that would eventually turn into the residential neighborhood). Topanga State Park is to the south, so when the song’s heroine wants to go “back to Topanga,” it’s not a very far commute.

Reseda is less middle-class and more diverse: it’s 43 percent white to Tarzana’s 70.7 percent, and about 40 percent of the residents are renters. The Karate Kid is set there; so are parts of Paul Thomas Anderson’s Boogie Nights and Magnolia. Soul Coughing’s “Screenwriter’s Blues” warns us that we “are all going to Reseda someday, to die.” It’s a coincidence that the place name sounds like “seedy,” and there are in fact much seedier parts of the San Fernando Valley as one heads northeast, but there’s a reason the neighborhood shows up in a fair amount of pop culture — the postwar dingbat apartments and low-rent Vietnamese nail salons are somehow quite cinematic.

The career high of Seattle’s The Frantics was a stint as the backing band on Bobby Darin’s 1958 hit “Dream Lover”, although in 2004, Collector’s Choice saw enough potential audience to issue a collection of The Frantics’ own singles. “Ventura Blvd” seems like an unlikely topic for a Seattle band, given that Seattle and the southernmost commercial strip in the San Fernando Valley are over a thousand miles apart, but a press release uploaded to the Pacific Northwest Bands website noted that the young band had toured up and down the West Coast. A more likely explanation is that the surf-rock instrumental was a titular tribute to Tacoma, Washington’s The Ventures, but 1950s car culture and the atomic-style signage prominent in the era makes a paean to a famous Los Angeles boulevard plausible as well.

Even if you’ve heard of Brad Laner from his projects Savage Republic and Medicine, you still might not know about his adolescent art-rock band, Steaming Coils, an early iteration of which contained members of long-running avant-garde collective The Los Angeles Free Music Society. The dubby, caustic “Paul and Linda in Northridge” is from 1985’s Secret Messages from the Schrodinger House LP, released two years after the band’s formation. The song interpolates teen plaints such as “Let’s go out tonight and eat burritos at the Mexican food restaurant,” a San Fernando Valley stoner pastime fer shure, with lyrics from “Live and Let Die”. There’s definitely a cognitive dissonance between Northridge’s reputation as a sedate north-Valley suburb (go Brent’s Deli!) and Steaming Coils’ music, perhaps better suited to an illegal Lincoln Heights warehouse space.

Incidentally, the north Valley and the south Valley feel very different. Once you get down around Studio City and Sherman Oaks, it’s almost bohemian — there’s good coffee, good shawarma, Freakbeat Records. The north Valley — and I think this was even true before the devastation of the 1994 Northridge quake — is strangely unfinished. It seems tentative, like it’s not sure it wants to keep building itself. It’s like L.A. is so exhausted by its own self-actualization from the bottom up that it finally runs out of steam near the top.