Welcome to Life Review, a new live review section on Aux.Out that looks to expand beyond the access provided by a concert ticket. Today, Caitlin White traces her 20-year relationship with Gipsy Kings leading up to their recent gig in New York City.

I’m not sure the first time I heard “Volare” was, nor do I remember the second or the third. But, I do know that most of my recollections of hearing the song involve me dancing around the living room to it. I’m not really a person who dances—in my adult years I’ve actually been known to express a hatred for it. But as a five-year-old girl in my green-carpeted small town living room, I still have vivid memories of twirling in circles to the dramatic flamenco pop of the Gipsy Kings. Even at such a young age, I knew that this music made me happy.

My dad was an avid record and book collector before he began to put the energy and money that these hobbies require into raising his four kids. Luckily for us, a large part of these collections stuck around. He’d record tapes off his dusty vinyl records so we could access the music he loved — for good reasons, we weren’t allowed to use the record player. Earlier on, the Gipsy Kings popped up. He always had an ear for music that was played with passion and grace, not necessarily what won acclaim in charts or sales or even popular opinion.

I think I’ve inherited quite a bit of this bullheaded dogma; to go against the grain of what’s popular and seek out the overlooked. I’ve been known to dismiss bands simply because of unrelenting chatter and I always form the strongest bonds to bands that fall under the radar, as if they become more deeply mine in their obscurity. I also ascribe to the school of thought that obscurity usually lends itself to a purer, more focused version of the artist’s intent. This might be a fallacy but it’s one I cling to, even as I am forced to submit to the music industry’s whims in many ways.

When I was older and I researched the Gipsy Kings’ history, I found out their self-titled breakout album in the US arrived in 1988, the same year I was born. This felt like another level of kinship with the Kings. Given that the group strings together the sons of influential flamenco artists Jose Reyes and Manitas de Plata, the fact that I discovered their music through my father was even more fitting. 2013 marked the 25th anniversary of the group’s international success, and they marked it with the release of their album Savor Flamenco and a worldwide tour. That this tour came to New York in early 2014 felt like an omen: from a dubbed cassette tape to Manhattan’s City Winery, 20 years later Gipsy Kings were coming full circle for me.

Most of you probably have heard the Gipsy Kings, although you might not know it. That’s them covering The Eagles’ “Hotel California” in the infamous scene from The Big Lebowksi, when The Dude’s arch-rival Jesus is introduced in the bowling alley. The brevity of the clip still manages to convey the electricity and excitement of their playing—it gives the song a blistering heat. The style of music the Kings make is technically referred to as “rumba catalana” and it’s a more pop-infused relative of traditional flamenco. To put it roughly, the genre has no real home because it was brought to Spain by traveling gypsies and continued to cross-pollinate with other forms of folk music in Spain and influences from both France and the Caribbean.

This is “world music” in the truest sense of the term, and this year’s Grammys even awarded the Kings one for their new album. But watching them perform to a sold out—albeit small—venue full of New Yorkers attempting to bring their best flamenco moves to the table was a clear indicator that music continually transcends ethnicity or cultural distinction. Most people at their show on Saturday night probably didn’t understand the lyrical content of most of the songs—but that didn’t mean they couldn’t understand the songs. I don’t know what any of the lyrics to any Gipsy Kings songs are, and I don’t want to find out. I never wanted to understand their music in that way. I’ve formed a purer relationship with the songs by knowing absolutely nothing about them aside from what the music itself tells me. Listening to their music, for me, feels more like sharing a look with someone than holding a conversation.

Throughout the performance, the frontman and lead singer for the group Nicolas Reyes led the cohort with a vivacity that transcended language. He continually addressed the audience without regard for whether or not they could understand his monologues. At 55, Reyes and the rest of the Kings displayed a level of skill and urgency in their craft that is rare to find in men half their age. In an interview from several years ago, Nicolas explains that in gypsy culture, children are regarded as kings, and there is a certain childlike lack of self-consciousness in their music. It is unbridled and swept away in its own momentum—a particularly memorable bass solo took up almost 10 minutes just for fun. This wasn’t a performance of sauce and youth, though, the bald, elderly bass player comically wiped sweat from his head with a towel after the effort. Most of the crowd was closer to the age of the musicians, and that of my dad, and yet I never felt out of place there. When music isn’t being reduced to a product, the idea of a typical fan demographic falls wayside. 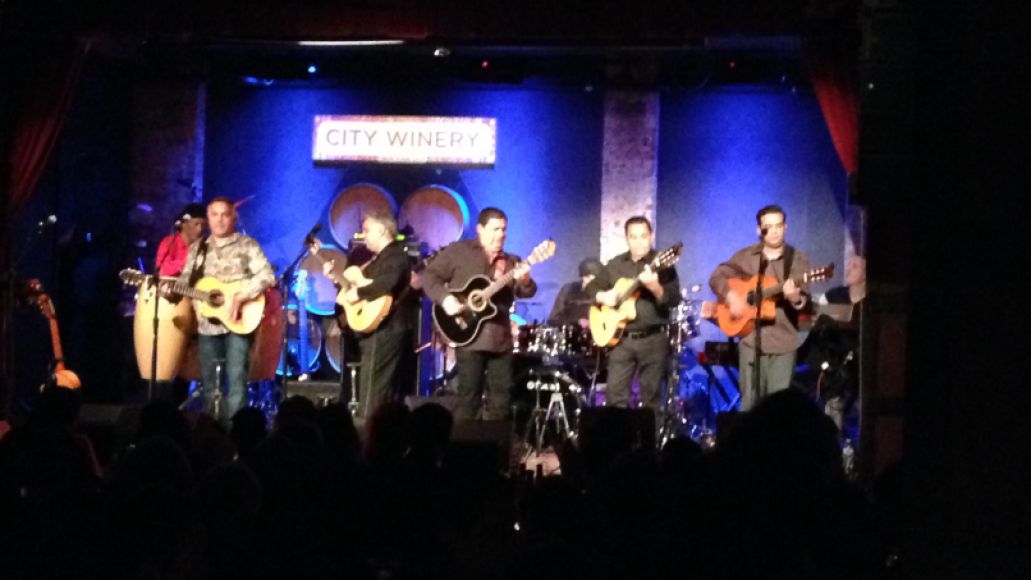 For their final encore, of course, they played “Volare”. It was such a fulfilling moment for me. It was one of those concerts where I sat on the edge of my seat, loving all the tracks but aching desperately to hear that one song. Just that one. I genuinely had no idea if they’d play it or not. But it’s certainly one of their best known original songs, and the high intensity chorus makes it a great final number. Something I always loved about “Volare” as a girl is that it starts off sounding sad and lonely—it’s just Nicolas’ voice stretched out slowly over a single guitar line. Then, the rest of the band burst in with drums, harmonies, guitars, and piano. From sounding like a song that will be bereft or gloomy, it builds into this tremendously joyful celebratory melody.

Doing this job, being a music writer, it can steal the carefree, exultant parts of music from you. You start to see things in terms of what you can cover for who, what acts are gaining traction with audiences, and how to eek out a living writing about this shifting, transient form of human spirit we call “music.” When music becomes something that you’re explaining or attempting to describe, when it becomes your source of income and a topic you are required to be an authority on at all times, it loses something along the way. Or maybe you yourself lose something along the way.

Listening to “Volare” live for the first time made me want to dance with abandon again, and music hasn’t done that for me in a long, long time.

Dancing to the Gipsy Kings