Component is a section of Aux.Out. for one-off pieces, special editorials, and lost orphans of the music discussion. Today, Kevin McMahon takes us inside Foundations of Music, Chicago’s nonprofit for music in public schools.

March is Music in Our Schools Month at Foundations of Music. You should help out if you can, and here’s why.

Music is one of the most consistent forces in human culture. As Daniel J. Levitin, author of This Is Your Brain on Music: The Science of a Human Obsession, points out: “Whenever humans come together for any reason, music is there: weddings, funerals, graduation from college, men marching off to war, stadium sporting events, a night on the town, prayer, a romantic dinner, mothers rocking their infants to sleep, and college students studying with music as a background.”

Making music should be accessible to all, but sadly, that is far from reality. Helen Hess, the Special Projects Coordinator of the nonprofit community organization Foundations of Music, tells me about her first experience in the classroom: “Most of the [students] had never seen [music] live,” she says. “They might have seen a picture of a violin, but hearing it … they were amazed. The teacher later told me that all their faces were in complete awe while I was playing. It was so great to be able to show them something they had never seen.”

Foundations of Music is by no means new. Its lineage traces back to the late ’80s when it was called Christmas is for Kids. Its roots are simple enough: Musicians wanted to give gifts to children living in homeless shelters throughout Chicago. But, as many active in philanthropy will tell you, service can be addicting. Removing the distance between yourself and the marginalized corners of society is a bit like swallowing the red pill; there’s no going back. And so these musicians wanted to do more, giving lessons, adding partners, and eventually creating a sustainable infrastructure. Finally, in 2009, they worked with the nonprofit consulting company Taproot to set out in a steady direction. 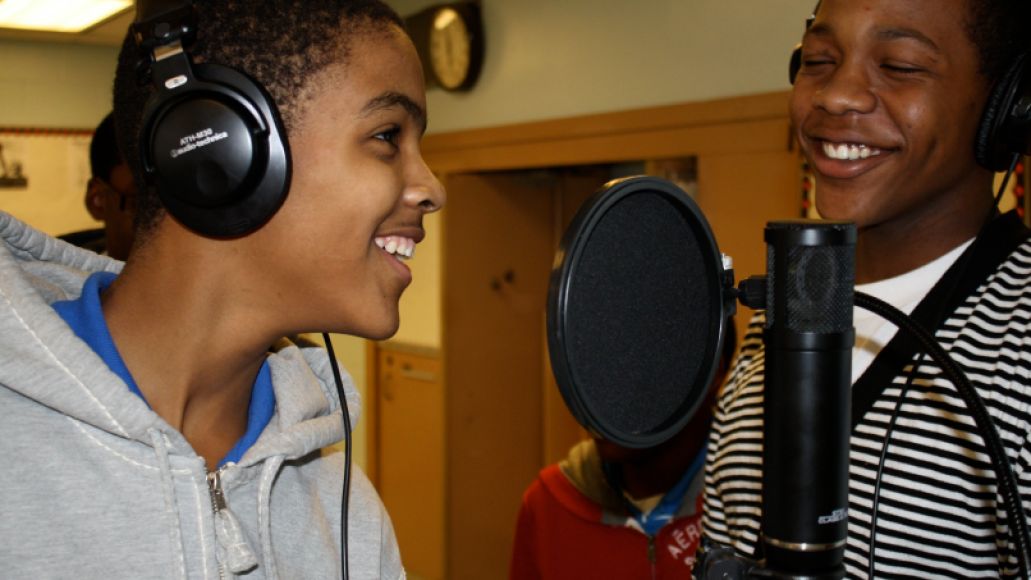 Today, the nonprofit provides music education to 5,000 students in over 25 public schools in underserved areas all across Chicago. FOM teaches a wide range of classes; it specializes in general education and choir, but also offers songwriting, production, and an array of workshops and scholarships. Foundations of Music serves K-8th grade, then works to help interested students transition into secondary education music programs.

I also work in the nonprofit world. I co-operate a company named We Are Lions that promotes artwork made by individuals with disabilities. The experience has given me a mechanic’s insight into the machine you see — the grant writing, the bureaucracy, the trying-to-stretch-every-dollar-further-than-it-can-go. You never know quite what to expect. Contemplating those day-to-day stresses, I approached the Foundations of Music headquarters. 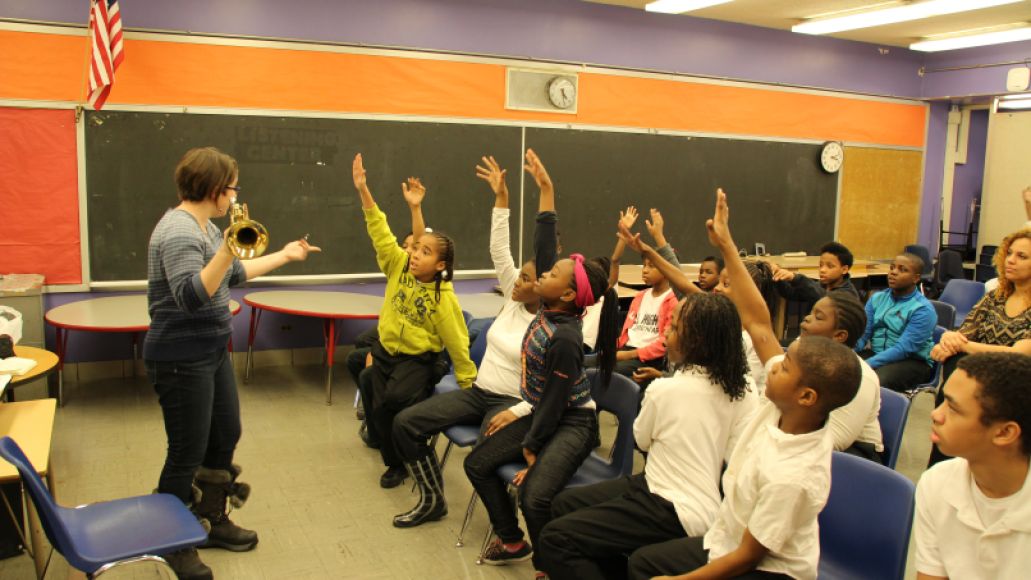 HQ is a cluttered office within a large red brick building on the south end of Old Town in Chicago. The building is owned by Jam Productions, a legacy that dates back to the days Foundations of Music was the nonprofit arm of Jam. The door opens and three smiling faces greet me.

They are Robin Koelsch, Greg Hughes, and Helen Hess, three of FOM’s full-timers. We exchange pleasantries and begin. In my business, I’m often made aware of the blight that plagues the nonprofit industry — soaring administrative costs and misappropriated funds that lead to diminishing returns on donation. Before I give a ringing endorsement, I want to do my homework. It’s clear from the beginning that Foundations of Music is a lean organization comprised of a small core team and supportive board helping manage a slowly expanding number of “teaching artists.” These teachers operate in schools with student bodies that are 97 percent low-income. It’s the kind of clearly traceable impact line you look for when evaluating a nonprofit.

Equally impressive is how entrenched the ideals of music are in the organization. “Practice what you preach” seems to be taken very literally at FOM. Koelsch, FOM’s Program Director, moonlights in a 10-piece funk band. Development Associate Hughes is in the throes of conducting an orchestral performance. Hess is an actively performing concert violinist. All this adds to the feeling that the passion and belief in music’s benefits is far from just rhetoric at Foundations of Music. Koelsch hands me a thick dossier packed with testimonials from students and teachers alike. 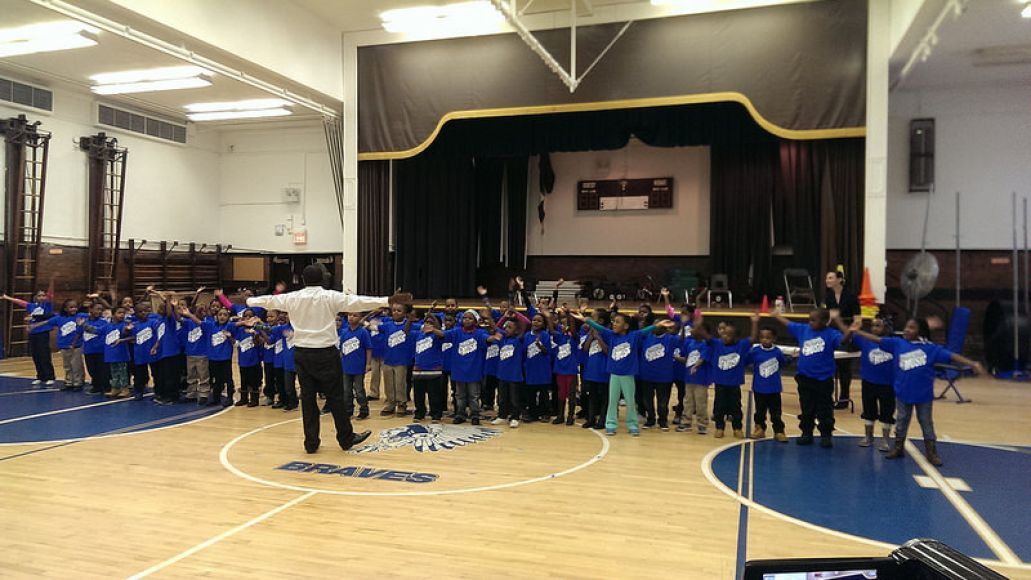 The students unanimously praised FOM’s place in opening them up to the world of music and the benefits they found inside. A fifth grade teacher from Sawyer Elementary was struck when a student told her that the FOM class was “the first time I felt like I belonged and meant something.”

I then asked for some numbers. I’ve read plenty of studies touting the benefits of music instruction on kids, but I went into the meeting with the impression that there would be one crystallizing stat to drive the point home. The point: These guys are necessary.

Robin’s response makes me blush. “I’m going to say this,” she begins. “Yes, there are direct correlations showing our students achieve higher standardized test scores. That’s a great byproduct of what we’re doing. It’s important to note that that is the truth. My stance is that music education is important, because music is important. It provides avenues of self-expression, and how to positively affect people, and the kind of social emotional learning that has a lasting effect.” 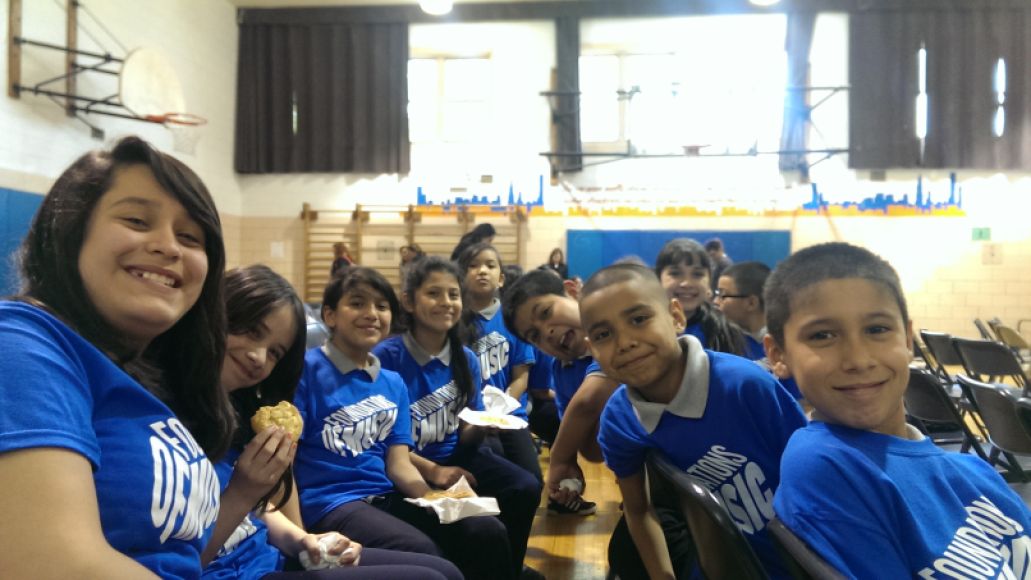 She’s right. Any amount of research into the topic will flood you with studies showing music instruction is a no-brainer. I offer up my own story of how music changed my life, and how empty I would be without it. Soon everyone takes his or her turn, and for a brief minute it feels like group therapy. After a lot of head nodding, we reel the tangent back in and settle on a statement: “It’s all about the kids.” It’s a bit of a platitude, sure, but no less true or important.

March is Music in Our Schools Month at Foundations of Music. Their goal is to raise $20,000 to support and expand ongoing programs. For just $30 you can put a child through one month of music education. It’s a gift that makes sense for the avid music fan (and it’s tax deductible). I strongly urge you to check out the cool stuff they do here.

To find out more about Foundations of Music, check out their website.