Component is a section of  Aux.Out. for one-off pieces, special editorials, and lost orphans of the music discussion. Today, Jerard Fagerberg recalls the skate videos that introduced him to, and guided him away from, punk.

“Far below a furry moon, our purposes crossed the weird divide between our kinds”
– The Shins, “The Weird Divide”

I had no idea how to define myself until I bought my first skateboard, a Black Label Mike Vallely deck with Tensor trucks and gum-white Spitfires. Vallely was punk as fuck. He was skating’s Henry Rollins – the demagogue of a lifestyle I used as a dumpster for all my pre-teen suburban discontent.

Steeped in the ideologies of rebellion and abandon, punk and skateboarding were alloyed in the same gutter in the 1970s. Both were graffiti on the face of authority. The West Coast hip-hop contingent notwithstanding, by 2001, when I was 12 and patching my identity together with safety pins and grip tape, punk and skateboarding were so deeply embroiled that every shithead on urethane wheels in my New England hometown saw them as synonyms. The two were pushed together on an atomic level and magnetically pressed to plastic film, and skate videos became something of mixtapes for young riders. 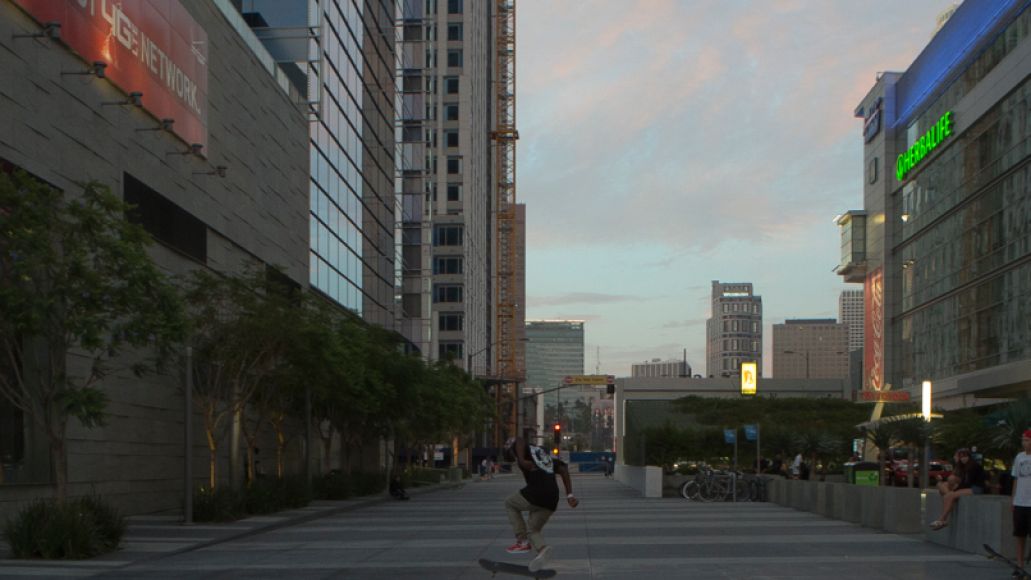 Despite their popularity, skate videos are not necessarily a Panopticon of culture. Skaters tend to reach back to the late ’80s or early ’90s for their edits, so these vids make for good nostalgia watches but are rarely a source for trend-hoppers to find a fix. For me, they were a window into the subterranean punkboarding scene I was too young to fully participate in. It was how I learned the norms worth imitating.

Listening to punk rock helped kill the pain of schralping my ass on curbsides. Its reckless power chords and bottle-smashing drum lines were the antidote for road rash. I was always a shitty skater, too awkward for the board. But punk gave pros the gall to hit 20-stair kinked rails with the wherewithal of a Bowery mosh pit, so it gave me the audacity to think I could pull it off too.

In reality, I was just a middle school dickhead with torn jeans and designs on obscuring how tepid and emotional I actually was. I liked punk in a voyeuristic sense. It was macabre and intriguing, though I only ever half-committed to the studded-leather-and-ripped-jeans steez my friends espoused. I was an actualized version of the protagonist from AFI’s “I Wanna Get a Mohawk (But Mom Won’t Let Me Get One)”. Still, for the first time, I found myself falling wholly in love with the concept of music – even if the palette wasn’t a perfect match.

Black Flag, The Stooges, The Adverts, Anti-Flag, The Clash, Minor Threat – all came to me in the glow of a skate video. Eric Koston’s part in Chomp on This thrust me into GG Allin’s bucolic catalog with “Bite It, You Scum”. Mike Maldonado’s edit in Toy Machine’s Welcome to Hell welcomed in the ghoul-rock sideshow that was the Misfits. Flip’s Sorry!, hosted by Johnny Rotten, a standard-issue idol for amateur delinquents, exposed me to Gray Matter’s throaty “Burn No Bridges”, an anarchic sub-radar screamer that I burned onto every CD-R I popped out of my desktop tower that year. 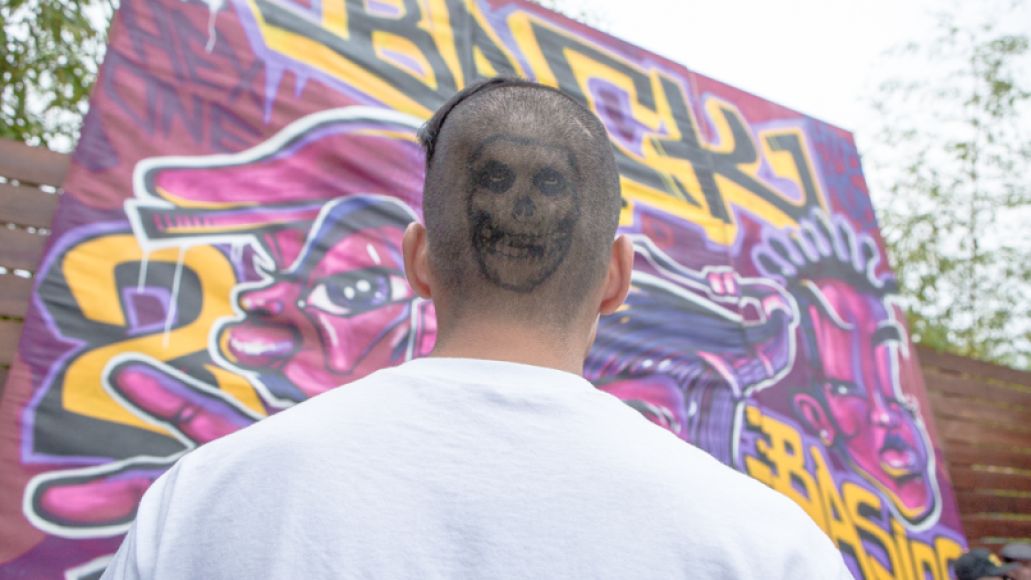 The breaking point came with the Piss Drunx – Jim Greco’s fuckfaced cadre of degenerate boarders who, in 2000, helmed a bleary upheaval of skateboarding, bringing it to hardcore extremes. Rolling Stone called them the second coming of the Sex Pistols, and this comparison was no coincidence. Greco and his crew at Baker Skateboards were purposely styled after the British punk dystopians, and it showed in their chaotic films. Baker Bootleg and Baker 2G became canonical to my friends, and their ride sessions eventually degraded into contests of pain thresholds and sneer-lipped peacocking – all in the name of punk rock rebellion.

I had no concept of what it felt like to be drunk as piss. I imagined it was like living life through a fisheye lens, but as with skateboarding and punk rock, I was going on borrowed experience. Still, I resolutely Sharpied a crooked PD logo onto my algebra binder and played the part of an adolescent scumbag as best I could. And nothing helped me live out that blood-polished unreality like the music I heard in skate videos.

But 2001 was when things started to get weird. By the end of the year, the adrenaline-soaked association between punk and skateboarding would rollick to a fissure.

It was the year I traded Sid and Nancy for Donnie Darko. The year I moved into the casual section of the Vans catalog. In 2001, I noticed that the VHS tapes my friends brought over began to take on a more avant garde aesthetic, incorporating quick cuts and lighting effects that would’ve been at home in French film noir. The edits became less about frustrating city cops and more about framing lens flares under big air. High art at low angles.

One of these such tapes was Transworld’s Sight Unseen, which opened in a whirl of celluloid landscapes, kitschy bails, and ambient future jazz. It felt different, closer to my naturally timid heart, and it included one of the oddest team montages I’d ever seen, set to The Shins’ “Caring Is Creepy”.

This was three years before Garden State made “New Slang” the de facto anthem of the anxious and undefined, before being weird felt like it was stylish. When it first crawled through my speakers, “Caring Is Creepy” made all the skating disintegrate into the background. The warbled whistle of its intro sank into my temporal lobe, flushing my entire nervous system with sweet, sweet serotonin. It was better than adrenaline.

There was no precedent. Sure, Neutral Milk Hotel and The Flaming Lips had been making weird music for over a decade at that point, and, if you really wanted to take a microscope to it, Radiohead were on their fifth LP by 2001, but, for a kid who spent his formative years skanking to NOFX, the song was a revelation.

Soon after, I bought Oh, Inverted World and listened to it until the underside of the disc was matte, until James Mercer sounded like he’d come from the wilds of New Mexico to stutter me a throat-weary version of “Girl on the Wing”. Later that year, I watched Foundation’s art house statement film Arts Bars Subtitles and Seagulls, in which Jon West took flight to Modest Mouse’s “A Different City”. Then it all happened over again.

Isaac Brock’s kilter-switching sideshow of a voice bombarded me with all the curiosity of a truck stop amusement park. A jambalaya of punctate riffs that boiled with coughing laughter. I bought The Moon & Antarctica and played it until my mom outright banned it from her van. The band’s flanged-out guitar – which seemed more lazily strummed and twisted than any Dead Kennedys song I’d ever heard – reverberated through my ears like a slab of loose coping.

What the fuck was I listening to?

When I rewatched Sorry!, I keyed in on Mark Appleyard’s spot. He skated to Placebo’s “Every Me, Every You”, which emerged as a sentimental, androgynous bit of slacker love. Soon, it replaced “Burn No Bridges” as my mixtape go-to. Likewise, Built to Spill’s “The Plan” swamped my ears unexpectedly the second time I watched Modus Operandi. Nothing was the same. While my friends geeked out over salad grinds and gnared cheekbones, I was somewhere else.

I had never heard so much space in music before. It was comfortable. The lyrics were obtuse, and, because of that, they felt profound. Resonant. It all seemed so careful. Punk was all about abandon. Cramming 200 BPM into a measure. Hocking loogies at venue security. These were shiftless ideals. Machinations of a culture that was ill-fitted for a kid who could barely muster a clean manual. 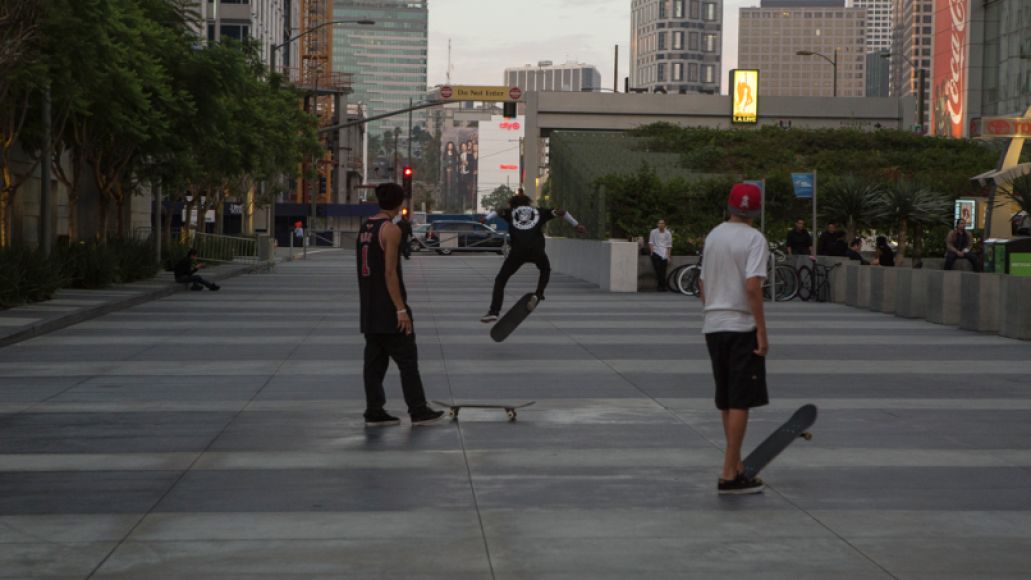 Not long after the Weirdo Awakening, I went off to a private high school 35 miles north of my hometown. There, I wore khakis and collared shirts, no safety pins, no Sid Vicious lock-and-chain necklaces, and bore deeper into the rabbit hole. I let my skateboard grow dust in favor of my Walkman. I lost connection with all my riff raff friends, all of whom continued to skateboard years after I’d given up thrift store acid wash and bearing grease.

In retrospect, punk rock and skateboarding always made me feel nervous. Crammed. Girdled into a phenomenon that I thought I could shoehorn into with a Black Label board and a pair of pillowy shoes. Jim Greco and Henry Rollins were totems of the impossible. I thought I wanted chaos, but the truth is I wouldn’t have known what to do with it if I got it. And even though skateboarding videos were supposed to be a vessel for adrenaline, they also showed me that it was the wrong elixir.

I was meant for serotonin.

Many thanks to skatevideosite.com, which is an infinitely useful resource for tracking down the best skateboarding video parts and their soundtracks.

Gapping the Weird Divide: How Skate Videos Introduced Us to Strange Music