SoKo is crying. Her head is bowed, and her face is hidden behind a cerulean bob. The Bordeaux-born singer has just plodded onto the stage, and something is wrong. “This is going to be pretty hard,” she says, wiping her face and tucking her hair.

The crowd hushes. The energy dips. What’s the appropriate reaction to the star of the show when she’s not herself?

A few people whistle halfheartedly. There are stray cheers of encouragement. Two of her band members gather next to her as she begins the show. 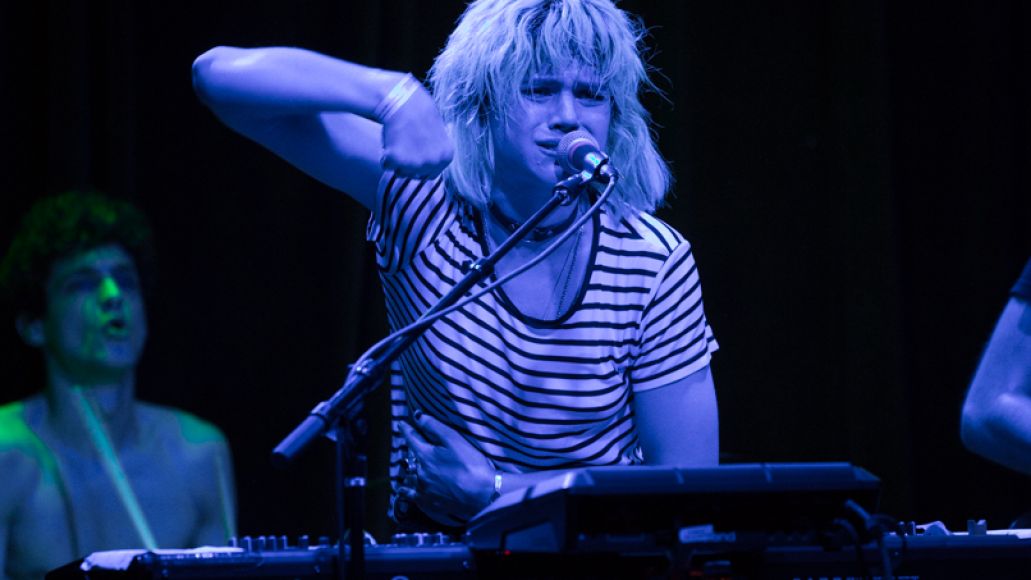 Only a few hours earlier, SoKo appeared spunky, though a bit tired, as we sat in her green room at Rickshaw Stop in San Francisco.

She likes my shirt, she says, and she props my recording mic right up next to her face. She wants to be sure I can hear her okay later on. She’s very easy to like, due in large part to her candid honesty, and right now, she has something weighing on her mind.

“In two weeks I have to start shooting a film, and I’m freaking out,” she says. “There’s not a single atom or molecule in me that is like, ‘I’m craving to do a movie now, I haven’t done one in three years, now that’s all I want to do.’” She looks down at her striped shirt. “I’m seriously like, ‘This is a huge sacrifice.’”

Completely separate from her musical endeavors, SoKo has a respectable film career in France. She has appeared in quite a few movies, including several that sent her to Cannes. In 2010, the Académie des Arts et Techniques du Cinéma nominated SoKo for a César Award for Most Promising Actress, an honor she shares with talents like Marion Cotillard and Léa Seydoux. In 2012, she played the title character in Augustine, receiving rave reviews from the likes of The New York Times. They likened her performance to being “as grave and luminous as a silent-film star.”

But that SoKo isn’t sitting in front of me. This person is a musician, and she’s not ready to be an actress again. “That’s like sacrificing my well-being and everything I’ve built to be comfortable and fulfilled as an artist, being so prolific and such a workaholic, sleeping four hours a night because I’m so consumed with being creative. Suddenly, I have to extend myself to someone else’s project?”

“Do you feel like you have to forget who you are when you make a movie?” I ask.

It’s a recurring theme in SoKo’s career. Films allow her to live comfortably but force her to fracture her identity. She lets go of her ambitions, personality, and consciousness, all to essentially bend to someone else’s will. Worst of all, she can’t make music.

But it’s not that she doesn’t want to. “I want to be versatile. I love to do everything and to jump from one thing to another with ease,” she says, “because the more versatile you are and the stronger you are, the more you can adapt to your surroundings.”

Then again, being an artist isn’t really about being strong — at least not always. Sometimes, especially in SoKo’s case, it’s about feeling everything and processing life’s events with a spectrum of emotions in a productive way. Sometimes it’s about the ability to draw from suffering.

SoKo had a European hit single in 2007 with “I’ll Kill Her”, but the song isn’t one she likes to talk about. Several years after her first EP, she reemerged with I Thought I Was an Alien. The 2012 debut album was a departure from her twee Top 40 aesthetic in favor of an angsty, folksy take on dream pop. But where Alien was a reflection of the singer’s anxieties, it wasn’t quite as therapeutic to make. SoKo was still wrestling to avoid bouts of depression, and so with the following record, she decided to embrace a happier, less frantic sound. This year’s My Dreams Dictate My Reality, her second full-length, is the result, offering a much more cohesive, jaunty new wave sound. It also had a personal, remedial effect for SoKo.

“I want this record to be transformative,” she says. “I want everything in my music to make me feel good.”

My Dreams maintains some of the lo-fi overtones that her first album introduced — the drum machine reappears — but SoKo was able to look inward more thoroughly than before. She found a bass she loved (“It filled me with so much happiness to play it”), teamed with famed metal and post-hardcore producer Ross Robinson, and set to work on music that framed themes about her rough past in an optimistic way.

“I lost my dad, and I have a fear of abandonment and a fear of commitment,” she says. “[It’s like] being very aware of your situation but at the same time not being able to escape it. I was like, ‘Fuck being depressed!’”

Despite its happier, more easygoing appeal, the album is more thoughtful than her previous work. SoKo was far more focused on making My Dreams feel like a fully formed thought. As she says, she was thinking about “learning from your mistakes, and having a better idea of what makes you you and what you’re leaning towards.” But though the album was written before she began recording, the most important lyric came during an improvisation in “Visions”, the second-to-last song on the album. It was the line that made everything come full circle: “Forgive the ones you hate the most.”

“It summed up everything I was trying to do with the record: forgiving myself, forgiving all the guilt I’ve been carrying, feeling responsible for people dying around me, pitting myself as a victim all the time.” She pauses. “I was holding a lot of anger at my dad for abandoning me, [but] then thought, ‘It’s fine, he didn’t abandon me, he just died.’ I was hating on my past lovers for abandoning me and then thinking, ‘Well, I actually pushed them away.’

“I was also realizing that the person I hate the most is myself, and that I need to be easier with myself.”

Whether or not it’s self-imposed, SoKo is no stranger to volatility. The musician endured a tumultuous relationship with Ariel Pink, saying, “I knew his music and I hated his character, like with a passion hated him, but we had a lot of friends in common.” Eventually they began dating, but it ended disastrously when Pink cheated on her. Since then, though, they’ve mended their friendship and frequently collaborate on each other’s tracks. She wrote “I Just Want to Make It New with You” for him, and Pink has written several songs about her. Most recently, on SoKo’s My Dreams album, Pink sings on two songs, “Monster Love” and the hook-riddled “Lovetrap”.

“It’s a weird, wild roller coaster ride. I love him so much, and I love his music so much, and I think he’s a genius,” she says. “He’s like a mad crazy genius. It’s good we can actually make art together.”

It doesn’t really seem to bother SoKo to talk about her history with Pink. She is, above all else, a very honest person, and she doesn’t mind her personal life being visible to the public eye. As an openly bisexual woman, she’s frequently bombarded about her position on sexual orientation; however, truth be told, it’s a label she’s not fond of bearing. “It’s so bad that the word ‘bisexual’ carries such a strong, heavy ‘if’ kind of thing. I always want to take the word back, like I’m not bisexual, I just like people,” she says. “I’m not anything.

“I feel like the young generation is a lot more okay with crossing boundaries and confusing everyone, so everything is a bit weirder; everything is less straight,” she muses. “Even with sexuality.”

SoKo is frequently taken for a lesbian, particularly due to the fact that songs like “Who Wears the Pants ??” thematically circle around a homosexual relationship dynamic, but she’s come to not really take it one way or another. It’s a non-issue. Instead, she chooses to focus her passions on whatever project draws her interest.

And there are frequently many musical projects vying for SoKo’s attention. Even besides all of the writing and composing she does for her albums, she shoots, edits, and produces her own music videos. SoKo may be sweet and charming in an interpersonal context, but when it comes to this sort of work, she’s fierce. Often, critics and naysayers don’t believe that she handles her music’s video productions. “I bring the whole team together, choose the locations, and write my treatment,” she says firmly. “I make everything happen, choose the cameras, fucking sit down in every editing room. I make everything myself, and I love it.”

That’s obvious. Leaving the green room, I’m positive I’ve never seen someone so sincerely in love with her work. I’ve never spoken to someone so forthright with a total stranger, either. She seems spastic, but in a way that the most creative people often are. She seems happy, too, although I’m not sure why that’s so important to me. I suppose I’m understanding her dynamic appeal. 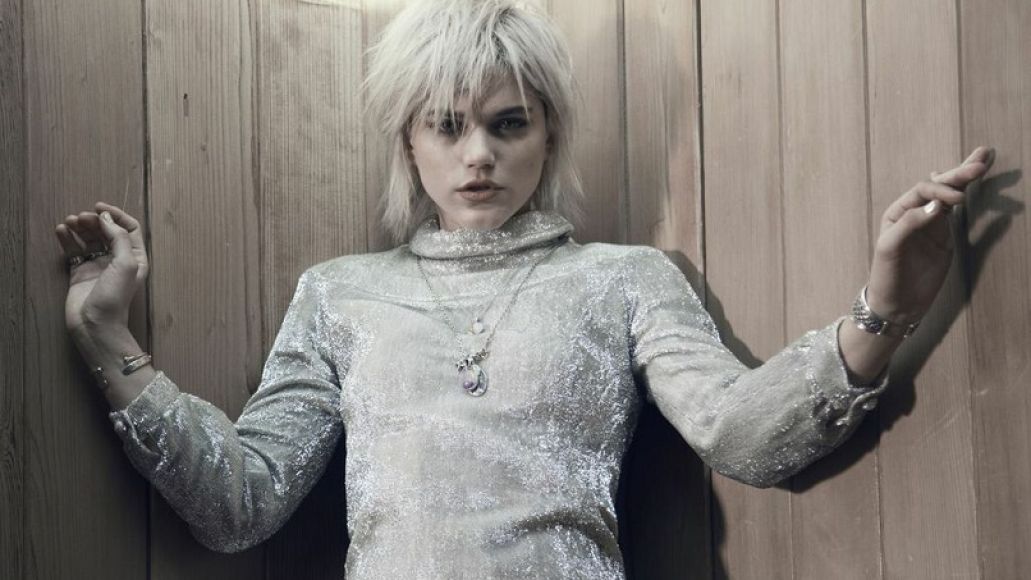 Several hours later, that excitement has warped into distress, although after a few songs, she’s beginning to come around. She’s smiling a bit, and she’s more talkative. The SoKo I met, the manic pixie, boldly unabashed, is beginning to peer out onstage at Rickshaw Stop. The audience is amusing her, and she’s beginning to sway along with her music.

Someone in the crowd shouts out a request for an old song, her first hit, “I’ll Kill Her”.

Lonely Bones, Lovely Heart: SoKo on Forgiveness and Staying True to Self