Standing on the guardrail that divides the stage from the crowd, Stuart Murdoch looks over the crowd at a sold-out show in Berkeley, California, and exclaims, “Well this is it, isn’t it? We haven’t had this much fun in years!” Watching from a few feet away, it’s hard to argue against him.

“Fuck Coachella,” he adds, though the crowd needs no reminder that the show they are watching — the one that has featured Murdoch getting mascara applied by a fan mid-song, bleachers of devotees on all sides of the band dancing in unison, brandishing bubbles, and waving glowsticks — is a show that Belle and Sebastian want to be playing.

While Girls in Peacetime Want to Dance, the band’s ninth studio album, isn’t their first record to feature booming bass or infectious synth, Murdoch confirms that the album was recorded with dancing in mind. “There’s nothing greater to aspire to than filling a dance floor with people who are just losing it,” he affirms, speaking by phone as he navigates his way through Central Park. “We’re all DJs in the band, and we know how to get people moving.” 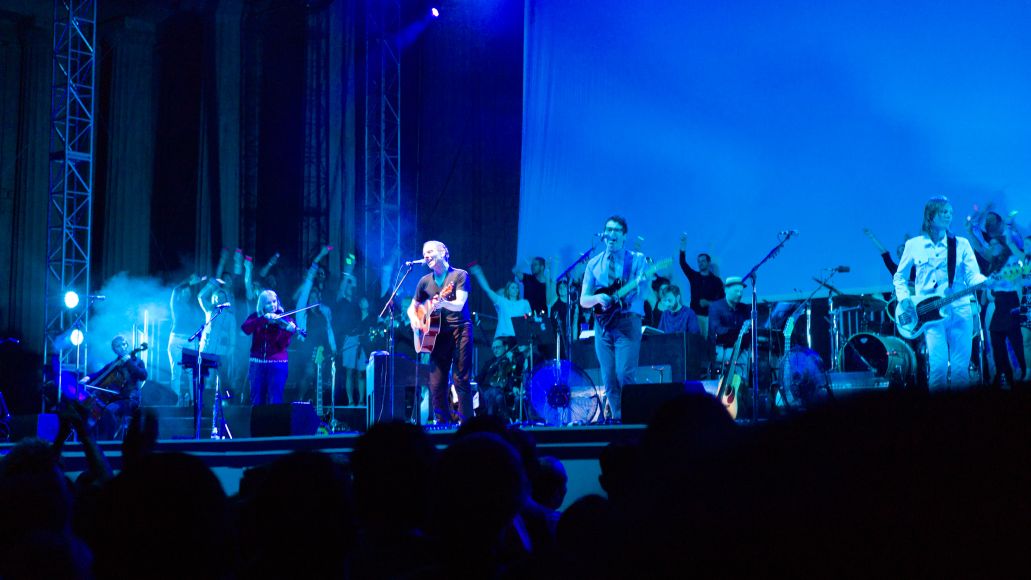 Tracing the nearly two-decade history of Belle and Sebastian, the road is paved with catchy tunes and more somber numbers, a unique aural aesthetic that has lead to a dedicated following. Indeed, it is 50 super fans who responded to a post on Facebook that have spent the day rehearsing with a choreographer in preparation for the band’s Berkeley show and their chance to get in on the fun. For Murdoch, Belle and Sebastian have long been focused on making music that moves people. “We’ve always been interested in dancing ourselves, and perhaps we’ve just graduated to a point where we can actually entertain regular folks on the dance floor without them laughing in our faces.”

No one was laughing in Murdoch’s direction when the band released If You’re Feeling Sinister on the heels of their debut, Tigermilk, back in 1996. The mixture of his Scottish brogue singing thoughtful poems about the way of the world over sprightly strings and horns was a recipe the band has successfully employed again and again. Murdoch admits that the music of Belle and Sebastian has fostered some recurring themes across their discography, but he holds onto an almost personal relationship with every song they play.

“Maybe I’ve just hopelessly got my head in the past, but the songs we play actually serve to draw me back to the moment when we recorded them.” And as to whether a song from 1996 feels different to play now versus then? “[Those songs] put me in exactly the headspace I was in back then. If I didn’t want to go there, I wasn’t feeling it, if it wasn’t feeling relevant to me, we wouldn’t play the song.”

Certainly the band finds “Lord Anthony” relevant, as they escalate the involvement of their audience on the stage, a group seated in bleachers, seemingly giddy with their good fortune. First, four burly guys that one might not immediately know are a Glasgow folk-pop band’s biggest fans step out behind Murdoch as the song begins, picking him up horizontally like a cabaret number from a 1950s movie. Next, they mock a playground fight, with Murdoch dodging haymakers and ultimately running behind his piano to put on a white, lacy dress out of view from the crowd. When he emerges, a young woman leaves her seat in the stands to attempt to apply mascara to Murdoch while he sings, “And if the boys could see you they would pass you right by/ Blue mascara running over your eye.” It is a jubilant performance of immense energy and calculation, which is the band’s sweet spot as they reach what Murdoch terms the “comfortable middle-age” period of their career. 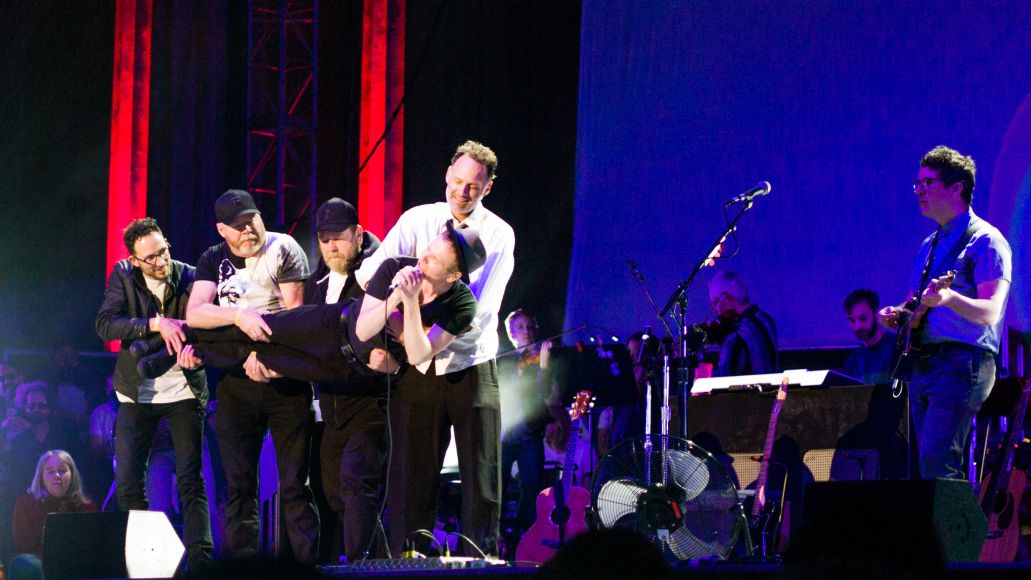 “We’re happily married now, you know?” he elaborates. “I feel like we’re in that stage of a relationship where you stop looking over your partner’s shoulder and start reaping all of the good things about a steady relationship.” Highlighting Belle and Sebastian’s last three records as evidence of the benefits of their post-honeymoon maturation, Murdoch sees the present as a chance to test boundaries, experiment with the band’s sound, and even collaborate more. Speaking of the role producer Ben Allen played in shaping the sound of Girls in Peacetime Want to Dance, he refers to their relationship as “a halfway house.”

“We were looking for the right guy, but at the same time, we were ready to be taken on a trip. That was the nice thing about it – the unexpectedness. We knew that we wanted the LP to move, so we had to find the guy to make that happen. When [Allen] first handed over the mixes, I could see that he had thrown himself into the whole romance of the record and delivered something that was beyond what I could’ve wished for.”

The results speak for themselves toward the end of Belle and Sebastian’s set at the Greek. Before launching into a rousing rendition of crowd favorite “The Boy with the Arab Strap”, Murdoch descends into the front rows of the crowd, pulling willing participants up onto the stage to dance it out for the final two songs of their set, swarming Murdoch and his bandmates in a sea of flailing limbs and smiling faces. Some shout lyrics they’ve known by heart for many years into the nearest microphone, while others move in a euphoric daze, trying to soak in the moment. Despite suffering from chronic fatigue syndrome, an affliction that has cost him many months of unwanted bedrest, Murdoch keeps pace, parading across the stage and reveling in the energy. 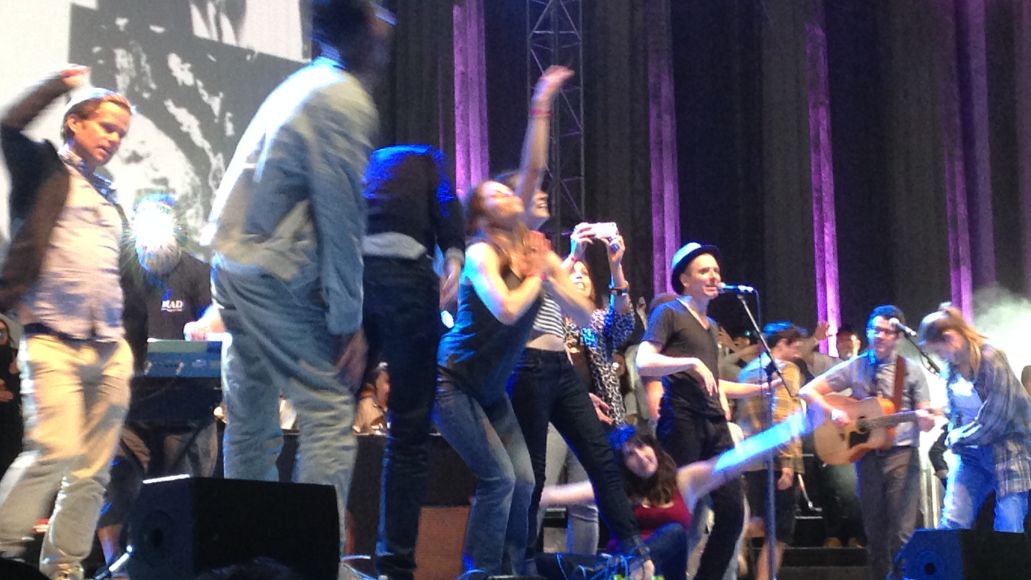 For a man heading a band with nine proper albums released, a published book of his tour diaries, and a film he wrote and directed [2014’s God Help the Girl], it is work that leads to moments such as the one unfolding on the Greek stage that helps keep Murdoch going. “Everybody [in the band] just wants to play,” he explains. “I definitely think we’ll probably end up taking a few more chances. Music is an abstract thing. It’s hard to define. If anybody truly loves our music in 50 years time, I think that would be the most useful thing.”

Fifty years is a long time away, but there is no doubt that the music of Belle and Sebastian, in all its many forms, has found a home in the present. That home is the space that surrounds a man standing on a guardrail, balancing one foot on the hand of an adoring fan, a sky of spring stars shining down, awaiting the next note to sound.

May I Have This Dance? Belle and Sebastian on the Beauty of Getting Old