At my first Bonnaroo, I kept wondering who this “Molly” character was. I felt bad for these stray souls crying out, “Have you seen Molly? I’m looking for Molly!” My Roo-Crew and I took to belting out other female names in a half-baked attempt to poke fun at these misplaced festies. “Stacy?” “I’m looking for Bethany!” “Rebecca, where are you?” Eventually, the lingo was explained to me by my more savvy crew, who informed me that we were actually mocking these people’s constant quest for pure MDMA, the ecstasy base also known as Molly.

So, the other week as I sat watching Madonna make a “surprise” appearance at Florida’s Ultra Music Festival, I cringed. We’ve likely all heard what went down when Madge came out to introduce electronic prodigy Avicii. There, in front of UMF’s 18-years-and-over crowd of sweaty, skin-bearing attendees, Madonna took the stage and screamed, “How many people in this crowd have seen Molly?”

The backlash, as it tends to be in the Age of The Internet, was immediate. Upon hearing of the incident, prog/electro house producer Deadmau5 took to his Facebook, Twitter, and Tumblr accounts, calling her out on being irresponsible for advocating illegal drugs to a crowd filled with “youngins.” He went on to say that while it’s true the electronic dance music (EDM) scene has had historical association with certain drugs, that association has often been a detriment to the genre. To Mau5, Madonna’s reference was a slap to the face of what he and his fellow EDM producers have strived to accomplish in recent years: an acceptance of the genre distanced from illegal drug usage.

Last Friday, another EDM performer spoke out against Madonna’s flub. In an interview with Billboard, award-winning DJ Paul van Dyk called the comment “so stupid,” adding, “I don’t think she was thinking much. The only thing she was probably thinking was, ‘I need to connect with a young crowd,’ and she made the biggest mistake of her career.” If she was indeed trying to connect, you’d be hard-pressed to say she didn’t know her audience. Despite Deadmau5’s and other producers’ attempts otherwise, drugs are still common enough at festivals.

But was it truly the biggest mistake of her career? Perhaps not by itself, but taken in a broader context of Madonna in 2012, van Dyk may be on to something. Recently, it’s as if the Queen of Pop has become afraid for her crown, and her bids to keep it firmly atop her head are getting desperate. 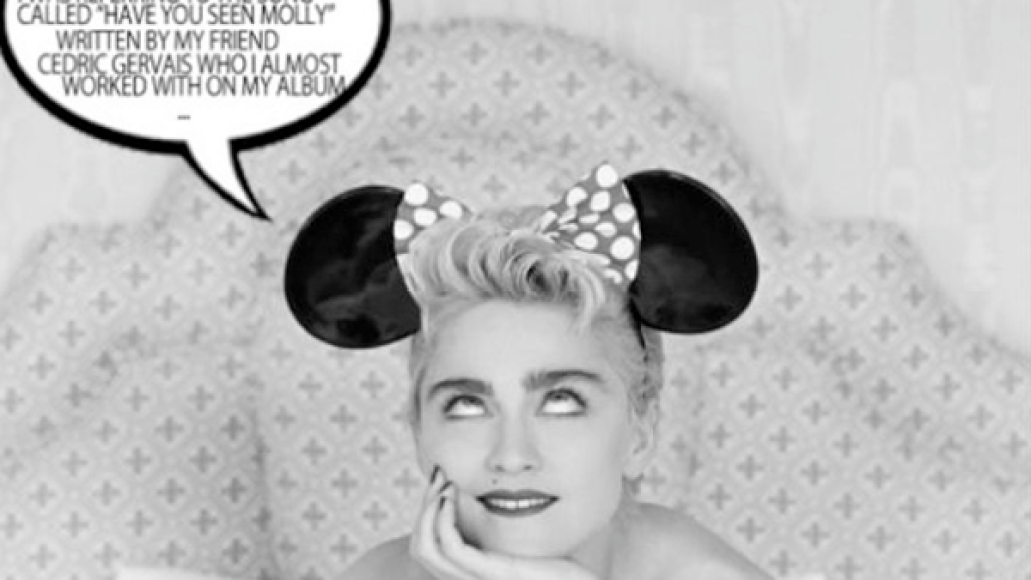 Who me? But I’m so innocent!

First, there’s Madonna’s response to the criticism. In a highly-fashioned Tweet (above) to Deadmau5, she claimed she was referencing the yet-to-be-released song “Have You Seen Molly” by her friend, producer Cedric Gervais, who played Ultra the following day. Gervais himself has stated his song is really about a girl named Molly who just “makes me want to dance,” as the lyrics claim.

Let’s be real. A trailer for the song gives the impression it’s about a girl as much as Lil’ Wayne’s “Lollipop” is about confectionary treats. Moreover, Madge was there introducing Avicii, so a reference to an artist she “almost worked with” seems senseless. The excuse falls short of believable, its dolled up delivery intensifying an air of falsehood.

Aggravating matters further, this comes just weeks after Madonna bashed M.I.A.’s “teenager”-like use of the middle finger during the Super Bowl half-time show (years ago, it wouldn’t have been terribly unexpected to see Madge herself flip off the cameras; she humped the stage at the VMAs, for Christ’s sake). If that was an affront to the “feeling of love and good energy and positivity” of the show, then what was this Molly incident? The event was being streamed live, after all, and those viewing could’ve been younger than those attending the festival. Trying to cover up the misjudgment has only made things worse, implicating her in hypocrisy.

Couple this with her latest album, MDNA, and Madonna is really doing a number on her image. To begin with, the record feels like a mishandled attempt to jump on the bandwagon of “popular” music’s current trend towards EDM. Of course, this explains her UMF appearance and Molly comment. As misguided as it was, she recognized a section of her audience.

MDNA panders by title alone. Even in a world where the slogan “Our prices are Sofa King low” goes unquestioned for nearly a decade, it’s difficult to believe Madonna failed to notice she gave an album rife with EDM influence a title but one vertical line away from MDMA. As if she could trick that crowd so easily; or worse, as if that’s something everyone in the EDM scene would appreciate. The abbreviated title could also be seen as harping onto the etymological trend of vowel-less names currently pervading music (i.e. MGMT, MSTRKRFT), especially amongst-ahem-electronic acts (i.e. SBTRK, CHLLNGR).

Assimilating modern trends is nothing new for an artist who has continuously shape-shifted to keep herself relevant, usually to great success. Forays into turn-of-the-millennium electronica produced arguably some of her career’s best efforts, 1998’s Ray of Light and 2000’s Music. While in those instances Madonna made the genres she toyed with her own, MDNA feels markedly derivative. The dubstep on “Gang Bang” could come from the worst of Skrillex, and the thumping, buzzing electronics of “Some Girls” drown her out entirely, reducing the track to banal club noise.

Taken all together, Madonna’s latest fumbles leave us with a misconceived grab at relevancy from a modern Madonna who’s no longer the Material Girl, but a children’s author, developing director, mother of four, and ardent Kabbalah practitioner, and not the genre-guiding force she once was. That doesn’t mean she’s irrelevant, and her career never will be. Madonna is still the Queen of Pop, the most influential female pop star of our time, and she can still move the units.

But she’s almost out of chances to, as Liz Lemon said, “embrace [her] age with elegance,” and stop bashing her royal scepter over our heads to remind us of her reign. That kind of attitude has already led many to say she’s abdicated the throne to the likes of Lady Gaga or even Adele. She risks seriously scarring her legacy if she can’t find a sweet spot between 53-year-old pop icon and last-gasp starlet with her malapropos drug endorsements. Otherwise, when her career ends, it could be with talk of how she used to be a great Pop Queen, but lost her royal status by knocking off her own crown as she tumultuously strived to hold it in place.

Near the end of the “Girl Gone Wild” clip, she turns towards the camera, spread-eagle, being groped by a handful of half-naked hunks, and coos, “Forgive me.” We want to, Madonna, just stop doing things that warrant apologies.

MDNA in the time of MDMA: The End of Madonna's Reign?