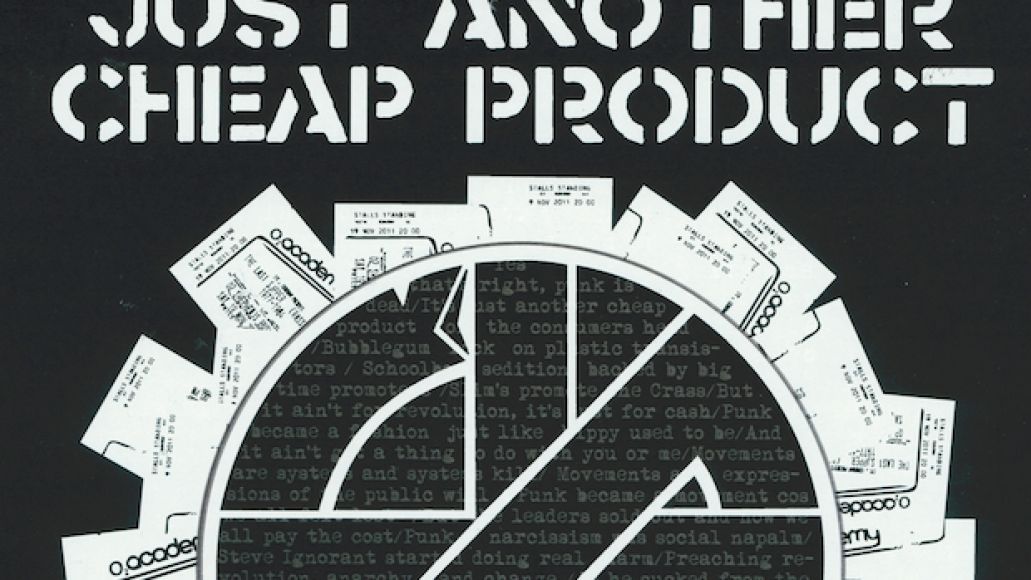 In April 2011, Steve Ignorant’s “Last Supper” tour received a contentious welcome in San Francisco. Ignorant fronted the seminal English anarcho-punk band Crass until their disbandment in 1984, but decided to tour the group’s early material once more in 2011.

With no original members but himself, the decision pitted fans vehemently against each other. On one hand, the San Francisco date sold out. On the other, a cadre of indignant detractors in the city organized an opposing show nearby and protested what they perceived as Ignorant’s calculated scheming and exploitation of Crass’ identity. They stationed a school bus outside the concert venue Slim’s and encouraged attendees to defect and attend a guerrilla show organized down the street. In an age of music squabbles annexed to the Internet, the street-level tactics were refreshing, bold, and resembled the clever subversive activities Crass itself engaged in during the late-70s and early-80s.

Upon formation in 1977, Crass vowed to break up in 1984 as a nod to the Orwellian totalitarianism it likened to England under Prime Minister Margaret Thatcher. The catalog numbers on Crass records even counted down to the year. Despite rising to prominence amongst the so-called “anarcho-punk” scene and arguably releasing its best work late in the band’s lifespan, Crass followed through with its promise. More so, Crass’ activities as an art collective, political pranksters, record label, and group of roommates living communally outside London at Dial House reflected the venom for authority, militarism, and consumerism asserted in lyrics and artwork. 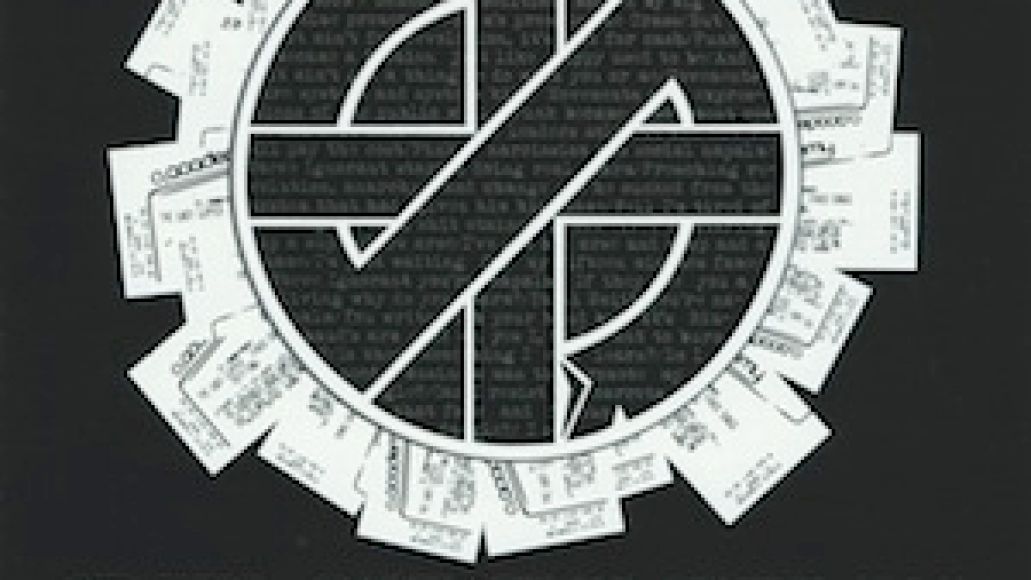 In a punk scene rife with radical rhetoric, Crass backed sloganeering with action. With this in mind, young punks in San Francisco considered Ignorant’s decision to essentially perform as Crass at a large venue with a $21 ticket price a betrayal of the band’s legacy. A printed foldout pamphlet distributed by protestors around the Bay Area before Ignorant’s show detailed these concerns. It concludes positively: “…help us celebrate the music and legacy of Crass, who were instrumental in helping shape the DIY ethics and political consciousness embodied in punk music.” It bore the militaristic white-on-black typeface famously used on Crass artwork. The passionate and articulate two-page communique’s front cover boasted a more brash call to action: “JUST ANOTHER CHEAP PRODUCT… PAY NO MORE THAN $21… APRIL 27 OUTSIDE SLIM’S SAY NO TO CRASS COMMERCIALISM.”

“Pay no more than…” cops the phrase on the cover of every Crass record and every release on its label. Insisting on a fair maximum price was a staunch tenet of the band. The front cover’s center showed Crass’ legendary circular emblem – only ticket stubs gushed from beneath its edges.

Coincidentally, the Crass symbol’s designer, David King, lives in San Francisco. King attended Ignorant’s gig and cheerily calls the protestors “keepers of the punk flame.” Indeed, for politicized punks today more likely pen lyrics inspired by critical theory than swilling beer; Crass created a model, and all of the band’s significance is bound up in King’s design. Next to the Black Flag bars, it’s probably the most common punk tattoo. The emblem features elements of the Christian cross and Union Jack, with a double-headed serpent (since the heads will not actually meet in the design, King rejects the description “Ouroboros”) negating the symbols of power.

Of course, the English-born artist’s relationship to his design and its legacy is more complex than the punks donning it today. King didn’t even mean for it to symbolize a band – the emblem actually predates Crass – but he’s necessarily a party to the band’s influential cult profile and ensuing debates. This, despite the fact that the emblem is a curiosity in the greater catalog of his visual art. In a way, fans and opportunists took the symbol away from King. He moved along, too, but since 2011 King has strove to reclaim his creation, and even update it.

Poised with his legs crossed on a San Francisco café patio with a seltzer water and shot of espresso, King wears a floral shirt, and colorful socks peek out from beneath a pant leg. He looks like an eccentric nobleman lounging incognito. When passersby boisterously shout, he pauses to watch and listen. King expresses complete ideas and frets over grammatical points. He meets every film reference with three more. He swings from nuanced analysis of English class politics to praising obscure American no wave bands. Before coffee, we met down the street at the DIY goods and publications store Needles & Pens, which features an exhibit of his visual art and retooled versions of the Crass symbol. Our conversation begins and ends there, but spans national borders, decades, and class divisions in between. 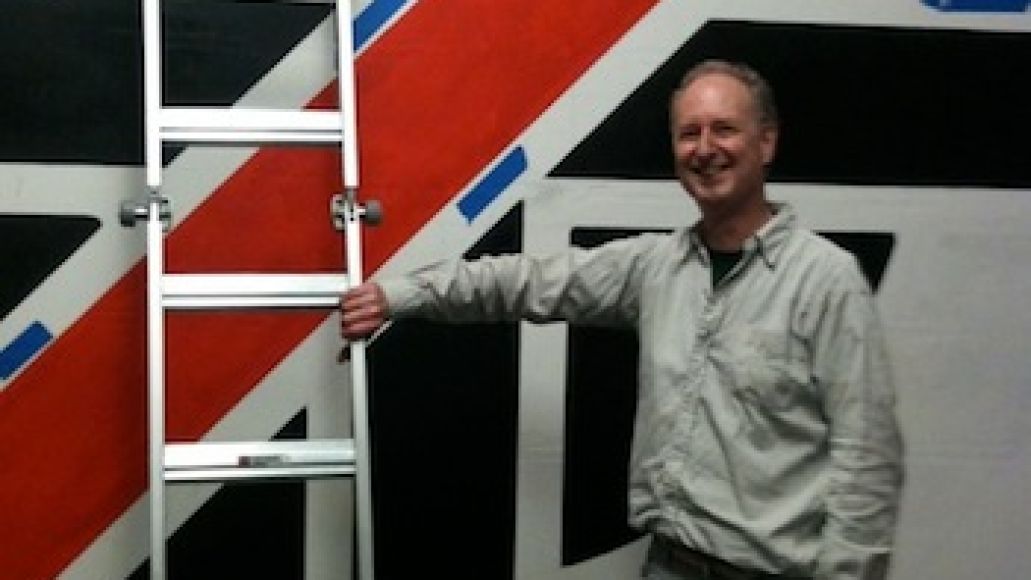 King was born in England in 1948. Razed buildings still sat in rubble from World War II, and food rationings were implemented throughout the country. It was dire. According to King, “Everyone wore dark blue, dark grey, or black. You might have one suit and a dark raincoat. It seemed like the sky was always grey as well. If you took a scan across the streets, everything was grey.” As a young child in the 1950s, King gravitated towards the colorful commercial designs peppering an otherwise bleak environment.

“The only point of color would be the corner store with its big enamel signs advertising cigarettes or soft drinks. There would be beautiful greens and blues for cigarettes. For soda, oranges, reds, and yellows. And then the jars of sweets had bright artificial colors. The comic books and paperbacks were riots of color that were all clearly commercial. They were these beacons of color.”

Enamored with the fantasy and brilliance of these few bright and busy visual oases, King resolved to be an artist, but puzzled the public school system with such ambition. As he remembers, “I went to the career officer in high school and someone said, ‘Oh I don’t think there are any jobs for artists, but I have this pamphlet,’ and… he rifled through his things and said, ‘Oh, here, this says commercial art. Maybe that’s art you can get paid for.’”

The heady design sensibilities of 1960s England were more to his liking. “Suddenly people were wearing floral ties and pink jackets, there was mod fashion, and then there was commercial TV, which had much better graphics,” King says. He met Penny Rimbaud and Gee Vaucher in art school in 1964. Then known as Jeremy John Ratter, Rimbaud later founded Crass, in which he played drums, wrote lyrics, and oversaw the independent record label of the same name. Vaucher, whose collage and gouache artwork adorns the covers of Crass albums and releases on Crass Records, lives with Rimbaud at Dial House to this day.

Not Just Another Cheap Logo: The Story of Crass and David King