Welcome to Life Review, a live review section on Aux.Out that looks to expand beyond the access provided by a concert ticket. Today, News Editor Ben Kaye reports back on another special production by the great gang over at BBQ Films, who celebrated the 20th anniversary of Empire Records in the best way possible: by re-creating Rex Manning Day.

If I was feeling any pangs of nostalgia going into Wednesday evening, it was for two weeks ago when I was in California instead of “this is spring?” Brooklyn. As I entered my friend’s waiting car, I swore I saw snow mixed in with the misting drizzle. On top of that, our esteemed Publisher was on vacation, and the news team and I were feeling run down from carrying the extra load. The fact that it was Rex Manning Day had completely slipped my mind until press instructions were sent out the afternoon prior.

When news first came of BBQ Films’ planned celebration of the Empire Records‘ 20th, I was thrilled. I’d only heard whispers of what the production company had done with the likes of Back to the Future and The Fifth Element. They put on what they call “immersive cinematic experiences,” setting up screenings of fan-favorite films in locations that reference the movies. Populating the venues are a cast of actors playing the roles of characters from the movies. 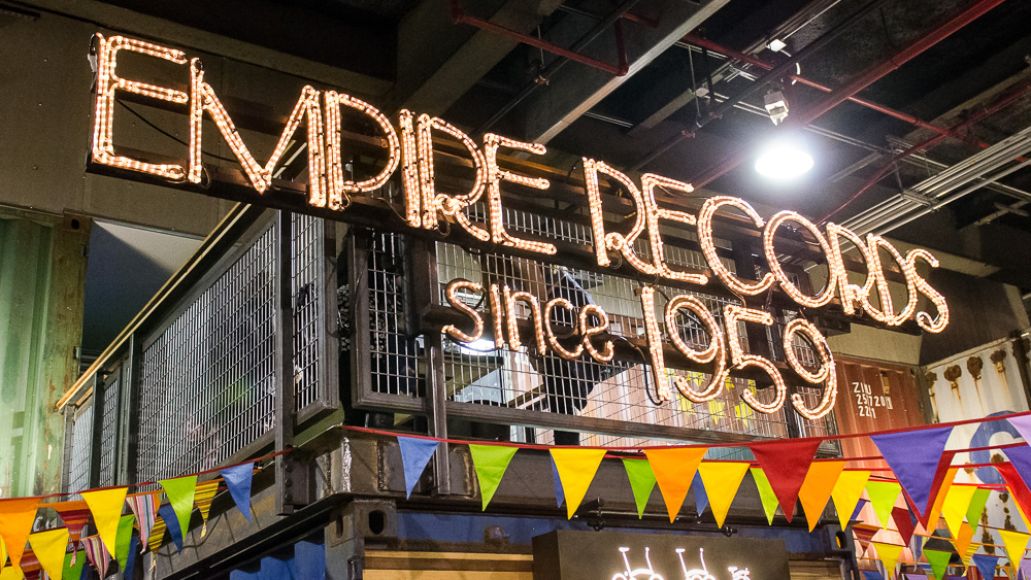 How neat, I thought. Though it had definitely been awhile since I’d actually seen the movie, it remained firmly in my Top 10 Cult Classics list. Back when I first fiddled with GarageBand to blend Punchline’s cover of Counting Crows’ “Round Here” with the original, I slipped Lucas’ “What’s with today today?” line into the fadeout. I fondly look back at the movie as one of the only durably cool things my elder sister introduced me to. How great would it be to revisit the film in an actual record store? Sure, it’d be excellent if Tower Records were still around, but Rough Trade was a fair surrogate.

But day of, I was beat, and I wasn’t looking for a trip down memory lane. I wanted rest, dammit. That is, until I walked into the Rough Trade, and my eyes followed the line of pennant streamers to the store’s upper balcony. On the balcony above the little coffee bar was a lighted sign glowing bright, proud, and just a bit triumphant: Empire Records since 1959. They even got the little circles on the arms of the Rs right. 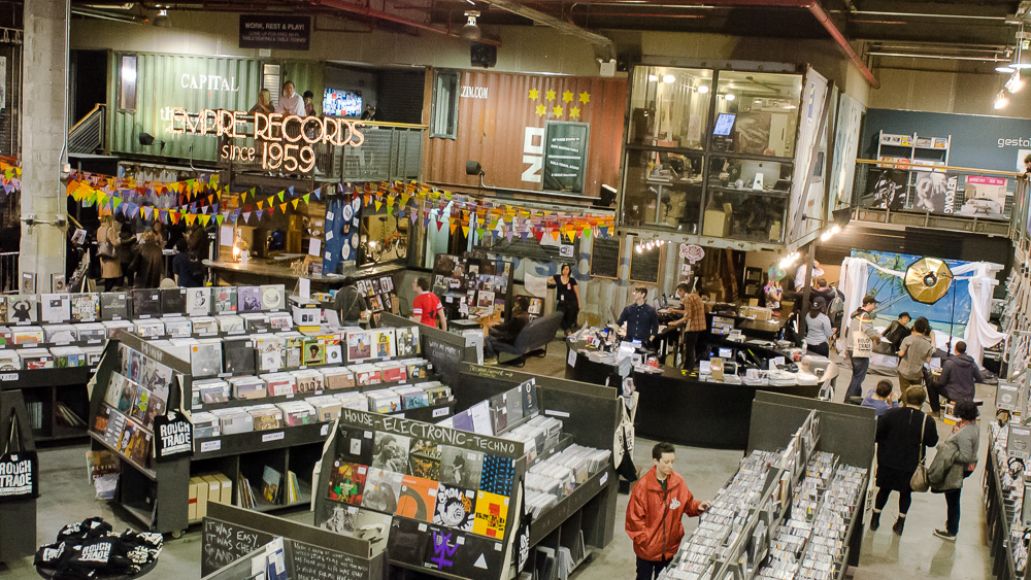 All around were scores of plaid skirts and plaid shirts tied around waists. The amount of people who owned fluffy, midriff-baring blue sweaters was astounding. To the right, a sign for free head shaving that read, “Feeling angsty?” Off in the corner, a photo-shoot setup just like the canopied bed on the beach from Rex Manning’s “Say No More (Mon Amour)” video. Above me as I waited in line for my wristband with a big, dumb grin on my face, an office window with a drum set behind it, and leaning on the glass, a man you knew instantly as Joe.

Suddenly, the ’90s rock on the speakers cut away in a scratch. “Oh, Rexy! You’re so sexy!” That wonderfully corny ode to the booty call came on, and everyone began looking around. Where was it coming from? Was it really him? Could it be? 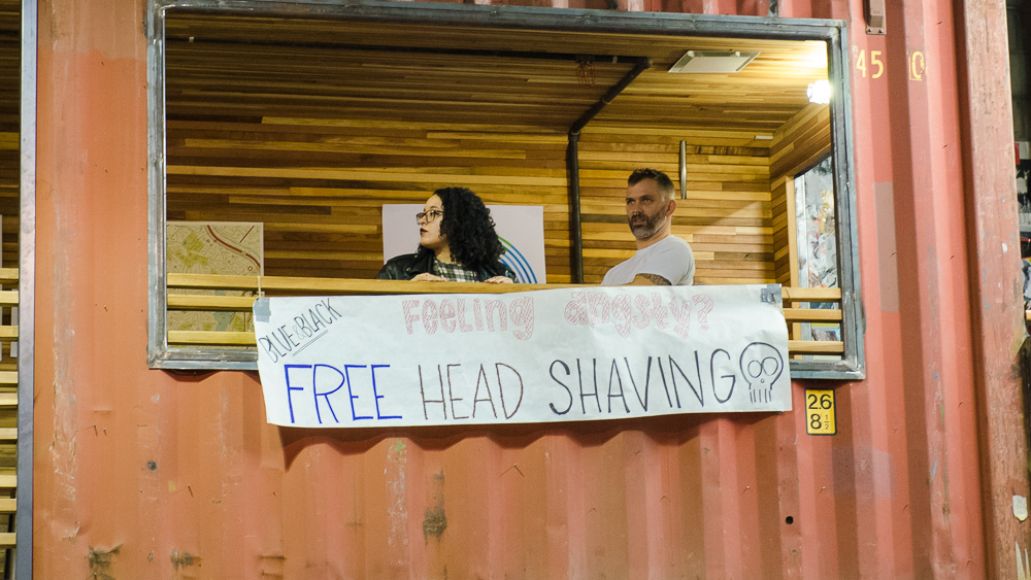 If you stopped for a second and thought about it, as I’m doing now, it was so incredibly silly. We were eagerly anticipating the arrival of an impersonator dressed like a fictional character designed to be a joke in the first place. But in the moment, that’s what BBQ Films had created for us. They’d brought us right into Empire Records — not the movie, but the actual store — and we wanted to behold the presence of Sexy Rexy.

There he came down the stairs from the office, trailing behind him awkward-hatted Jane, a black-laced backup dancer and — oh was it really? — fangirling Gina and Corey. Stone-faced and professional, Joe brought up the rear as they all headed towards the beach scene for photos. A stream of people gave up their place in line to follow these fictional representations of fictional characters. I was one of them, and not just because I had a camera and needed those pictures of the gang being all 1990s’ GQ with the fan blowing their hair back. They were part of another planet, another universe, and I just wanted to be near that. 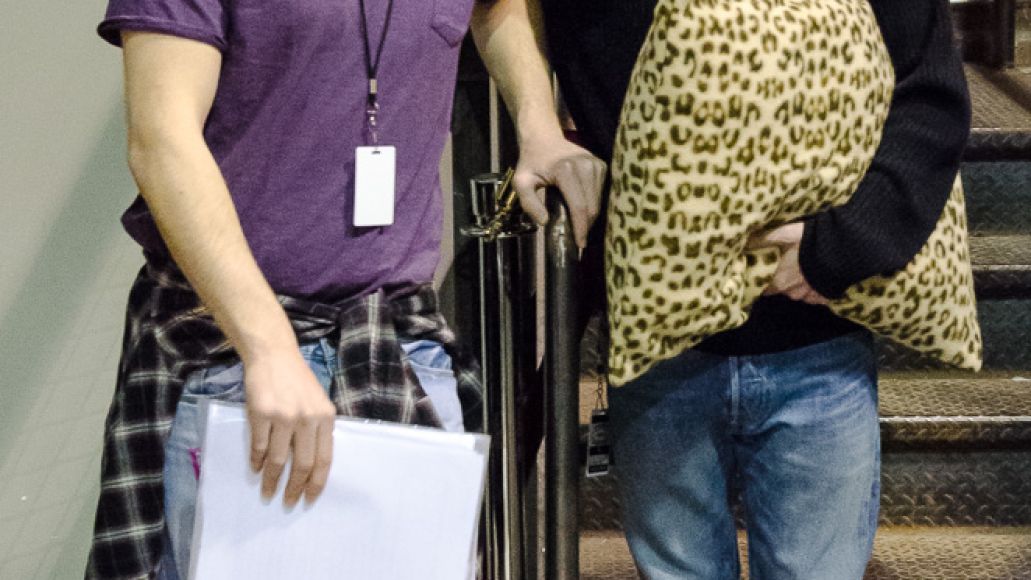 And there it was. As I got back into line and gleefully pointed out the turtleneck-clad, leopard-spotted couch cushion-clutching Lucas to my friend, I felt no weight of the week. But also no longing for the past. This wasn’t about nostalgia at all. Hell, I was nine years old in 1995; how could I be nostalgic for a story about pre-college teenage outcasts banning together in their weirdness when I was still racing home after school to catch Power Rangers? The most wistful moment of the evening was actually at the end, when a cover band calling themselves Shock Me, Shock Me, Shock Me burned through songs like “Til I Hear it From You” and “Good”.

No, what BBQ Films had created was something more akin to Disney-World-meets-Comic-Con. You don’t go to Disney World because you want to meet Mickey Mouse. You don’t go to Comic Con because you want to revisit the innocent joy of characters and stories from your childhood. You go because you love Disney movies and you love superheroes, and celebrating these things with people of similar opinions just feels damned good. After all, stuff like this is the glue of the world. It holds it all together; without this, life would be meaningless. 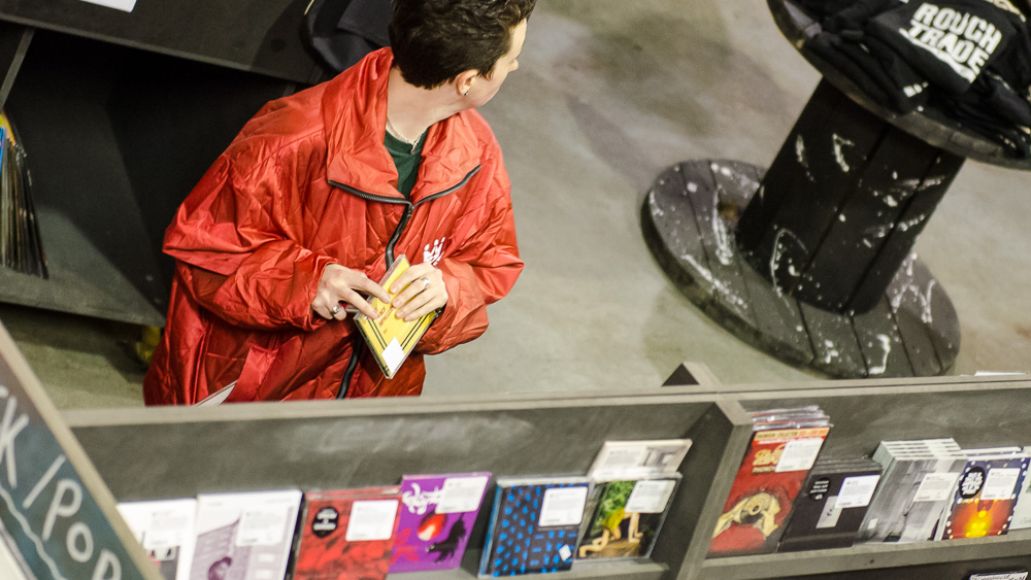 The actors portraying the Empire employees truly augmented the experience. Unlike a simple Cinderella photo-op at the Magic Kingdom or, what actually happened to me, having Spider-Man at Islands of Adventure make completely inappropriate remarks (“Boy, Spidey could really use a warm shot of whiskey on a day like today”), the characters were living their roles. A.J. and Corey’s flirtation grew stronger throughout the night. Joe pushed Lucas around and was only met with the reassurance that he was a superb manager. Warren spoke to no one and stalked the aisles with a magnet. Best and most dedicated of all, Debra started the night with a full head of hair, and ended with it shaved down to stubble.

Then, of course, there was the actual movie, which was played on two screens: one above the stage venue and one up on the balcony. I’ve seen midnight showings of Rocky Horror and The Room, but only once each, so I wasn’t immersed enough to participate in any of the callbacks save for “spoon!” True, this was more about quoting than adding, but the crowd was practically reading the script in their minds. Applause erupted at every new character introduction and every mention of Rex Manning Day or, “Damn the man!” You couldn’t hear lines like “Recirculating!” or “You forgot your thingy!” or “Does Axl have a jack?” from the speakers because everyone around you was saying them. 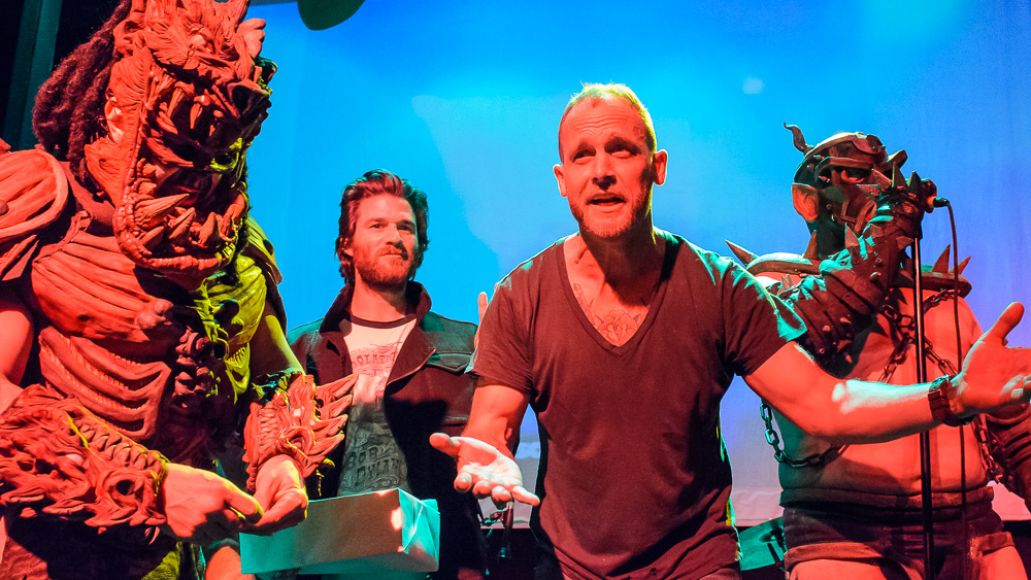 As people giggled through “I love you, Eddie,” the screens began to glitch. The lights came up, and out came three members of GWAR. One of them dragged on the guy who had won The Mark Experience raffle earlier in the night. Dressed in a Chainsaw Kittens T-shirt, the lucky winner — or loser, as Blothar noted — was fed to the World Maggot, just as Mark is in the film. And wouldn’t you know it, Mark himself, Ethan Embry, was regurgitated back up.

“I’ve been stuck inside that maggot for 20 years!” Embry yelled into the mic. I’d briefly met the actor backstage beforehand, and he seemed like a ball of nervous energy. He called the whole experience “surreal,” but was smiling broadly through it all. On stage, he ate it up, calling out to fans and thanking them for being there. He brought out Johnny Whiteworth (A.J.), who was clearly less comfortable standing next to GWAR, and the pair picked winners for The Warren Experience (a “shoplifting” spree) and The Gina Experience (singing “Sugar High” with the cover band). After a big “Damn the man!” and a mic toss, both actors could be seen milling about, taking pictures with fans and appearing genuinely appreciative of the fandom. 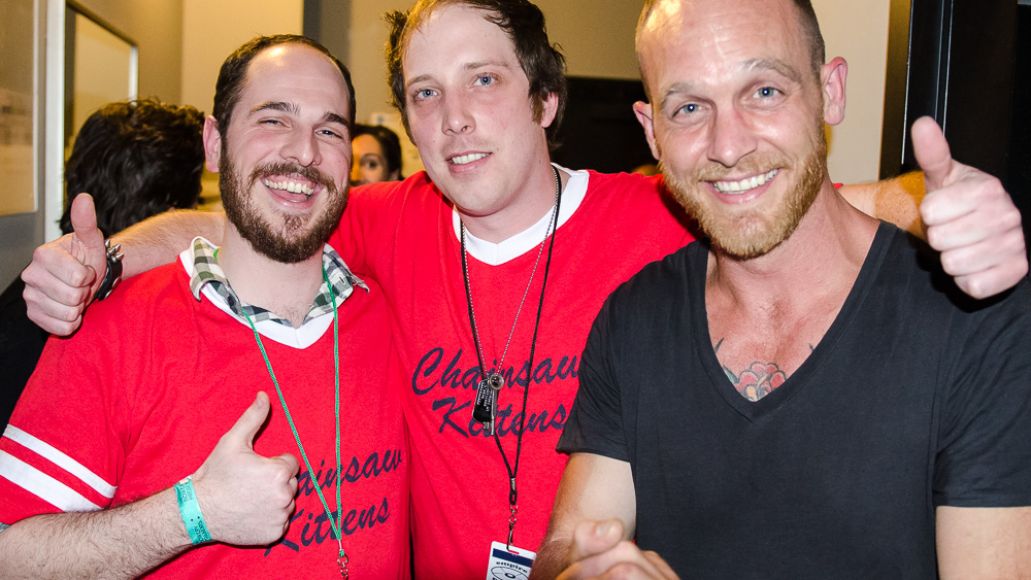 Fandom is really what the whole evening was about, after all. BBQ Films had provided a perfect environment to indulge in the shared love of a film that — classic, cult, ’90s-tastic, whatever — so many of us still enjoy. Not just to indulge in it, but be surrounded by it. Oh sure, you knew those people walking around “in character” were nothing more than paid actors, but damned if you didn’t feel happy for them as they danced up on stage to “This is the Day”.

The people behind these events are the best kinds of fans, because they want to share in that fandom with other people and give them a unique experience simultaneously. I needed a celebration like that this week, something that pulled me out of reality and into something purely about joy. While I wasn’t wistful for the past, I wasn’t bemoaning the present, either. I was enjoying it. And it was perfect.

Well, not entirely perfect. Somehow there was only a single fan with an orange Music Town apron. But oh well, we mustn’t dwell. No, not today. We can’t. Not on Rex Manning Day. 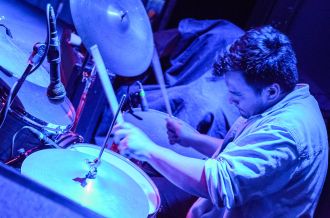 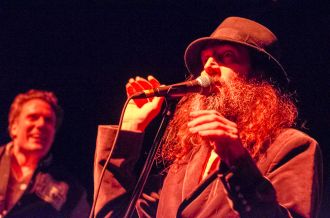 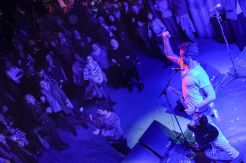 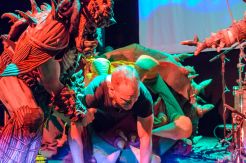 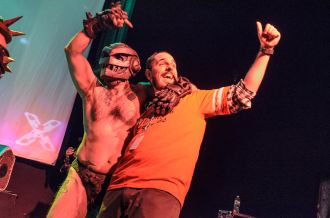 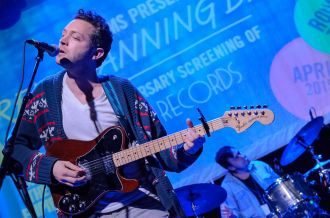 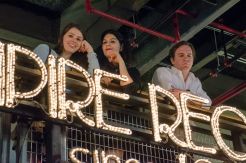 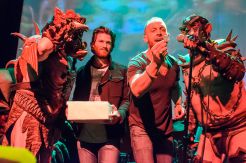 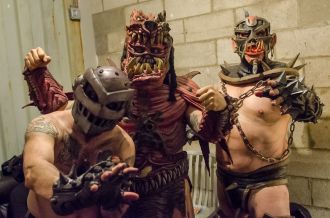