Each month, our Aux.Out. Book Club reads and discusses either a canonical piece of music writing or something fresh off the presses. This month, we followed a young David Foster Wallace and Mark Costello into the Boston underground rap scene of the late ’80s. First published in 1990 and reprinted in late 2013 with a new preface penned by Costello, Signifying Rappers not only documents two Ivy League “white yuppies” exploring their shared enthusiasm for hard rap music, but also marks one of the first sincere, intellectual studies of the hip-hop phenomenon as a serious artistic movement. Read on to see the Book Club’s reaction to the classic Signifying Rappers. 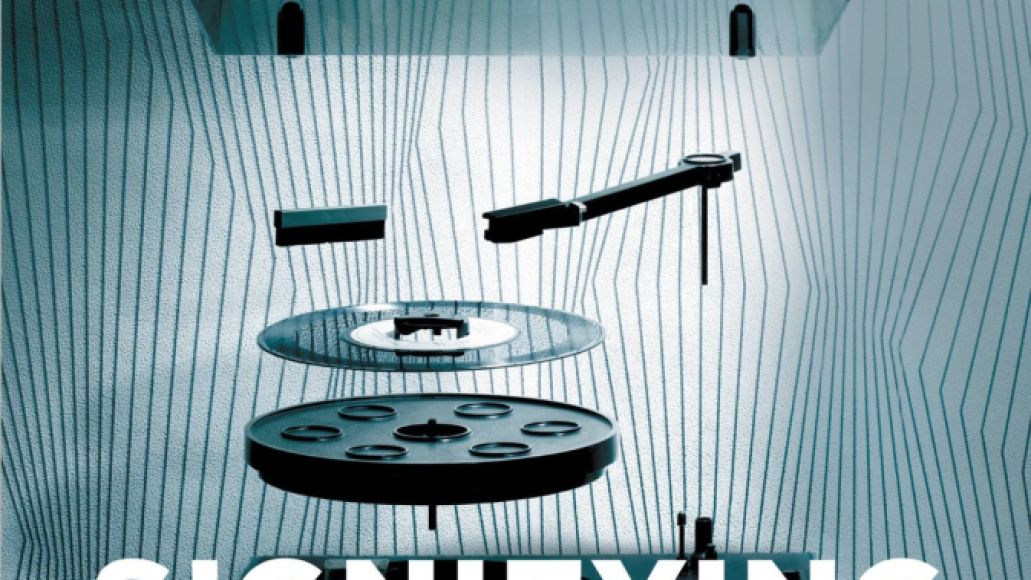 Matt Melis (MM): From the first pages of Signifying Rappers, Costello and Wallace are cognizant of and adamant about being “outsiders”—that is, not Black—in a world of “Black music, of and for Blacks.” Wallace refers to rap as a “closed show.” That’s a far cry from the praise music often receives today for its ability to transcend race and unite all types of people.

Henry Hauser (HH): Well, they certainly write from an outside, privileged, academic perspective. Right up front, they identify rap as a closed art form that’s not necessarily meant to be understood, dissected, or interpreted by white critics and intellectuals. The authors even suggest that rap can’t always be understood or even heard by white audiences. Now, that’s some pretty extreme stuff, and, I believe, fully tongue-in-cheek. What they’re doing is turning the tables on the imbedded rock critic establishment that refused to recognize rap as a legitimate art form. DFW and Costello are blasting back at these detractors by saying, “Well, you’re not legitimate critics because you’ve dismissed rap without every really hearing it.”

Steven Arroyo (SA): It plays a huge part in that element of self-awareness—through which the entire book is laid out. They really poke fun at themselves throughout. “Hey, look at how white we are!” And it was that up-front acknowledgement that allowed them to be so self-indulgent and ridiculous. They never dropped the premise that this is a closed show, we are complete outsiders, and that allows us to be completely obsessive here.

It works on the other hand, too. The book, itself, is a closed show to anybody in that world. Wallace writes, “They were irrevocably outside Our scene, complete woods-babes when it came to the violent & debased world of creative writing/criticism; had not even a vision of such a world… except thru the window of pop media stereotype.”

MM: Which reminds me of them going undercover and trying to talk to people within the scene. They dressed “mean”—scruffy, jeans, bowling shirts—and when that failed, they fell back into the pop stereotype of professors with tweed jackets and elbow patches, and that sort of worked because it was familiar to the people they were trying to get an “in” with. They’d seen it in a movie or on television.

Paula Mejia (PM): At the end of the book, I still hadn’t arrived at a conclusion as to whether I agreed with them on rap being closed to whites. I’m inclined to believe that rap transcends sociocultural, political, and ethnic boundaries in the same way that they talk about rap—as inherently having no structure. It’s pretty much carried by a singular beat, and if you try to dissect it, like they talk about… it’s really easy to accept but almost impossible to dissect.

I love the section… I think it’s Mark Costello. He talks about vernacular and slang, and it’s my favorite chapter in the whole book. But that’s something you need explained to you. Some terms they listed I didn’t know, and I’ve been listening to hip-hop my whole life, but that’s because I didn’t grow up in that environment, and those types of linguistics were closed to me. But couldn’t you say the same for anyone who grew up elsewhere?

MM: This “outsider” take made me think of the hip-hop-obsessed kids at the school I sometimes teach at. Most of my 9th grade students are poor Black kids, and it’s impossible not to notice that rap music resonates with them in a way that it just doesn’t with me—even when a track I love and they’ve never heard before comes on. It hits on a deeper level for them. Maybe it’s because rap can reflect so many aspects of Black culture: language, politics, social views, humor, fashion, resourcefulness out of necessity. There’s a lot of overlap there between genre and cultural identity, which also might be why my kids become very defensive when someone becomes overtly critical about the rap they listen to. When you attack their music, you’re, in a sense, attacking them.

PM: I’m struggling to think of another genre that’s as territorial as rap. It’s incredibly bound by location and time period. It was probably in a review of some pop album, like Miley Cyrus’s Bangerz or something, and someone wrote that while her point of reference her entire life has been hip-hop instead of pop music, it’s still not right that she’s appropriating this music because she’s a white girl.

Years ago, it wasn’t the same as it is now in the sense that now we can be lovers of all different types of music. Genres were very divisive then. In the ‘60s, when rock criticism was emerging… people, like Lester Bangs, Robert Christgau, and Ellen Willis, had to defend rock music. Now, you can be a lover of all types of music, but people get very territorial when you’re calling it your own music, when you’re using the possessive.

PM:  It’s an entire cycle. You could dissect every genre and see how it appropriated something else. Like, rock would not be rock if it didn’t appropriate the blues. Hip-hop is so indebted to jazz and funk. I had an argument the other day with a friend who is a big hip-hop head, but he can’t listen to jazz music on its own. And I told him, “You do realize that so many of these samples are from Art Blakey and Miles Davis riffs, right?” The foundations of contemporary hip-hop music stem back to those artists who laid down the foundations of those earlier genres.

MM: And notice Costello has no problem blasting Aerosmith—calling them a Zeppelin rip-off, I think it was. This goes back to Paula’s idea of ownership. He’s not as quick to dismiss Run-D.M.C., though he will say that they’re making music that’s not strictly for Black people. Costello’s careful about how he talks about another racial group’s music. You can think of that as an example of—rightly or wrongly—knowing your place and what’s yours to praise or criticize or, on the flip side, as showing respect to something outside your own experience—the opposite of the dismissal of rap by white rock critics that Henry spoke of earlier.