Component is a section of  Aux.Out. for one-off pieces, special editorials, and lost orphans of the music discussion. Today, Hilary Saunders connects the passions of Andy Revkin, journalist for The New York Times and musician, through his gift as a storyteller.

Listening to Andy Revkin’s folk ballad “Arlington” holds a special sort of meaning around Memorial Day. One hundred and fifty years after the first burial at the famous Northern Virginia cemetery, the middle-aged songwriter’s words resonate with an eerie relevance, almost foreboding.

Revkin’s nasal tenor, not unlike Pete Seeger or Bill Monroe in their later years, rings out as he wonders, “Where will they go when there’s no more room in Arlington?”

The bugle-imitating trumpets bleat upon mention, and the rhythmic banjo picking helps keep the regimented beat. He and singer Dar Williams trade verses in the most beautiful sparring of rationality and national responsibility. “Arlington” isn’t a protest song exactly, but it’s certainly politically relevant today. And most importantly, it’s factually accurate in every way.

Probably because Revkin is a veteran journalist and a fine one at that. He runs the Dot Earth blog on The New York Times, while also teaching communications and multimedia classes as a Senior Fellow at Pace University.

Even outside of these professional roles, Revkin is the consummate storyteller. Whether meeting for winter beers in an empty bar in Times Square or Skyping from his home in New York’s Hudson Valley, he always has a compelling story to share—of traversing the world in a sailboat after graduating from Brown University, of how his feature profile on Judas Priest for the Times inspired the 2001 film Rock Star, or of fixing his very first guitar as a teenager. So too Revkin’s songs fall in this natural (and often, quite literal) line of storytelling.

“‘Arlington’ is a great example of the kind of song that a person like Andy can write,” lauds Williams, the most recognizable pop musician to guest on Revkin’s debut record. “Whether it’s his journalism or the depth of his musicianship or the way he shows up for issues here in the area, he’s always taking the long view. To know something in his view is to know all the perspectives—to know the science and to know the history.

“He draws a poetic picture, but juxtaposes it with its history, which deepens the song … It’s nice to see someone putting that extra dimension of time and story into a present mediation on Arlington.”

Music may have preceded journalism in passion and piqued interest, but Revkin has only recently focused on songwriting in a professional sense. In November 2013, he self-released his first album, A Very Fine Line. Most of the 10 songs fall into a traditional bluegrass, folk, or Americana classification. Lyrically, they tell quite literal stories ranging from his home city (“Between the River and the Rails”) to his grandfather’s Cadillac (the aptly titled “Grandpa’s Cadillac”) to the population’s usage of fossil fuels (“Liberated Carbon”).

“It’s a new thing,” he begins. “Here I am, 57 years old, learning an entirely new environment than the one I’ve been reporting on for all this time. I’ve been songwriting for a while, since the early ‘90s, but I just never got serious about recording it and then getting it out there until [now].”

Revkin is a quick talker and uses the calculated language of writers. He speaks in similes and chooses words with precisely the right meaning for the messages he wants to convey. He fact-checks himself mid-thought and writes notes with pen on paper.

And when a particularly exciting story seems relevant, it shows in his eyes—through laptop screens and his rimless glasses—spreading into a grin framed by his graying goatee.

“I’m selling my albums through Amazon.com. I send them a box of CDs, they satisfy the orders, and I get a little email every time someone buys it,” he explains evenly enough. “They give you the option of contacting the buyers for feedback, and so I’ve been sending this note back to people: ‘Thanks for buying my CD and supporting independent music. I’d love to know how you heard about it.’ That helps me figure out what works.

“I didn’t get any responses until today! A guy in California emailed me back … Amazon.com has a new releases page, and he’s just one of these people who sifts through music. He just listens and he bought it,” he exclaims.

With an encyclopedic knowledge of Broadside balladry, the Delta blues, and American folk traditions, Revkin’s influences clearly shape his output. He performed with Pete Seeger (“just as one of the backup guys,” he adds somewhat bashfully), and Seeger even scribbled some suggestions for “Arlington”.

Revkin was one of the few who saw Seeger in the hospital before he died. He had mentioned previously his favorite Seeger song was an obscure tune called “To My Old Brown Earth”. Says Revkin, “He wrote it in 1958, and it’s essentially an epitaph … Every word has an edge like a nice cut stone.”

He starts to sing the old ballad, loosely and lightly over the call, “To my old brown earth and to my old blue sky/ I now give these last few molecules of I.”

The weight of it all now feels heavy, with Seeger’s passing in the spring and knowing that without the impetus from a medical crisis of his own, A Very Fine Line may not have happened.


In the summer of 2011, Revkin suffered a stroke. It came as a shock, as Revkin’s verified Facebook profile shows photos of him hiking and traveling and engaging in other active pursuits. He recounts soberly, yet, objectively (as his 30-odd-year profession dictates), “In 2011, I’m running with my son, and my eye goes weird. The next thing I know I’m having a stroke.”

Editorializing only slightly, he continues, “I’m really lucky. I took some aspirin almost on instinct, which thins your blood, and that probably prevented it from being a much more damaging stroke. So, for about a month, these fingers were not working,” he says while drumming the fingers on his right hand in mid-air.

Even hospitalized, Revkin blogged about his stroke and filmed videos about his recovery.

“It’s a form of denial. It’s how I separate from the emotional reality of it. We all have our mechanisms for dealing with stuff. For me, I think intellectualizing what happened was a way to set aside the more emotional aspects of it—confronting your mortality and your incapacity,” he admits.

Paraphrasing an article he wrote for the Times, he continues, “Run-ins with the reaper work in two ways. They make you, to some extent, want to slow down and smell the roses and hug your family and be more human. But in some ways, at least for me, they make you want to speed up and get everything done because it’s transitory and fleeting and unpredictable. For me, that side definitely won out. Whether that’s good or bad, that’s hard to know. But I do have this tendency to want to get it all done.”

After his medical clearance, Revkin felt clear-headed and determined. Although he cites residual effects like stumbling over words, it’s not noticeable in conversation, and he works to improve the limited dexterity in his chording hand.

The stroke also pushed him to reach out to the strong community of musicians and friends living in the Hudson Valley and continue to perform live. He sought to reconnect with those old folk traditions not only stylistically through his own songs, but also in its fabled sense of community—of using music as a source of news sharing and unity building.

As Williams considers, “When it comes to music making, it’s not his age demographic per se, but he inherited that belief that there’s this democratic imperative that you get involved with your community, you find out who your neighbors are, you reach out to people who could be kindred spirits, and you enlist professional musicians into making music in the community. And then there’s the rigorous journalist in him—you cannot fall for trends and fads, pseudo-science, cynicism, or half-heartedness. His vision really has a backbone to it.”

Even the way Mike Marshall, a renowned classical mandolin player who performs on A Very Fine Line, got involved illustrates Revkin’s devotion to realizing this project.

Skyping from Cologne, Germany, Marshall recounted a three-day private conference at which he was invited to perform and Revkin attended.

“I was the musical segment between each of the lectures,” he recalls with a chuckle. “I played six tunes a day.

“The last night, they did a big dinner and jam. There were a few people who played instruments, and he just got out his guitar and started playing. I got my mandolin, and we started jamming. He said, ‘I wrote this little tune for my wife. Check it out.’ And he started playing it, and I just played along.”

That initial improvised performance served as the foundation for their musical relationship. Even without staying in close contact, Marshall remembers, “About six months after that he said, ‘Hey, you know that little jam we had? I wanna put that out on a record!’ So I said, ‘Well, send me a copy of it. Lemme hear what I did.’”

After re-assessing his original licks and re-recording his lines in his home studio, he sent the overdubs back to the team of friends at Joe Johnson’s studio in Beacon, New York, who recorded and mixed A Very Fine Line. That instrumental, “Song for Lisa”, closes the record. 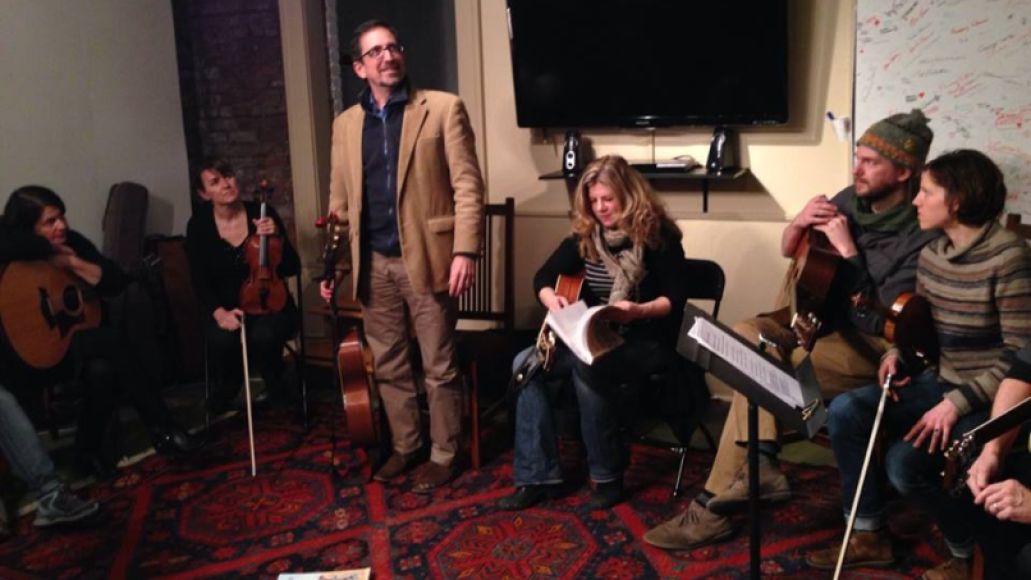 
Revkin posts on Dot Earth every time his songs or performances align with his editorial mission. It’s his form of cross-platform self-promotion for A Very Fine Line until he can record his next projects, possibly an EP of C. Fox Smith’s nautical poems set to original music or another full-length LP that delves deeper in the emotional realities of his stoke, love, and loss.

“Music is like writing generally,” he offers. “You can do anything with it. Everyone can use it differently; it’s like different tools for different people. And for me, it’s mostly a celebration of the world as it is.”

But when he reaches an impasse in his environmental reporting, or debates with politicos of differing opinions, music often becomes the means of mediation.

“It’s a way to bridge gaps. I disagree with Josh Fox, the filmmaker who made Gasland, on a lot of things … But we did this event, panel discussion at the Hamptons International Film Festival after his screening of his film, and he pulls out his banjo—he’s a good banjo player! I pulled out my guitar, and we sang a John Prine song called ‘Paradise’, which is about coal.”

We trade quips on which politicians are musically inclined, like how John Kerry played bass in a band in high school and how Mike Huckabee plays bass in a band now.

“I’d like to spar with him on global warming,” states Revkin, “But I think we could also sing about Cadillacs.”

Stroke of Luck: How Reporter Andy Revkin Beat The Reaper and Recorded an Album