Component is a section of Aux.Out. for one-off pieces, special editorials, and lost orphans of the music discussion. Today, Daniel Kohn takes us to Hong Kong and tells the story of a record store unlike any most have ever seen.

There’s plenty to see when you get out of the MTR station in Sham Shui Po in northwest Kowloon. There are people, lots of people, and blocks of storefronts ranging from run-of-the-mill fabric shops to hardware supply stores. See, I’m on my fourth trip to Hong Kong and standing in the middle of what could be called its garment district. And yet, I’m here in search of a man who people say has the best records in the island region. Sound a bit weird? Well, that’s because it is.

Finding stores in Hong Kong is an adventure. Few buildings have visible addresses, and the ones that do share numbers with multiple places. So, as I turn down a market road and peek into a strange building with a narrow hallway, you can only imagine how surprised I am to see an older Asian man signal me to come into this strange building’s lobby. “He’s expecting you,” he says, and I think I’m in The Matrix or something. Traveling up a creaky elevator, I’m not sure whether I’m walking into a record store or about to be kidnapped. I’ll have a story to tell, either way.

The elevator opens on the fifth floor and I notice boxes, lots of boxes, in the hallway. As I head towards a door obscured by cardboard, I look down and see flyers for future concerts in Hong Kong. Before I can reach for the doorbell, out pops a tiny Asian man. This is Paul Au.

I first learned about Paul through a record collecting blog, which is funny to him considering he says he has no idea how to use a computer, much less build a website. Yet, here we are in a room that, by American standards, is comparable to a tiny New York City studio apartment. And it’s filled wall-to-wall with cardboard boxes of records. 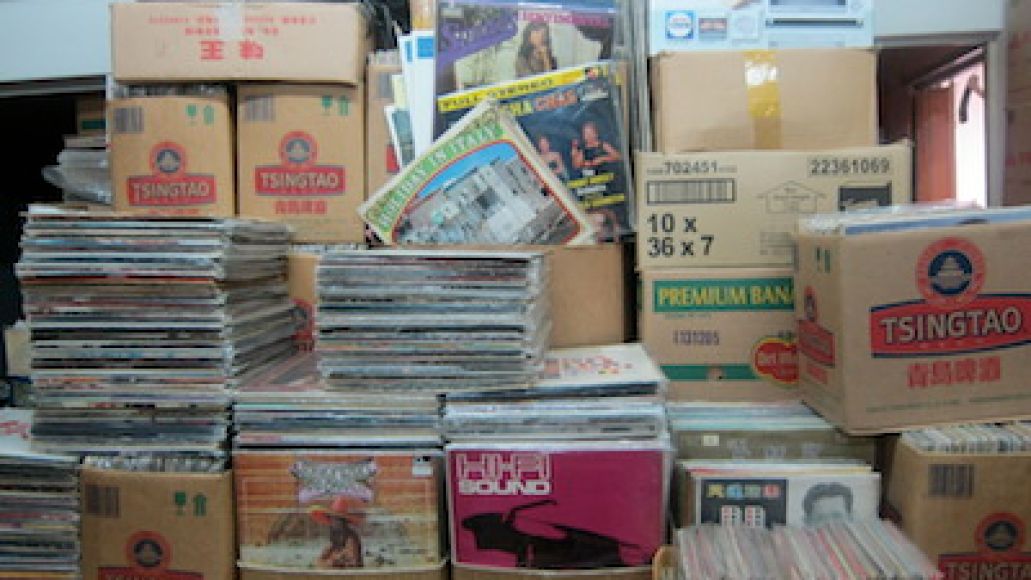 As I look around, I notice each box meticulously labeled by genre, band, and the like. Paul shows me some stuff he thinks I’d like, and of course, I do. Fortunately, I ask him about himself.

The last place I expected to be in Hong Kong is in a makeshift record store. Hell, it’s hardly even a store. But for Paul Au, it’s something. Born in Vietnam in 1957, Paul was given this English name by an American teacher when he was six. He doesn’t give me his birth name because “this is who he is now.”

He first got into music at a young age when one of the guys in his neighborhood was in a cover band that played the likes of Iron Butterfly and Santana, introducing Paul to a world he never knew existed. Over the next few years, the sounds of American rock bands like Creedence Clearwater Revival and Grand Funk Railroad became the soundtrack to his life. To make things easier, Paul acquired these bands’ albums in Saigon when American G.I.s left them behind during the Vietnam War. Paul hung with an older crowd that loved the taste of American life and culture. The romanticism of the counterculture of the late ’60s appealed to Paul, a self-proclaimed hippie. So, when his friends were called upon to fight in the Vietnam War and didn’t return, it left a lasting impact on his life. Seeing her son’s pain and knowing that he might be drafted once he turned 18, Paul’s mom put him in a shipping container – literally – with the final destination being Hong Kong.

Paul slowly started acclimating to life in Hong Kong, which is only a 90-minute flight from Vietnam, and his love for rock music never waned, even when the rich island’s had. He started collecting records when he first moved to the Shin Shui Po area from Hong Kong Island, with many of the island’s used record stores located there. He doesn’t tell me what he did for the first eight years he was in Hong Kong, but when the conversation shifts back to the island’s music culture, he seems engaged.

“There weren’t many dealers that into the rock culture. They were only selling the records for the money,” he laments to me as we sit on makeshift chairs in his shop. “I was really crazy and into the culture, and I would collect everything. The spare ones [records] I’d sell in order to buy more of the ones I wanted. I was selling to support my collection.”

From the mid-to-late ‘80s, he started noticing that people – many of whom he suspected were wealthy and worked in the city’s predominant financial industry – were discarding their vinyl records in favor of CDs and cassettes. After walking by boxes of records one day, he decided to start taking them. In this case, the old cliché that one man’s trash is another’s treasure couldn’t be truer.

“The records didn’t deserve to go out like that,” he explains. “The rich like music like jazz, so there was no place for these rock vinyls. Whenever I saw the vinyl discarded, I made it my life to save them no matter what the cost.” 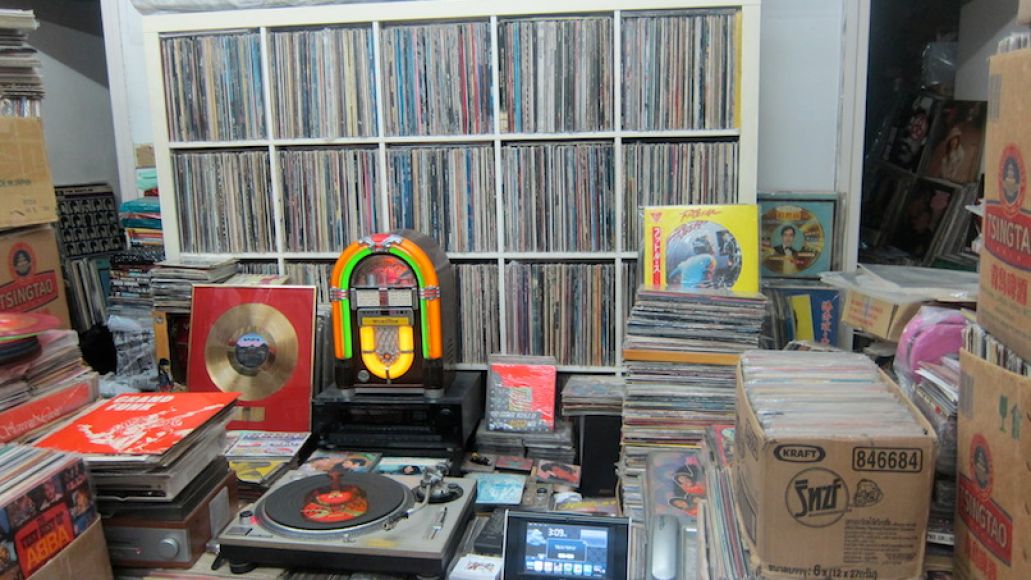 In his case, the cost ended up being housing. Though he’d sell his records on the street at one of the city’s vibrant markets during the day, Paul had no place to store them at night. Fearful that someone would steal his precious items, he would sleep on the street with his collection nearby. Some nights, he wouldn’t sleep at all, which was perfectly fine with him.

“I was very poor and didn’t have a shop or job,” he says. “I consumed very little and only wore used clothing, and I slept on the street, like a hippie, because I didn’t have any storage for the records. I didn’t mind, though. I needed to guard my records.”

When he first started, there weren’t many people selling used records outside the shops in his neighborhood. This allowed for the crazy hippie from Vietnam to carve out a niche for himself. News segments were dedicated to him, and his profile started to grow.

His love of collecting steadily became a business, and a somewhat successful one at that. In his small room, Paul has over 35,000 albums filed in similar fashion to a card catalog system, but without the catalog. He somehow knows what every box contains and where each vinyl is located – impossible for most but somehow reasonable to Paul.

Word of mouth has spread about Paul’s shop, attracting both obsessive record collectors, like myself, and musicians. In 2007, DJ Nu-Mark of Jurassic 5 heard about Paul from Nee Bing, the promoter of his Beijing show. Nu-Mark was very skeptical when he stepped out of the MTR.

“It was strange to me,” the DJ explains about his first time at the building. “One of the boxes was titled ‘No human beef’ – whatever the hell that means. The elevator on the way up to his shop had these vintage numbered buttons that I couldn’t stop staring at. It wasn’t until I walked into the shop that I became at ease.” 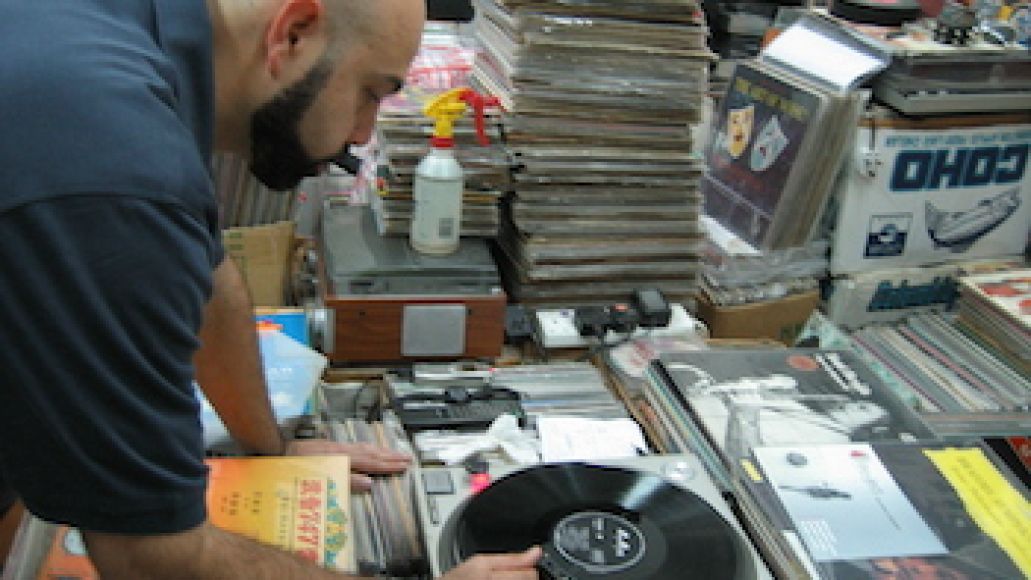 On this particular dig, he picked up some of the rarest Asian funk he’d ever heard, stuff he’d never find back home and never knew existed. His experience with Paul was similar to mine. Nu-Mark found a guy, unlike other record collectors/dealers, who genuinely enjoys what he does and whose love of music trumps almost everything else in his life. Even when things got tight, Paul was willing to sell his other prized possession, a Harley-Davidson that he took riding every week, in order to keep his record business afloat.

“He (Paul) really seemed to be very much at peace with himself and was an extremely happy man, especially for being a record dealer,” Nu-Mark recalls. “Paul had an ear-to-ear smile and loved to share his music with me.”

Once he had a place to house his records, Paul established ways to preserve, and thus maintain, a collection of rare, out-of-print vinyl that collectors from around the globe wouldn’t uncover elsewhere. To beat the unforgiving humidity, he sprays water on the records that have too many snaps, crackles, and pops in them in order to hide their condition. These are tricks only the Yoda of the Hong Kong record community would know.

Finally, after nearly 45 minutes of being shown rare Japanese pressings along with hard-to-find, coveted bootlegs, it’s time to go, but not for the reasons you’d think. A knock on the door doesn’t signal fellow customers but rather the arrival of the police. Remember those records in the hallway? Well, yeah, they’re a fire hazard, and the fire department makes one of their routine stops to get to the bottom of this. This is my sign to go but not before I make off with a haul of rare Hong Kong pressings, for which Paul charges about $60HK (about $8.20 US) per LP. The price goes up for more obscure countries and pressings, but on this day, I make out a winner.

Over my shoulder, I see Paul having a discussion with the authorities. He argues about his records and explains the degree to which he goes in order to save them and make sure they end up in worthy hands. I swear I can hear that passion when I listen to them.

Daniel Kohn is a freelance writer based in Los Angeles. His work can be seen in LA Weekly, OC Weekly, FILTER, Vice, and more. You can follow him on Twitter.