Component is a section of  Aux.Out. for one-off pieces, special editorials, and lost orphans of the music discussion. Today, Dan Bogosian applies his knowledge of music theory to an unlikely candidate for analysis: The Blood Brothers.

When Owen Pallett analyzed Katy Perry’s “Teenage Dream” using music theory, I was disappointed — not because of his writing skills, which are excellent, but because I outright didn’t agree with his analysis. Rather than acknowledge that he possibly could’ve gotten the key or tonal center wrong, his article praises the song for its lack of a I chord in tonality when it’s just in a different mode, Lydian. All this is a complex way of saying he and I don’t agree on what is actually happening musically … but I loved the idea of showing why things sound interesting in musical terms, rather than just relying on verbal wit.

There are an infinite number of pop songs that have brilliant moments in musical theory, but I’ll let Pallett handle Daft Punk and Lady Gaga. From my time as a music theory major in college, I always thought analysis was best used when you knew something unusual was happening but couldn’t quite put your finger on what, when you heard a rhythm change that felt organic but weren’t sure why, when something was disjointed when you played it back in your mind but not when you heard it out loud.

I didn’t want to explain the genius behind a four-chord progression or how a diva uses large, melodic jumps to become memorable.

I wanted to explain the madness of The Blood Brothers’ “The Shame” from Burn, Piano Island, Burn, particularly the genius of Morgan Henderson’s bass line. 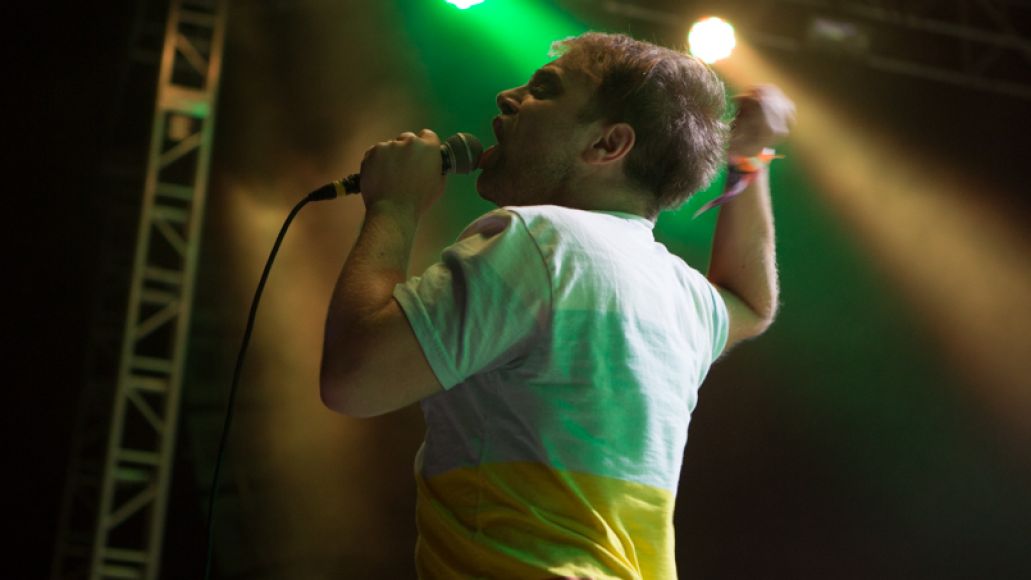 In the first verse, everyone is in 6/8 performing a simple waltz; the guitar outlines a chord progression of Am, G, F, E (or I bVII bVI V in A minor) and the bass pedals over the root key of A, playing a line that’s oddly funky but nothing too extraordinary. At the first chorus, the guitar and keys fade into A, G#, C, G while the bass does another version of pedaling on A.

Because the bass focuses so much on that A, we know A minor is the key. We feel it as home even though it rarely appears as a full chord beyond the first measure.

For the second verse, the guitar and piano outline a chord progression of Am, G, C, E (or I bVII bIII V in A minor). The bass continues to harp on one chord, only this time it isn’t really A minor: Henderson syncopates a walking jazz line that is nothing more than a C major scale. He starts it on A, so it doesn’t feel like a key change, but after the first measure, he just walks off-time.

It’s one of those things that looks odd on paper but sounds totally normal when it comes in (0:47).

After doing this, the song goes into a sound more typical of The Blood Brothers: everyone locks into a heavy, moshpit-inducing breakdown with hell-fire vocals. There’s nothing particularly clever here, nothing particular worth analyzing unless you want to be obsessive to the point of noticing there’s an extra rest after one phrase.

I’m going to ignore that because I don’t think noticing it adds any value to an untrained listener. It just gives something for dorks like me to talk about.

The real meat of the song comes during the outro, or the final chorus. 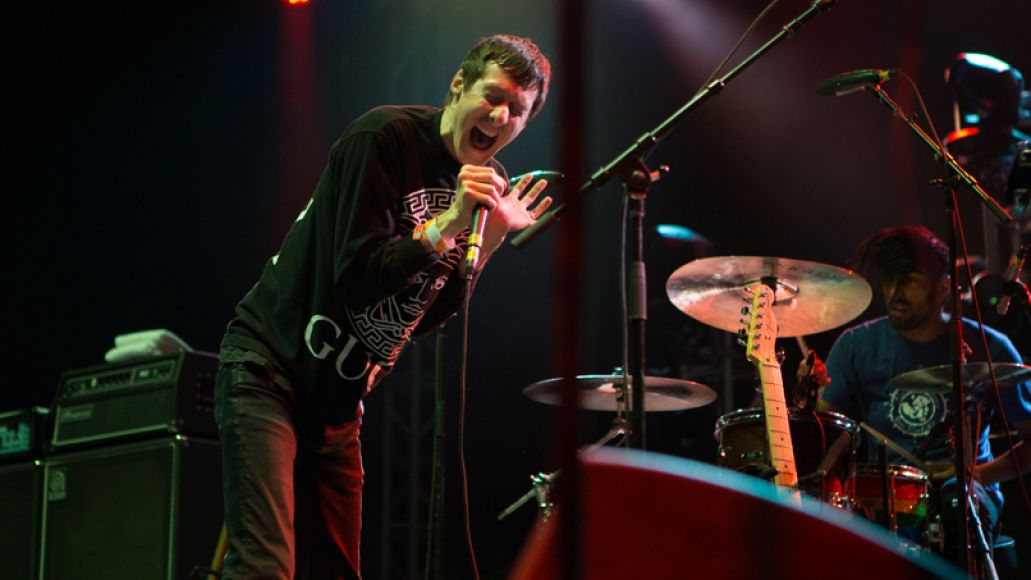 The outro gets closer to something Stravinsky attempted than any other artist ever completed: it uses offset chord progressions to create a different set of music with each pass through. The guitar and piano do volume swells with each measure change of 6/8 on octaves of four notes: A, G#, C, G. Looking at it, it appears to be in A minor (and it sounds that way too), but without other notes, this doesn’t even truly form chords, let alone establish a tonal center.

That’s where Morgan Henderson’s genius comes back into play. He hammered on A for the first verse and the first chorus, and he brings it back just as we start the outro.

He starts the last chorus by false-starting on A, letting us know that’s the key and where home is. After doing a measure on and a measure off twice, he plows through the four-bar phrase five times, really driving home: this is A minor (2:34 to 3:25).

But then Henderson ups the ante even further. For nearly two minutes, he avoids playing in four-bar phrases, changing the chord progression each time it comes up, starting with one three-note phrase (C, E, and F) before switching to three repeats of a seven-note phrase (C, E, F, C, C, E, F).

Essentially, he plays three diatonic notes that each provide the framework for a multitude of chord progressions, avoiding any true resolution by never playing an A. The chord progressions formed rarely repeat, but the tension only builds.

Try listening while watching the sheet music to hear exactly how Henderson turns a simple idea — play fewer notes, stay in the pocket — into a mind-blowing set of unpredictable harmonies (3:25 to 4:25). 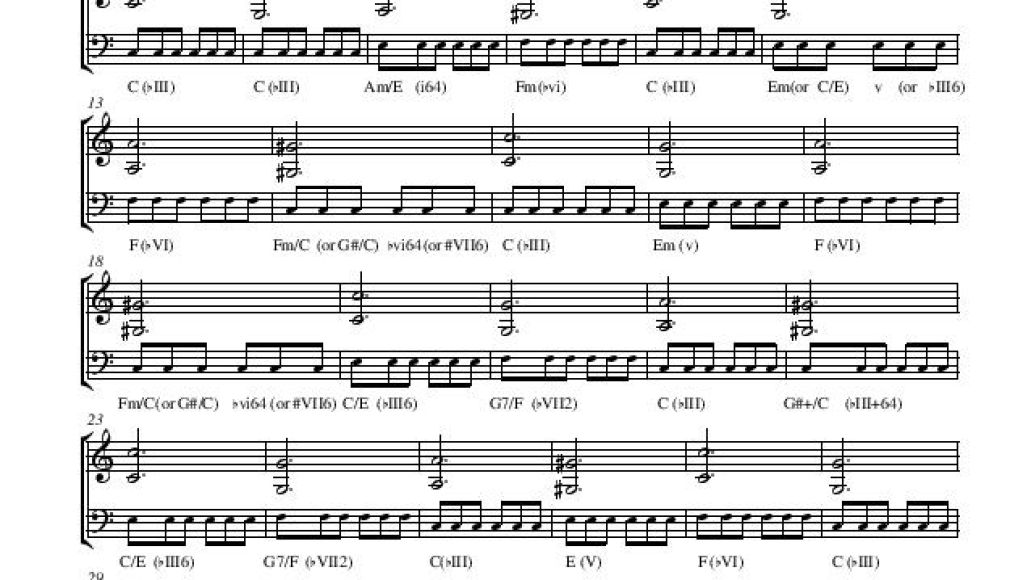 After all these off-kilter harmonies, he outlines the chord progression and keeps it simple, playing a bassline of C, C, E, F … but still never plays A. The song never resolves.

Though the lyrics are poetic enough to allow for multiple interpretations — it could be about a breakup (“how many chords till this song vomits out real love?”), the fallacy of man (“laid out groveling like a field of wounded soldiers”), or something else entirely (“my heart is a black haunted loom weaving jackets for children who’ll never be born”) — it is undeniably about one thing: shame. The last listed lyrics in the booklet to Burn, Piano Island, Burn are “This is our shame” from “The Shame”, echoing somewhere in the background of the mess at the end of this song.

That shame builds over drum rolls, dissonant grooves, a metallic guitar line, and a melody more in line with Shostakovich than alternative rock.

And it never resolves.

Dan Bogosian is a writer based in Brooklyn. He has a BA in the equivalent of Music Theory from Marywood University and has written for Bass Player, Drum! Magazine, and ultimate-guitar.com. You can find him on Twitter here.

The Blood Brothers: A Shameless Use of Tension