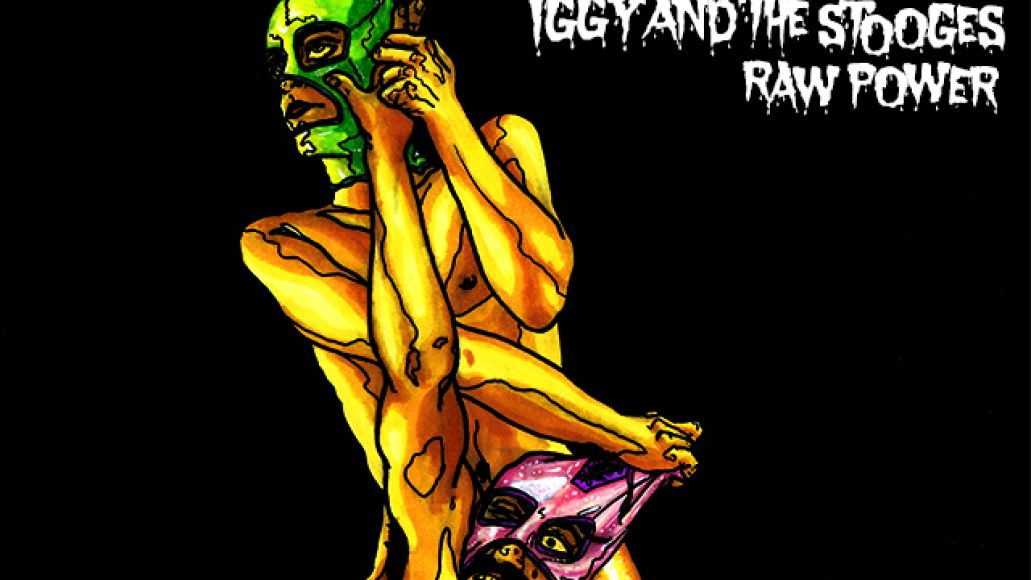 The Continuing Tales Of… is a new feature where we pay tribute to an album’s anniversary by asking writers to compose a short story inspired by each one of the songs. Last month we did The Postal Service’s Give Up. This installment is Iggy and The Stooges’ Raw Power, which turned 40 last month.

“Search and Destroy”
BY PHILLIP PANTUSO

See the sky. See the blue sky sundered by the contrail of an airplane. See the Hueys tilt toward high heaven, their blades thwacking the air, and see the yellow plumes of mustard gas festering the land. Hear the artillery whine overhead, see it arc toward some terrible end. Feel the dirt pelt the back of your neck, and think to yourself: God, doesn’t it feel good?

The reports you read back home about the war impose an order that does not exist here. Back in America, the war is a 32-point bold headline. It’s a montage of grainy footage, anonymous green men running around with god-knows-what in their hearts, but fear in their eyes. It’s set to head-splitting music, a world away from “Rock Around the Clock”. But it’s not really like that. What it’s really like is quiet, boring, repetitive, until it tries to kill you. There is no destiny, no narrative; the war takes what it can get.

You pass most of the war waiting for something to happen. The Big Fear accretes at the liminal edge of your attention, so that you are always conscious of danger, but never quite sure of where it is or when it will come. We take the edge off, with dope, with Dexedrine, with pictures of girls from back home, with jokes about how calming it would be if we just got it over with and blew ourselves up. I’ve known lurps who shove palmfuls of the Dex pills down their throats, just to cool themselves down enough to pretend to play their parts. The pills make your teeth feel hollow, your blood run too fast, and your breath smell like you’ve been chewing meat. The dope, however, slows everything down just right; it scrapes out the insides of your veins, it soothes your nerves. It brings this dimensionless thing down to size.

Our battalion had been deployed as part of a large-scale effort in Tay Ninh Province, an effort to relieve the pressure on Saigon and the surrounding area, to the Cambodian border. When we lied down to sleep the night before deployment, the Big Fear returned, like a jackal with glowing eyes on its nightly rounds. The stars pinwheeled overhead. How many of them to each one of us?

The next morning, D-Day, the battalions gathered in a great disordered mess. Someone joked, “Who’s ready to enter the great Beyond?” The Beyond is what we call the jungle. The jungle is oppressive and disorienting. It makes you feel like you’re on the verge of blacking out. You feel each of the sweltering seconds as they pass, with a low-grade, insidious terror that something is coming for you from just outside your periphery. You can never see everything. Once you’ve been in the shit, some part of you never really comes back. That’s why they call it Beyond.

A Marine on the flight muttered nonsense the whole way over. He had one of those faces I’d seen a thousand times, not a flicker of youth in his eyes, the pallor sucked from his cheeks and lips. He looked like he’d been dead for weeks and injected with some animating fluid for the purposes of this mission. His name was Williamson. This was his third tour.

“I couldn’t hack it back home,” he said, just like that.

He shrugged. Last year he’d survived an ambush on his platoon; he played dead as the VC bullets whistled by. The entire platoon went down. The blood had dried in his hair before he felt safe to get up. When that tour was over, he went home, and found himself pointing his father’s hunting rifle at the house cat, tracking it across the living room, until the only feeling he was aware of was a heaviness in his pointer finger. That’s when he would’ve pulled the trigger, back in Vietnam.

“I figured I better get back in the shit,” he said. “That’s where I’m useful.”

We landed and the platoons fanned out in an arc. The next few days were spent hacking through the forest, thinning the bamboo canopy, seeding enemy trails with Claymore mines. It was impossible to measure progress. Once, the point man fell into a trap that had been covered with leaves. He lay at the bottom of a pit 10 feet deep, with his leg bent the wrong way, biting his knuckles until the skin broke so as not to scream out in pain.

“Vietnam, man. Shit!” said Williamson, shaking his head. He offered me some dope, and I took it.

On the fourth day, we began to take fire from the northeast, and soon we lost radio contact. The 2nd Platoon, having been aware of our position, moved to the northwest to cover our flank, but soon they were hit, too. Small arms fire, rifle grenades, rockets, 60-mm. mortar rounds, descending like a small weather system.

The world winked and I came to on my back, staring up at the blue sky through shadowed foliage. No one was around, and I didn’t know where I was. For some reason, my mind flashed back to Muskegon, Michigan, and the backyard of my parents’ house. I was nine or 10 years old, and I was lying in a furrow in the soft clay underneath the towering red oak tree, watching the clouds striate the sky above. It was early autumn and the leaves were twisting to the ground. Our dog had dug out the pit to keep cool in the summer. He’d run up to greet you at the backdoor with a muddy belly. We’d had to put him down a week earlier, because he had cancer. I wasn’t sure why I kept going out there, but something compelled me, and once I was there I didn’t think about it.

And then someone yelled, and the bamboo started shaking. My eyelids were hot and my muscles slow to respond. I heaved myself upward and started moving toward the sounds.

Iggy lumbered toward the door. Punks stood by it, markers of relative distance from the entrance. He counted as he got closer. One punk deep. Two punks deep. He was at the precipice. The door was missing, and judging from the gashes in the frame, had been for a while.

Beyond the ruined entryway, a sea of black rippled. A raw scent steamed off of them collectively and gave weight to the air. He saw stars as nearby piercings and studs swiveled to face him.

The mass of black-clad flesh mostly ignored him. He penetrated its folds, his own shirtless body giving contrast to the crowd. He needed to find Matthew.

He saw the hesher in the kitchen, bent over, pumping a keg for a leggy girl with long, wavy black hair. Iggy walked up to him. “Dude.” Matt straightened up. He looked surprised, perhaps even intimidated, despite his above-average bulk.

“Hey, man. Glad you could make it. Like I said before, you’re welcome to stay here for the night,” Matt said quickly. Iggy’s shaggy head rose and lowered in succession, in approval. He was motionless for a second, merely planted there. His eyes followed a passed cup of beer, leaving Matt for the leggy girl, and relished moving up and down her. They settled on her own eyes, giant vulnerable reflecting pools just north of a deep red, slightly parted mouth.

Her veneer of innocence dropped. “Matt fucks like a 13-year-old. Will you fuck me instead?” He fell in love with her immediately.

Iggy and Matt locked eyes. Matt’s facial features floated away from each other in disgust, then contorted and thinned in rage. The big hesher looked like he was going to hit somebody, but wasn’t sure whom. Iggy’s mind was clogged with emotions. Desire, fear, and confidence all danced together. Logic wasn’t invited to the dance. The unnamed girl giggled and spilled some of her beer. After careful introspection, Iggy thrust a fist into Matt’s belly.

—
He slapped her again.

The corners of her eyes lifted, and her servile pupils rolled upwards. This was how he knew he was doing a good job. Her bottom lip offered itself to him, and he took it in his teeth.

Her folded legs swung around, heels digging into his back. She grabbed at his skin, nails digging in, and bit him in turn, much harder.  Her eyes shot right through him, echoing around his skull. He gripped and pulled, hair and limbs, each assertion drawing from her a moan.

Finally she came, squeezing, drawing blood. Her jaw snapped open. He smiled. “You like that, whore?” he growled.

They slowed and then stopped moving, parts cooling and solidifying. Their eyes were locked to each other’s. They were warm, a feeling like fire dancing off the skin. Breaths colliding, he started to close the distance between their mouths.

“Faggot,” she said and pushed his face away. He rolled onto his back, and her head rolled down to his chest. She splayed herself over his body, steaming mass on willing, steaming mass.

They didn’t say anything for a while. Then: “they’re gonna kick your ass when they find you here.” She giggled when she said this. He considered it. He had no response. He picked up a spliff from the ashtray and lit it, inhaling. Her black hair spread over his chest, her breasts and bent leg pinning him down. Her hand played with his chest hair, absent of thought or intention. He exhaled.

“I think,” he started, giving little indication that he was doing so at the moment. “I’m gonna get a drink.”

She grabbed his chest hair in her tight fingers. Her saucer eyes pleaded. “No. You stay right here.”

He didn’t really feel like moving anyway. He took another drag and threw a thought towards his situation. Her boyfriend was probably conscious again, or would be soon. Matt wasn’t going to be happy, or sober. Iggy could leave, right now. Tell this one that he has to go to the bathroom, walk over the concussed and unconscious bodies, straight out the empty doorway.

He exhaled, tapping the spliff and missing the ashtray. His other hand rose, penetrating her black hair and slowly caressing the scalp where it met her neck. He wasn’t ready to let this one go. He tried to assign his want any reason or justification and couldn’t. There was some logic-deflecting force field around his intentions for this girl. He figured that meant he loved her.

As the spliff burned, as her warm breath feathered his chest, as he lay there thinking about these things, he heard voices outside the door. They were urgent and inquisitive. Iggy knew he couldn’t stay for much longer.

Something smashed against the bedroom door. She raised her head off his chest, her hair covering most of her bothered face. “What the FUCK.”

He stubbed out the spliff on the night table. Thinking time was over. Doing time was now. He rotated his hand around her neck, grabbing her by the throat and pinning her to the bed. He leaned in and took his kiss.

The Continuing Tales Of... Iggy and The Stooges - Raw Power