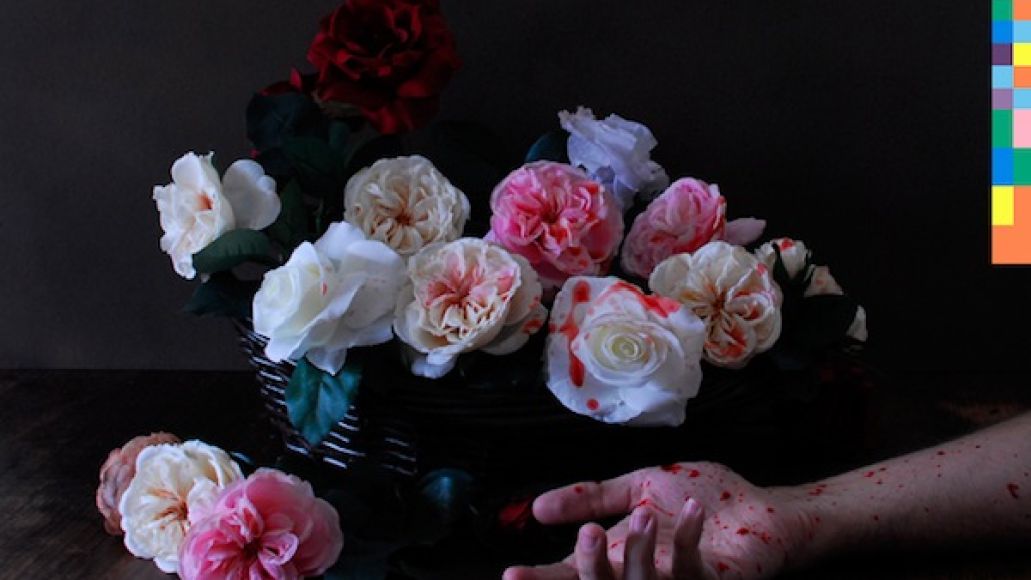 For the generation that wrote these stories, New Order was something that needed an introduction. For me it was my dad, who’d crank this ancient sounding dance music through the system of the family van. It had a certain air of mystery – legitimate, popular, and catchy sure – but consistently off-kilter. Power Corruption & Lies is a record that became more important as you grew with it, when “Age of Consent” stopped being about the bass and started being about the longing. —Luke Winkie

Click the arrow to continue to the first story…

“Age of Consent”
by JAMIESON COX

Tom leaned over the platform, peeking at the streetcar whose light was just rounding the bend into the station. “I don’t know, it’s really hard to describe — I guess it’s like I’m feeling way more physical, like, sexual, than emotional right know. Do you know what I mean?” He kicked a pebble, watched it skitter over and down into the track.

I stood up, grabbed a seat on the car, rolled my eyes. “Yeah, you said it earlier, I get it.” Tom had mentioned something very similar just a few hours earlier, tracing a finger idly down my chest as we laid on his couch listening to Washed Out. We had met a few weeks earlier via Grindr, that gateway to modern romance: his haircut was cooler than mine, angular and arty-looking, and he struck up a conversation by commenting on the Dirty Projectors T-shirt I was wearing in my profile picture. He studied urban planning at a school downtown, the major I pined for while stuck in engineering; he wrote indie pop songs in his spare time; his body was gymnastic, compact, and tightly wound. He was shorter than I was. I had already told myself several times that he was the first real boy I’d met, the first one who could turn the others into footnotes, laps on the track before a race.

We rolled down the track together, bound for a Kensington Market bar tucked above a second-rate tattoo parlor, the sort of place where they serve your beer in ancient plastic patio glasses and there are tiny mountains of melted wax on top of the bar and scattered mantles. The DJ was spinning typical homo party fare, clubby remixes of Top 40 hits and R&B diva vocal stems laid over thumping four-on-the-floors. I grabbed a drink out of one of those ancient glasses, waved to a few nearby friends, and made for the center of the dance floor with Tom, pulling him tight against me. He snuck into an open space after just a few songs and headed for the stairwell, saying something about fresh air.

Time acquires a certain malleability when you’re dancing, minutes and seconds compressing and stretching depending on the night and the beat. The songs I had with Tom raced by, over in a matter of seconds while I focused on the way our bodies fit together, sending signals and messages with varying levels of urgency. The minutes he spent outside each contained eons, libraries full of assumptions and projections and hypothetical scenarios. I took my own leave from the floor and found him outside, sitting on the curb and smoking a cigarette.

“I think you should just try to let go of it for now. Come back up, dance with me, have a drink. You don’t have to think about anything.”

“Yeah, just give me a second.”

He ground out the butt of his cigarette and stood up, adjusting his Blue Jays cap, and we moved back into the bar. Stepping into the bathroom while he grabbed a pair of drinks, I felt satisfied with myself: I had managed to capture Tom’s attention, even if just for the night, and his nascent waffling bullshit could be dealt with later, perhaps post-coitally. Coming out back onto the floor, I looked for the blue brim of his cap and found him talking to another guy, a tan twig with beautifully shaped eyebrows in a pink tank. Operating under the naive assumption that he had seen a friend, I began to swim through the dancing hordes, grinning widely.

And then slowly discrete pieces of the interaction began clicking into place, forming a disconcerting whole. A light touch on the arm, finger lingering on a muscled ridge; a devastatingly effective head tilt-lip bite combination move, something I recognized from my own time with Tom; the piece de resistance, phones swapped back and forth with newly keyed numbers and names. An awful vacuum occupies your brain and chest in the instant you learn you aren’t enough for someone. A friend standing nearby leaned into my somehow upright husk and spoke into my ear.

“That guy’s a jerk, it sucks. You have two choices now: you can say ‘fuck him’ and move on and have fun with us, or you can break that shit up and try to get an answer.”

I somehow put together enough neurons to move in the direction of the latter, stepping into the middle of their conversation.

“Look, I don’t know what the deal is here or what you’re doing or where you’re staying tonight, or whatever, but my bag’s at your place, and I really don’t want to get it in the morning, so I want to go get it now. And then you can do whatever you want.”

I grabbed his arm and pulled him down the stairs, hailing a cab and climbing in. We sped through five minutes’ worth of leafy residential streets before either of us said anything.

“So, um, are you alright?” I loosed a drawn-out sigh and rubbed my forehead.

“I’m just so disappointed. I’m disappointed, and I’m tired, and I thought you were going to be different and you aren’t.” I cracked the window, let in a little fresh air. “It’s just… this whole thing is bullshit and I don’t get it. I don’t understand why I’m not enough. We went out together! Why would you do that?”

“I didn’t think… that’s what I was talking about beforehand, at the station, about feeling more physical and stuff — I just thought we were going to do our own thing but, like, still hang out and do stuff.” We were pulled up outside of his midtown house. I moved to take out money for the cab; he brushed my hand away. “You might need that to get home.”

“Yeah, yeah. It’s clear to me you didn’t think.” I could feel heat rising off my skin, my temples throbbing in the cool air, the ends of my fingers shaking. “Can we go somewhere? I’m… I’m not done.”

The next half hour was an exorcism of every early demon I’d collected, a period of renewal like shedding layer upon layer of calloused skin. I was naive, lonely, horny, hurt; I yelled, cried, laughed with malice, whispered. Tom mostly sat there and took it. And when I told him that I had to stay the night, even if it was on his floor, because I couldn’t imagine anything more pitiful than going home alone in this state, I didn’t yet understand that the only decision that was truly more pitiful than that was the one I had just made. And when I slept with him that night and left the next morning and cried on the subway home, weeping into a soggy Subway sandwich, I still couldn’t quite figure out why, exactly, I had made the choices I had the night before.

Tom was educational in the same way all boys that fly foul are educational: he taught me something about myself. You can share interests with someone and experience mutual physical attraction, and there are still thousands of ways for it to go wrong. You will find points and values on which compromise is simply not an option. You might need to blow it up and watch it burn to reach something better. I’m still learning from Tom, too. We’re guided by the ghosts of everything we’ve ever done before, and one of them is him, and the tiny part of me that’s haunted by it isn’t leaving anytime soon.