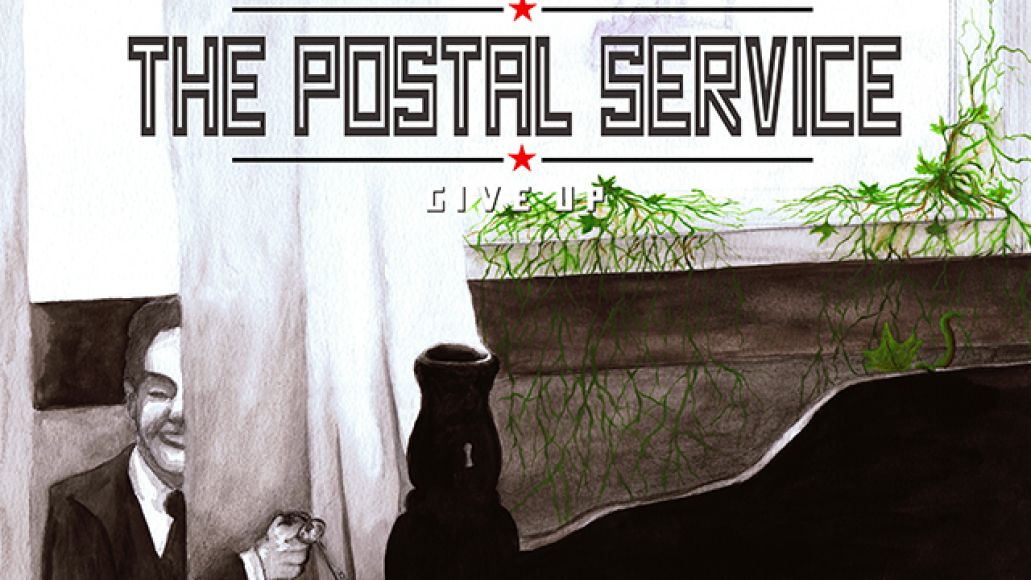 The Continuing Tales Of… is a new bi-monthly feature where we pay tribute to an album’s anniversary by asking writers to compose a short story inspired by each one of the songs. This installment is The Postal Service’s Give Up, which turns 10 this month.

It’s fitting we’re kicking off our new short story feature with an album like Give Up. There have undoubtedly been thousands of hasty narratives scribbled on 11th grade physics notes, blessed with working titles like “Recycled Air” and “Brand New Colony”. These songs have been internalized by an entire demographic — it was indie rock. It taught us how to think, how to feel, how to love. Strange to think that these daring, transparent emotions have had 10 years to mature, without losing any of its briskness. In lameness and in coolness, The Postal Service has never been insignificant, and asking our writers (including Kitty) to chide or celebrate reckless teenaged infatuation was a wonderful challenge.

Click the arrow below to continue on to our first story…

That is all the note said. Not signed, nor sealed. Just like hundreds of identical declarations before it I crumpled it up and threw it in the trash. I liked the crunch as it folded into a tight ball. I liked the anonymity of the paper as it joined the other refuse in the bin, packed away.

As I worked a cork out of a bottle of Cabernet Sauvignon, I thought how his handwriting looked more frantic, even with a few strokes. I slugged down the glass like a teenager, desperate to erase the note, and recalled where the ink had run from another night spent weeping. I kept thinking that after all this time, all we’d been through together, the last three tumultuous years of desperation and longing, that I should be completely disgusted by now. But I’m not. I just feel sorry for him. One glass finished already. This was going to be a long night.

I looked around my box-filled apartment, once a constant stream of friends and lovers, now compartmentalized in brown cardboard squares. God, I love this place. High ceilings, big windows that flooded it with light. I already miss my mismatched decor cramming the walls. My books filling the narrow, floor to ceiling shelf. How am I going to move all of those? I need a Kindle. Taking a seat on the bare floor I began to cry. I could still feel the paper pleading for my attention all the way from the trashcan.

It took a while rifling through boxes, but I located my emergency cigarettes. I’d smoked all through journalism school and my freelance career. In the earlier years, I remember a carton of Camel Blues showing up at my doorstep. He was always good about the details. I can’t consider myself a smoker anymore, but this stash was reserved for moments exactly like this. I unlocked the window and struggled to push it up as it screeched. Straddling the sill I inhaled, then pushed a cloud of smoke from my lungs over the streets of DC. I will miss this city.

Tomorrow I’d start my transition to a new life, away from this place where I’d become an adult, where my friends were. I was on a first-name basis with the cashiers at the store a few blocks down. The bar where I worked nights during leaner times was a mile away. That is where it all started.

I had worked there about a year the night he walked in. I knew immediately he wasn’t a regular, I knew the regulars. These guys were the blue-collar bunch, they ordered beers, not cocktails, and quizzed me over the Redskins. I even let Dan, a 63-year old HVAC tech, smoke inside toward closing time, but only because he reminded me so much of my dad and bitched about stepping into the cold to have a Pall Mall.

I wish I could say he slunk in or interrupted the flow of things ostensibly, but he didn’t. He just walked in.

It took me a bit to get to him at the bar. He took a corner stool and waited patiently as I attended to regulars.

I pointed to him hurriedly.

As I made the drink I studied him. Blond, brown eyes. His hair reminded me of Julian Assange, who I always thought had a fabulous coif, despite being creepy. I thought about telling him that, but wasn’t particularly talkative and I thought he might take it the wrong way. I gave him his drink and opened the tab. He was a good looking guy, and I figured he was meeting a girl there, but the hours passed as he nursed his drinks, blinking at nothing in particular. He only had two. He closed his tab with minutes to spare and walked out. He hadn’t said more than 10 words to me.

That was the meeting — nonchalant, forgettable. Now it gives me chills.

A few days later, the letters started to come. My boyfriend at the time found the first crammed through the mail slot, the simple folded message, “I love you.” He brought it to me when I was still naked in bed. We laughed about, speculating which of the boys at the bar it could be. We always figured that’s where it came from, because surely the writers I worked with would have been a bit more verbose. We joked about my “stalker,” laughing that we would hold stake-outs to catch him.

I shook my head as I thought about it. My carelessness made me sick. It all unwound from there, the notes became more frequent, but always the same – “I love you.” Then packages, presents. Things that I actually wanted. This guy knew things about me. My favorite cigarettes, my favorite wine, a novel I’d been eyeing at the used book store. Each time I received another box, another slip of paper, I felt sick.

It’s strange how things erode you over time. I was afraid of everything. Countered by my joy of finally landing a staff position at a paper was the love of the solitude that freelance work allowed. I stopped going to happy hour with my friends, or even inviting them over. I quit my job at the bar and lived on Chinese delivery. I became so despondent that my boyfriend of two years ended things, clueless of how to handle the situation. The once loudmouthed life of the party was reduced to a cowering hermit, engineered by a puppet master that did nothing but give me gifts.

I flicked my cigarette into the street below and held out both of my middle fingers. “FUCK YOU!” I screamed at the empty block, as I lit another. Tomorrow this will be done, tomorrow I can start again. And tonight, I ruled my life again. I wasn’t afraid to sit in my open window. The promise of something else was tangible, I could taste it. Even if it was in Boston.

I smoked a second cigarette down to the filter and went to check that the door was locked for the second time. It was a tick I had developed since this ordeal had started. To assure myself it was locked, I undid the lock, the chain, the deadbolt, and opened and shut the door. But as I began to close it, something caught my eye. A brown paper box, and a hand-written note.

“Such Great Heights”
BY CAROLINE RAYNER

Do you remember calling me the night you left town? You asked if I’d started drinking, if I’d finished a bottle of wine yet, and I told you I was drinking mint tea and reading about life beneath Antarctic ice and thinking about ice inside the rings of Saturn.

I read the same sentence over and over and thought of the whirlpool galaxy tattoo on your shoulder.

You talked about Logan. You said that he was driving, that he was playing music you hated. Rap and space station disco, rewinding and skipping forward at the same time. You said you couldn’t wait to play the lame punk and metal you liked in middle school.

Are you still eating stale Cheerios?

Did you end up stopping for cigarettes?

You’re always almost out of cigarettes.

I like when you talk about chain smoking before shows and writing songs at the last minute. Songs about spiders or surgery or video games or acid. Songs you laugh about and Dan loves and Jesse hates and Logan sometimes forgets. Songs you all sing together, or yell together. Songs you play as fast as you can.

Remember the night you got high and played “Sister Ray” for an hour? In Logan’s basement before he got rid of the antique mirror and traffic cones and lava lamps? Jesse let me play his guitar, and Dan sang. You were wearing black jeans, and you’d just cut your hair into sharp angles that framed your face and fell across your eyes as you played bass.

I haven’t been sleeping. I’ve forgotten how to sleep. I’ve forgotten where to sleep. I tried piling pillows and towels and sweaters in the bathtub and sleeping there. I tried curling up in the argyle armchair on my fire escape. I tried lying on my couch under the puffy blanket you stole from a yard sale.

At four o’clock in the morning, I made chocolate chip pancakes.

I broke a salt shaker.

Do you remember driving through the mountains in the middle of the night? You took all the turns way too fast, and you told stories. About buying records and learning to like whiskey. You pulled over next to an abandoned gas station and spray-painted your name across the back wall. You spray-painted shooting stars and a shark, too.

I drove through the mountains by myself. During the day. I saw red flowers and a crumbling chimney and an old woman wearing a paisley dress and round glasses with turquoise frames and carrying a basket of apples.

You said that you’d been stealing Dan’s clothes. That you were wearing one of his T-shirts. A hot pink one with a ragged V-neck that he cut himself.

Did you take the black sweater I let you borrow? The one that’s too long on you?

You can keep it, if you want.

I bet you’re wearing a jean vest and red lipstick.

You might forget to call back. Sometimes you forget. Usually you forget. You’ll shoot whiskey and shotgun a beer and start an argument about Johnny Thunders and lose your cigarettes and bum one or two or three from someone you don’t know. Someone wearing a leather jacket. Someone skinny. Someone you’ll convince to get a neon blue comet tattooed on his wrist.

I haven’t eaten yet.

The Continuing Tales Of... The Postal Service - Give Up