The Day Room is a column by Philip Cosores that features stories from the music industry that shine a light and brighten the corners.

Near the end of talking to Brooklyn four-piece So So Glos, I ask them about their aspirations.

“To take over the world,” says Ryan Levine, the band’s guitarist and most physically imposing presence. He looks me in the eye when he says this and shrugs it off with a laugh. “The aspiration has always been the same.”

How close the band is to this goal is relative. On this night, they have just finished opening their second and final date for Brand New, one of the hardest shows to get a ticket for that has ever played the Observatory in Santa Ana. Brand New has a strict “no press policy” for these concerts and I am the only journalist given access to the building, a privilege I am well aware of, though it is somewhat wasted on me, as I’ve never really warmed up to Brand New, and by the end if the night, I’ve determined it’s music you had to be there for and not sensical even through a decade of reflection.

So So’s other guitarist, Matt Elkin, is the only member of the So So Glos that isn’t family by blood or marriage, and he makes it know he feels the same way about Brand New, recalling it as a band he used to drop his little sister off to see at concerts. Elkin seems to come from a similar musical background as I, and we talk about Modest Mouse as something that captured our attention during the Brand New heyday.

Elkin and I smoke a couple cigarettes and mostly just talk about music. He explains to me that his foundation isn’t the same as Brand New or likely their fans, and that the pop-punk his group gets likened to isn’t an influence at all.

“I never listened to Rancid,” he notes, but being a fan of the Clash is a common ancestor, and means the So So Glos have some sonic brethren whose sound is all that is shared. Elkin also speaks of going on tour with Conor Oberst’s Desaparecidos and how the revered songwriter embraced the band through both encouragement and collaboration. He doesn’t say so, but Oberst’s side-gig could be a better blueprint to finding an audience than the ’90s pop-punk for which they draw comparisons from. Still, the thought creeps in that maybe songs about partying and songs that are, as the band describes, “social critiques” don’t marry without some resistance. But really, what marriage is perfect? 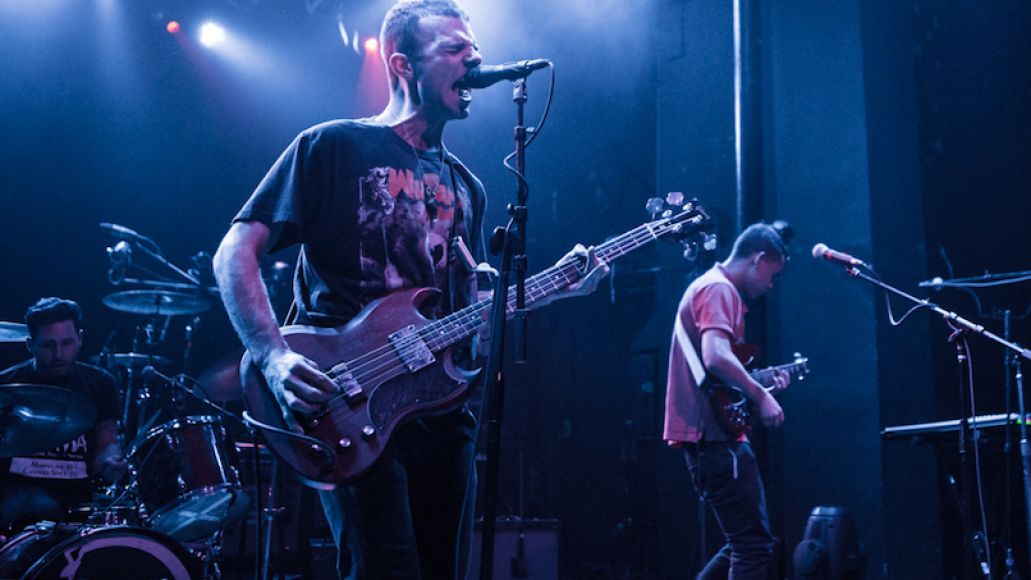 Elkin becomes my unofficial liaison to the group, and when all are present, he speaks directly to me on behalf of them all when simple logistics or requests need to be made. Most notably, he’s the one that makes it clear when it is time for me to leave.

Playing to a thousand people isn’t an every day occurrence for So So Glos, but they also don’t necessarily think of it as a privilege. After their opening set I speak to singer Alex Levine while he packs up instruments, telling him that the crowd seemed receptive, that I thought it might have been a good pairing for his band.

“Well, at least one of us does,” Alex replies, smiling to let me know he’s not being a complete dick, but his point is made. Playing to a thousand people is not necessarily a victory if they aren’t the right thousand people. A couple days later they would be playing an all-ages space called Thee Men’s Warehouse in Anaheim, named for its proximity to the suit brokers, and the room would likely be full of a hundred sweaty teenagers. The thought has to occur that his band’s album Blowout is listed among the 50 best of the year by Rolling Stone and Consequence of Sound, but are still firmly under the radar. Plus, accolades like that don’t really shape the way that So So Glos are presented by the media, the way that punk-influenced music is often regarded below other forms of music as an art based on the musician’s often lack of technical ability. Few bands can break out in such a way as Japandroids recently did or others do in time. Because non-throwback punk-influenced music essentially seeks out the youth in both its artists and fans, it isn’t until the next generation that the music holds much weight.

“We always get labeled pop-punk,” Ryan notes when the band is gathered in their dressing room, “and it makes sense because we are poppy and our roots are in punk.”

“You think of ’90s mall punk,” Alex says. “But, most of our songs start with someone on acoustic guitar trying to write a Beatles song or something. We never learned our instruments technically well and decided we wanted to be a punk band. It’s just the ideas for songs came before the technical ability to play them. We’ve been in this band since we were little kids. I guess that’s where punk comes from, the punk sound, just learning how to play. And we listened to a lot of pop music along the way. We’ve got the Darlene Love sample on “Xanax”.  We’ve got the Motown stuff, but people don’t see that.” 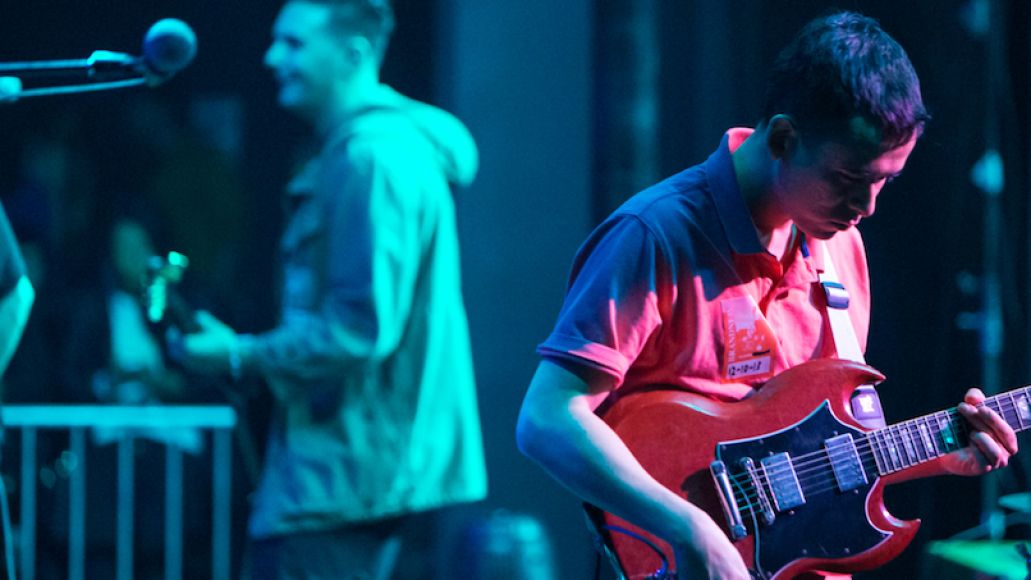 Blowout opens with “Son of an American”, which unsurprisingly is not a pro-American anthem. Unsurprising to me, that is. Reactions to the song indicate otherwise.

“When you write a song like that, you know that some people are going to take it the wrong way,” Alex says. “The lyrics are ‘Gimme thin girl, thin TV, ice watch, ice coffee, malt liquor, malt ice cream… because I’m the son of an American.’ Out there I wonder how many people take that serious? Maybe I’m not giving people enough credit, and that’s the risk of writing a really sarcastic song. I think any American anthem is half-sarcastic and half-sincere. Critiques are what America is all about.”

I wonder out loud how anybody writes a song without any self-awareness, or at least considering the way America is seen by non-Americans?

“It happens all the time,” Alex replies.

“A lot of times, it seems like we’re too punk for pop and too pop for the punks and too pop for the art scene,” Ryan notes, and the band’s career makes perfect sense in this light. “When we started the band in 2006, we were playing in Lower-Eastside dive bars and it was all Strokes-wanna-be, really hip fashionista-type bands, and we were really not welcome in that scene. I was 19 and throwing bottles against the wall and getting kicked out of those clubs. But then when we discovered the all-ages movement, and we helped found those venues a year later, it was sort of like a haven.”

The So So Glos would go on to found a couple of spaces, and are currently running Shea Stadium in Brooklyn, and though it is inherently limiting in its appeal and reach, the band at least can be assured that the people who show up there understand who they are and where they are coming from. It’s the rest of their potential listeners that need to resist the compartmentalizing of bands, that music deserves to be considered on the terms it sets up. The So So Glos are a rare case where their vision of themselves is probably pretty close to where a critic would place them.

“I want our music to be clear,” Alex says, and seems to mean both literally and figuratively. “I don’t want it to be lo-fi. I want it to be heard. I want the lyrics to be heard because I want them to be audible. But if we don’t hide behind the reverb or wear the lo-fi mask, all of a sudden we’re not cool because we’re not lo-fi. But people that listen to our music for pop, they think we’re just a lo-fi garage rock band.” 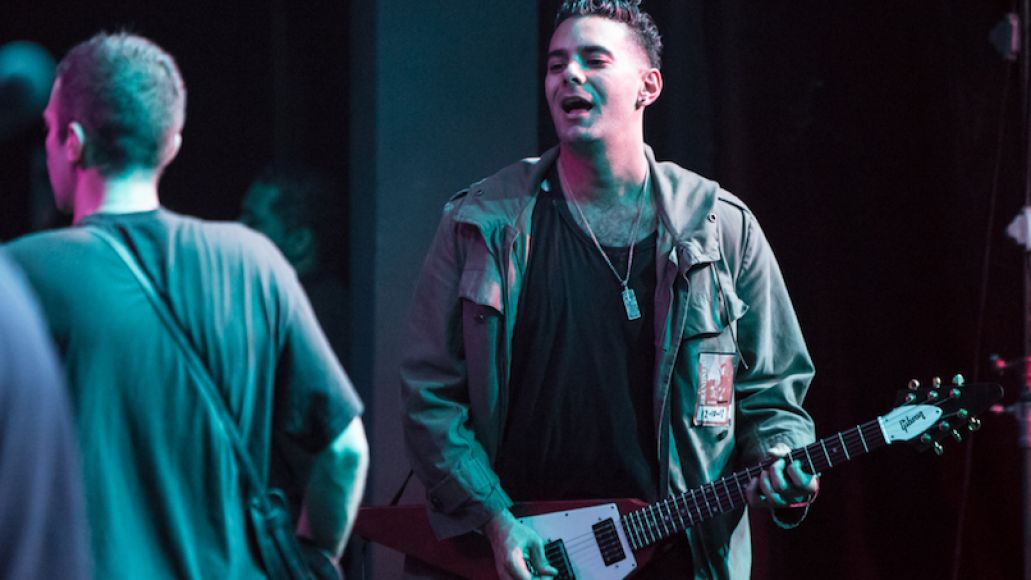 Somehow, our conversation concludes with the band showing distrust, and somewhere I had said something that made them question my intentions for the story, with Elkin reminding me that they could be reached by phone should I need more. I am on guard when he mentions that the band likes to keep things positive while shaking my hand. Classic films have taught me that subtext is vaguely threatening when it is heard through a Brooklyn accent.

Drummer Zach Staggers, who said little from his relaxed spot on a couch, mostly just smiling warmly and seeming generally agreeable to everything said, did offer one summary to why the band may have seemed wary toward me. “People want a story,” he noted, “they don’t want to hear the music.”

When your life is geared towards making music and not necessarily being a story, it is easy to empathize with any skepticism toward writers. The band speaks honestly about Pitchfork’s place anointing the fashionable few and is well aware how few people are actually responsible for telling so many about bands. Even outside that world, fans must question if these tastemakers are even the kind of people that you’d want to spend an evening with, much less take their impression of what music is important, or cool, or even good.

After watching Brand New for a bit, I head to the merch stand, and decide to buy a So So Glos vinyl and a t-shirt, making my visit worthwhile for the band at least in a small financial way. The area was unmanned, though, and I wait a minute until Alex and Ryan walk around a corner and behind the merch stand. Alex is grateful and if there was tension at the end of the interview, it is lifted.

Among their items for sale is a comic book series. Alex explains a bit about the books, showing me a title called “The So So Glos Take Down the Internet,” and he is amused and unapologetic over the obvious implications. 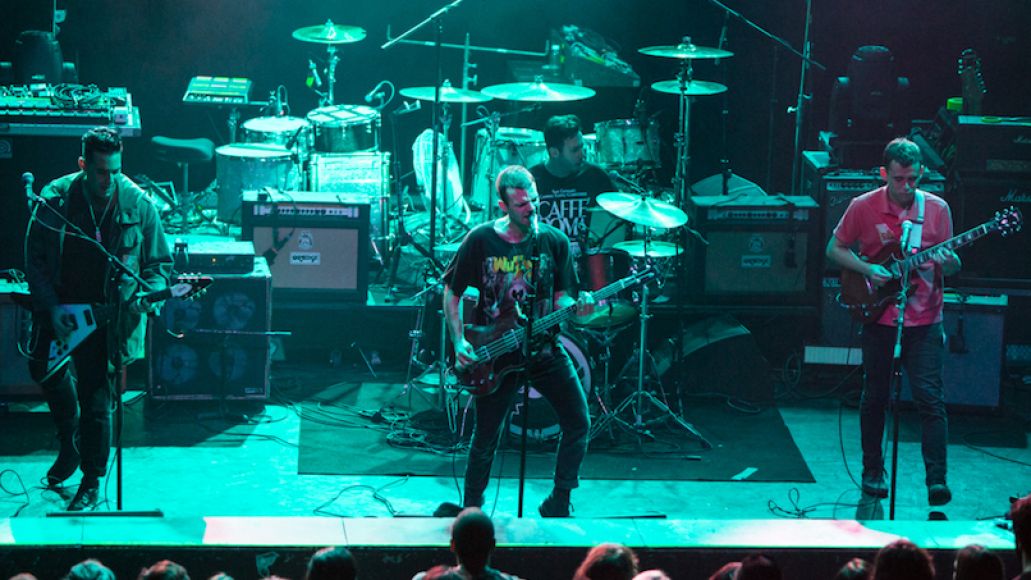 The band has never needed people like me to tell others to hear their music, or to explain why their show is enjoyable, or to place their work in a greater context. A spare quote tells me that they had made their decision long ago, possibly as children, what they are in this for, and how they want to get along in the world. “If you don’t feel accepted into a scene, make your own.” Is there any greater threat to the system than a band that doesn’t need it? It’s an idea that is hard not to take seriously. Call it pop-punktimism, or something.

Philip Cosores is Director of Aux.Out. and a  freelance writer and photographer working in Orange County and L.A. He contributes to The Orange County Register, Paste Magazine, Vice/Noisey, MySpace, Stereogum, Pigeons & Planes and many others. Follow him on Twitter.

PREVIOUSLY ON THE DAY ROOM: Charli XCX and Pop as Art

The Day Room: So So Glos and Pop-Punktimism