The summer before I moved from Chicago to West Virginia, I worked as a dishwasher and busboy at Bob Evan’s. I was fine with the job itself, but really, some of my co-workers were some high-grade assholes. But I put up with it, because hey, I needed that money. As I worked, I kept looking forward, spending a portion of every paycheck on a concert that would take place that fall in Chicago.

I grew up in a town where live music, let alone good live music, was scarce. So when that first paycheck came in from Bob Evan’s, I went online to Ticketmaster and spent it on a nosebleed seat to see The Who. Actually, I bought that ticket solely on remembering them as a big initial influence on the Ramones and obviously, watching clips of The Who as a high schooler was fun. The animalistic, wide-eyed, cartoonish performances by Keith Moon– any teenager’s going to fall for that sort of thing. They never disappointed on my copy of The Ultimate Collection, either. (Note: Although I bought it in middle school, there is no reasonable excuse for owning only a Greatest Hits Who album. Even Meaty Beaty Big and Bouncy or The Kids Are Alright soundtrack. I later got the essential albums.)

And honestly, that show was more fun than any of you reading would probably expect a 2006 Who concert to be. Yes, I was at the United Center by myself with an awful seat. No, Entwistle and Moon weren’t there. Yes, Roger Daltrey had to walk offstage for some nondescript old guy breathing problem. But whatever, they put on a great stadium show– Townshend could still windmill, Daltrey could still whip a mic around, and they could perform. There was an inkling of how they could have inspired early punk bands through showmanship and volume alone.

But after blowing all my Bob Evan’s Farm Fresh Family Eatery money on reunion shows and concerts by well-documented blog bands, I started looking into what “Chicago’s music scene” was like. That’s actually genuinely how I looked at it: “Chicago’s music scene.” I may have even said that phrase out loud a few times. I think part of me thought that Wilco, Andrew Bird, and Tortoise were all part of this nebulous “scene,” hung out together, etc. So thank God I found a true Chicago sound– and thank God it was garage punk.

I’m not sure exactly when I found trash in Chicago. It might’ve been when I bought the HoZac Hookup Klub version of White Mystery’s “Powerglove” at Permanent Records. It may have been hearing some local band open for Times New Viking at a Permanent Records in-store. (Permanent Records had a lot of pull with me in those first couple years.) But either way, Chicago was an incredible city to be while exploring all the DIY garage punk. It’s the home of too many great garage punks and curators: Chic-A-Go-Go, CoCoComa, Permanent Records, Trouble In Mind, HoZac, Bitchpork Festival, the Smith Westerns, Acid Marshmallow, and several bars that would frequently host people like Jay Reatard, Ty Segall, and King Khan. 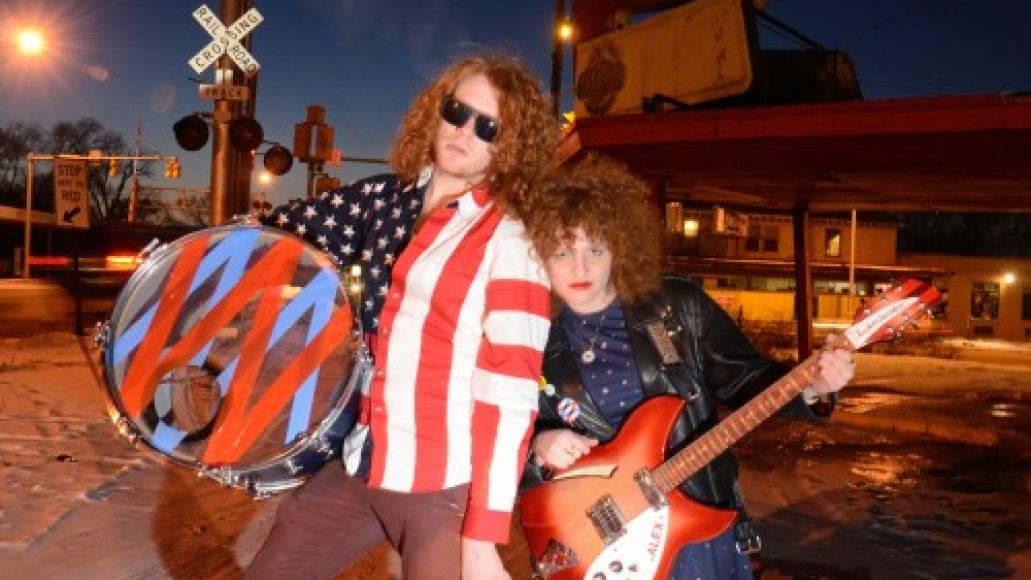 But White Mystery– that’s some grade-A trash. Helmed by red afro-clad brother and sister duo Alex and Francis White, it’s a band that does feedback and energy quite well. Their first two albums, White Mystery and Blood & Venom, both feature some well-executed, caveman stomping rock’n’roll. And their new single “People Power”, which is out on April 20th (rejoice ye stoner garage lovers), doesn’t disappoint. “Girl power, boy power, people power.” It’s got this Sly Stone optimism-via-muscle, and Alex’s voice finds a gruff bluesy edge, especially when compared to her belting on 2010’s White Mystery. It’s further proof that White Mystery is not only one of Chicago’s hardest working bands right now– they’re also one of the ballsiest and most entertaining.

Again, I found that band through HoZac, which is a record label that will not stop releasing great stuff (home of Dum Dum Girls, Smith Westerns, Fungi Girls, Super Wild Horses, Mickey, Wizzard Sleeve, Reading Rainbow, K-Holes, Wax Idols, so many others). Last month, they threw out another killer album– the debut LP by Chicago stalwarts Radar Eyes. 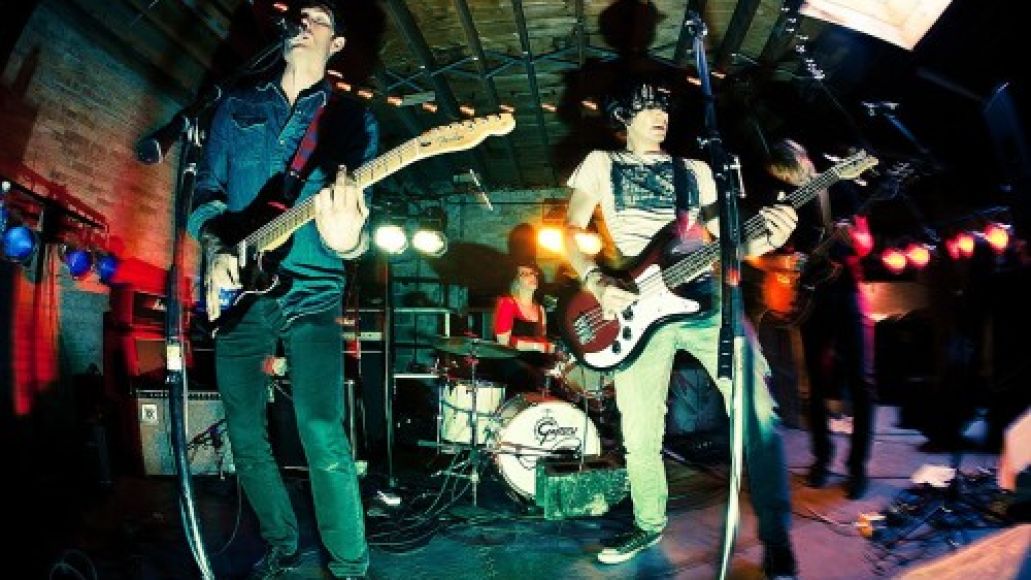 Really, that band primarily belongs in this column because they’re trash by association– they’re on HoZac, guitarist and singer Anthony Cozzi is also a member of CoCoComa (currently on an indefinite hiatus), and they’ve opened for several garage punks. They’re not exactly garage, and it would be short-sighted to call them punk. Their self-titled album, which came out last month on HoZac, is front to back consistent and entertaining, but it owes less to GG Allin and more to Brian Eno’s Here Come the Warm Jets and The Jesus & Mary Chain. But Radar Eyes are a hook-machine, slathered in feedback, and offers these gorgeous moments, like those buoying synths in “I Am”. The album stand-out, by a mile, is “Miracle”, which is an easy “song of the year” contender for me at this point. (It was released on a 7” last year, but whatever, it’s grandfathered in with this album.)

Another band I kept seeing on the bill for various shows in Chicago was Outer Minds. Their debut self-titled LP is out today, and while Radar Eyes find influence in comparatively subdued material like early Eno, Outer Minds point back to the era of raucous garage exploration– to artists like ? and The Mysterians or The Animals. Their Nuggets-driven guitar lines, harmonies, and organ are an absolute time capsule, and what a satisfying capsule it is. They’re example three of three (in this column) of Chicago bands that have a firm hand on hooks, and they do it in this ecstatic, choogling, psychedelic way that would make Sam the Sham proud. 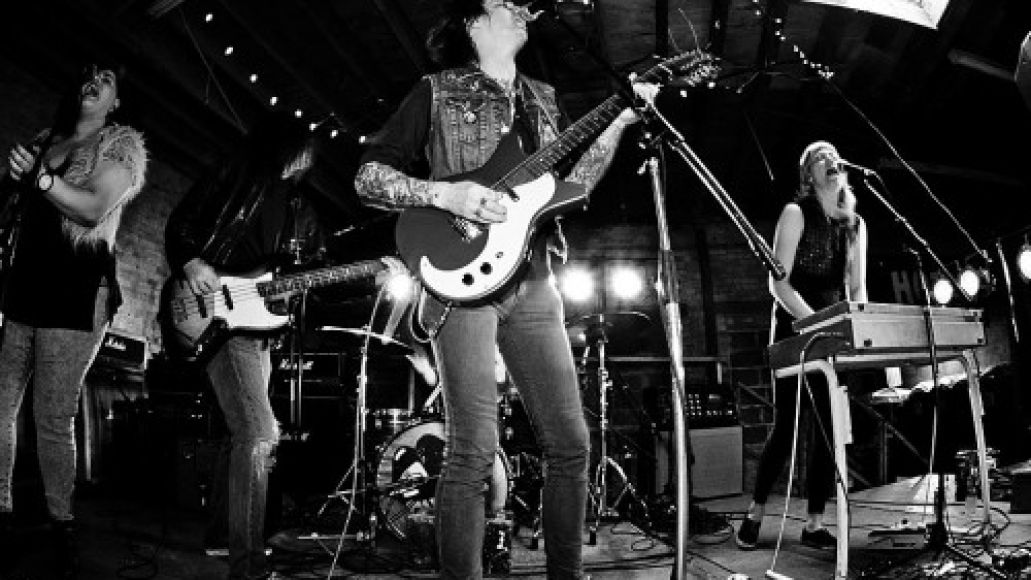 One last thing before we go– two members of Outer Minds were also members of Lover!. A couple years after moving to Chicago, before I’d really immersed myself in the city’s trashy offerings, I found a copy of Lover!’s single “Man in the Woods” at Reckless Records in the South Loop. I bought it for the army via comic books artwork, but it didn’t come off repeat. Rich Crook (of the Lost Sounds and the Reatards), fronted that band, and some of their songs were power-pop classics. Apparently, Lover! is no more as of this year. So this Chicago-centric trash column is in memoriam of Lover!, a band that lived in Chicago for its final years. Even in the midst of their more country-leaning stuff, they always cranked out some serious jams. It makes me wish I’d known about that band, or anything close to that band, really, before I blew all that dishwashing money on the Daltrey/Townshend cheap seats.

Evan Minsker blogs, tweets, and even while he loves his hometown of Ann Arbor and his birthplace of Huntington, WV, he will always love that sweet Chicago trash.