The Saturday night after the Fourth of July, I saw a listing for something called Mosquitofest in Chelsea, MI, which was being headlined by one of Detroit’s finest trash rock bands, Timmy’s Organism. Their latest record on In the Red, Raw Sewage Roq, was in heavy rotation for me, so I drove a few miles past the Jiffy Mix factory and into the woods. I didn’t know what to expect, but I sure as hell wasn’t expecting what I found: A stage surrounded by tiki torches, an empty swimming pool occupied by a hammock and mermaid decals, a cover band playing Neil Young’s “Powderfinger” and Doors songs, a folk band, a bunch of people camping, a game show, fish tacos, an audience that included an elderly couple who I only heard referred to as “grandma and grandpa,” and a small house that, while extremely cool, was accurately described to me as “Greg Brady’s pad after he moved out.”

It’s not a place you imagine seeing Timmy Vulgar, who you can find most readily scowling and belting out songs in Timmy’s Organism and his other band, Human Eye. It probably doesn’t help that the only times I’ve ever seen Hamtramck, Michigan’s rock’n’roll hero in person have been at bars for shows, either his or other people’s, so maybe it’s unfair to peg his visual habitat. But it was still surreal to see him throwing wood on a bonfire and watching the local sanitation department’s enormous fireworks display just above the Chelsea treeline.

It was a muggy night, and with the fireworks as a backdrop, the band recounted some memorable Independence Days. Bassist Jeff Giant talked about his dad throwing an explosive into a mailbox, completely obliterating it. Timmy’s memory took place right there in Chelsea when he was 13.

“Probably stealing booze from my aunts and uncles– just a couple wine coolers,” he said. “Then we went in this shed, and there were some kids that were there, girls our age. We turned off all the lights and we were lighting our farts, and those were our fireworks.”

It’s the sort of crass, funny story that would find a nice home on a Timmy’s Organism record. He continued:

“Then I got scared because my cousin went skinny dippin’ with this girl– I don’t even know if he was past puberty yet– but there was a lightning storm and I thought he was gonna get electrocuted. He kept telling me to come in the water and stuff, and I was scared.”

And that was the tone of our conversation. He’d go from his laughing, barking, wide-eyed, caveman-esque stage persona to having these quick, honest moments. But any hint of vulnerability was thrown aside when the conversation turned to Raw Sewage Roq, which Timmy described as “dirty, rotten, ugly, disgusting, wild, gross, smelly, stinky rock’n’roll.” Drummer Colin Sick said, “It’s what we do.” 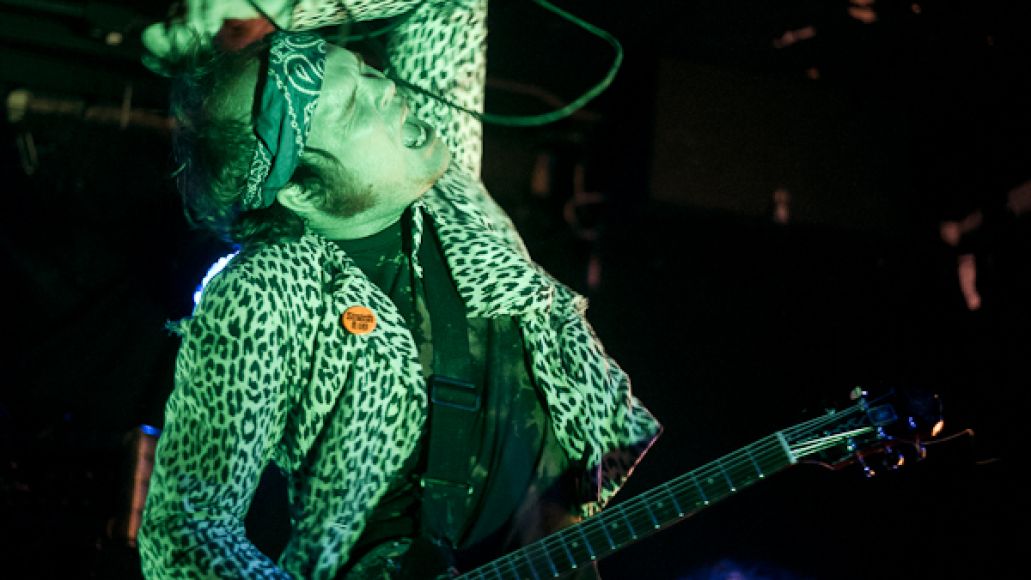 When I asked who else could fall under the genre title “raw sewage roq,” Timmy quickly answered, “Nobody else. We’re the only ones that do it. [laughs] We invented it!” But naturally, raw sewage roq doesn’t live in a vacuum, so we talked about some of their favorite trashy rock’n’roll: the Rolling Stones, Roxy Music’s “Re-Make/Re-Model”, Black Flag, the Misfits, glam rock, G.G. Allin’s early stuff, Ramones’ Ramones, the Stooges, the Freeze’s Land of the Lost, old garage punk from the ‘90s, New Bomb Turks, the Makers, the Drags, Berlin Brats, the Heartbreakers, the Pagans, the Electric Eels, Guitar Wolf, Ty Segall, John Wesley Coleman III, Ariel Pink, and “every Detroit local band right now”.

You can hear shreds of some of those bands in Raw Sewage Roq, but mainly you hear Timmy, Colin, and Neil churning out songs with great riffs and ridiculous lyrics. “Cats on the Moon” has them belting “WELCOME EVERYBODY TO THE U.S.A” after talking about an Elvis sighting. “Unhook My Leash” is appropriately unhinged and snarling. But the crown jewel of the album might be “Bouncing Boobies”, anchored by a muscular guitar riff and a barroom piano. In true “dirty rotten ugly” fashion, the song is about a girl with, get this, bouncing boobies. (The chorus, which Timmy said was penned by Colin: “Titty twist & shout,/ Let it all hang out.”) He takes her to the movies. She dances to the Flaming Groovies. The subject matter is on some “cool but sleazy and weird uncle” shit, but in the realm of trash rock, that song rules.

Raw Sewage Roq is a party album, and actually, maybe a great Fourth of July album — it’s thuggish rock’n’roll, it’s all about partying, and what better soundtrack is there for drinking and lighting stuff on fire? At the mention of it being a party record, we talked about other potential situations it could soundtrack. Timmy shrugged off the question, saying, “maybe chicks with natural boobies having a rumble with chicks with fake boobies.” Jeff said a night out in Hamtramck, MI (“You go to the bar, then you meet up with some people, then you go to another bar, then you go to another bar”). But Colin’s answer resonated for some reason: “When you gotta go to the mall and you’ve got to remind yourself that you’re still a scumfuck. All these normal people are around you, and you’ve got Raw Sewage Roq in your head. It makes you feel good.”

I tested that out a week later when I had to go to the mall. Sure enough, nothing takes the sting off the smell of a nearby Hollister like blasting some scummy, raunchy rock’n’roll in a pair of half-broken earbuds. God bless America. God bless Raw Sewage Roq.

Evan Minsker works for Pitchfork, blogs, and tweets. He is unsure when his next trip to the mall will be.