Dave Foley, it shouldn’t be surprising, is funny even in the context of an interview. The comedy veteran has enjoyed leading roles across a number of projects over the years, but his breakout work definitely came as a member of The Kids in the Hall, the iconic Canadian troupe he founded alongside Kevin MacDonald, Bruce McCulloch, Mark McKinney, and Scott Thompson.

The Kids in the Hall has existed in various forms, most notably as a five-season sketch comedy series, and in the years since the show’s end the men have reunited semi-regularly to collaborate on other projects or perform together live. Now, they’re reunited for eight new episodes of hilarity, both drawing on the past to some degree, while also showcasing no shortage of laugh-out-loud original ideas.

In this interview, which you can either watch above or read below, transcribed and edited for clarity, Foley tells Consequence what led to the Kids making their return on Amazon Prime Video. He also breaks down why the new episodes feature a more cinematic look, the origins of the star-driven “Friends of Kids In the Hall” segments, why the show is now pretty upfront about being Canadian, and how he feels about the show’s continued use of male performers dressed as women. Spoiler alert: His answer to that last question includes mention of both Plato and cyborgs.

I want to start off just by asking about the process of coming back for these episodes. How long ago were those conversations happening and what was it like to actually get back on set?

Well, in 2018, I started bugging Broadway Video, reminding them that 2019 was gonna be our 30th anniversary, and lying to them — I said, oh, all the Kids are interested in doing something. [But] I hadn’t talked to anybody. [Laughs]

So then Broadway Video started to get interested, and I started reaching out to the rest of the Kids in the Hall and saying, come on, let’s do something. We didn’t really know what it would be when we first started talking, and it gradually came around to the idea of doing a new series of sketch shows largely inspired by the fact that we went on one of our live tours.

We had done a tour of entirely new material which is, you know, commercial suicide. It’d be like, you know, the Rolling Stones just touring their new album. But we decided that was what we were going to do. So we did a whole tour of just nothing but brand new material, and then we did a tour after that was half new material and half old stuff. We realized we still had sketch ideas, and we had written some sketches that we thought would be really fun to film and then thought, well, let’s see if we can get someone to pay us to write a bunch of other stuff.

And so Prime Video eventually agreed to give us money — because they had to get rid of some. They were having an unhealthy congestion of money. It was almost like a blockage of the arteries. That’s why [Amazon founder Jeff Bezos] builds the rockets. It’s not that he’s interested in space. It’s just, if they don’t get rid of money, they’ll eventually just suffocate.

Yeah, no, you can’t have that kind of money just lying around. It’s very dangerous.

So we relieved some of their money congestion and wrote a bunch of new sketches and and it was fun. Which was nice.

Absolutely. In terms of the old versus new, there are definitely touches of classic sketches, classic characters, and so forth in the new season. What was the calibration process like, in terms of deciding what to hearken back to and what to leave behind?

I think the filter is always, “Is that a terrible idea or not?” And we’re always very quick to tell each other when we have terrible ideas. [Laughs] I mean, we’ve never accepted that there’s a mandate to do hit characters, ever. If you actually watch the old shows, there’s only like a handful of Head Crusher sketches over the course of five years. There’s maybe like one or two a season, tops. All of the supposed hit characters, there’s just a handful. Some of them, there’s only one [sketch]. People refer to my Bad Doctor or Sarcastic Guy being, you know, hit characters, but I only did ’em once.

The other interesting aspect of the season is that it feels much more cinematic. At what point in the conversation was the team like, let’s see what we can do in terms of really executing on a cinematic level?

Well, it’s an area we were moving towards in, I’d say, the last three seasons of the original series. We were moving more and more into the single-camera pieces and finding it harder to get ourselves excited about writing the stuff for the live studio audience. As much as we love performing for the live studio audience, in terms of writing we were more excited about the possibilities of single camera.

But in those days, single-camera financially meant 16-millimeter film. And obviously, in studio, we were recording onto analog tape, back in those days. Digital didn’t exist yet. So obviously the look of those old shows is limited by the technology of the day. And now, with the invention of digital cinema, it’s made it possible for a lot of people to compete with bigger budgets and look as good. So we took advantage of that, and yeah, it looks better, but mostly that’s just a product of advancing technology more than any advancing art on our end.

Were there any sketches where you felt like, eh, if we could have filmed this in front of a live audience, maybe it would’ve played in a different way or a better way?

I think there’s stuff. Definitely I think for Scott [Thompson], it was difficult to not have a live audience for things like Buddy Cole, because he thrives on that interaction with the audience in particular. 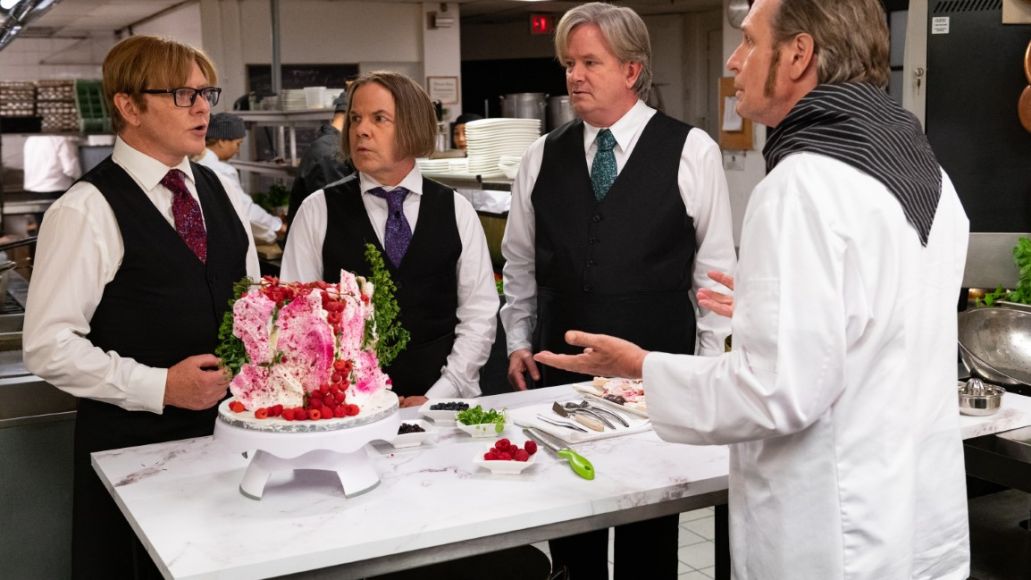 The Kids in the Hall (Prime Video)

As someone who has watched a lot of content shot in Canada, but not made to look Canadian necessarily, it was nice to like see something that’s shot in Toronto be very open about the fact that it was shot in Toronto. I’m wondering how deliberate was, the opportunity to be really Canadian?

Well, I guess for us, it’s not so much the opportunity — I guess we don’t think of it as being Canadian. Toronto was always kind of a part of the personality of the original show, and there was always the footage of the streets and people of Toronto in the bumpers between sketches. And so I guess for us it was more just staying true to the original feel of the show. We certainly never made any attempt to hide the fact that we were Canadian and making a show in Toronto. I mean, for god’s sake, we shot our show around the corner from Maple Leaf Gardens. How Canadian can you be?

But you’re right, I mean, being Canadian… SCTV had to always set their show in America. Even when they weren’t on in America, they set the show in America. There was always that attitude that Americans would only watch things that related directly to Americans. But then that changed. There was a period of time when suddenly, you know Australian stuff became hip and everyone wanted to watch Australian things. And now everyone’s watching like Danish shows, and Canada finally got its turn with shows like Schitt’s Creek.

I think that kind of opened the door for people to just go, oh yeah, it’s not necessarily boring to be Canadian and it’s not necessarily alienating. Americans can maybe bridge the cultural divide between our vastly different heritages. But yeah, it was always just a feeling in the old days that American xenophobia was an impenetrable wall to anything Canadian.

Well, I’m glad we got past it. I wanted to ask about the Fans of Kids in the Hall segments in the new season — you have some really fun cameos in these bits. [Note: The segments are actually called “Friends of Kids in the Hall,” as Foley politely corrects us below.] What was the motivation behind those segments, and why were you excited about including them?

Well, I think mostly just to massage our own egos, and to boast about how many famous people we know. That was the main goal. [Laughs] The idea of these pieces originally was just poking fun at our fan base, that we’ve grown to love over the last over 30 years, who are odd, weird people. So we had the idea for these little testimonials from viewers — I think we call it Friends of The Kids in the Hall, I think. It was probably originally fans, but our Canadian self-effacement made us change it to friends.

Then it was the idea of, well, as long as we’re doing these and these can easily be done remotely — this is during COVID — why don’t we ask some of our famous friends to do these bits, as opposed to us playing these characters. It was originally supposed to be that we would play those parts, but then we thought it might be more fun… Someone like Catherine O’Hara used to come to our club shows before we had a TV show. So it was lovely to have her show up.

Of course. Were you scripting those bits for them or were they coming up with their own ideas?

We were scripting them, but certainly leaving room for them to play around with them. I don’t want to give away who all the people are, but there’s a lot of people in there that are pretty talented and brought their own spin to things.

I feel like you can let Catherine O’Hara have a little leash.

Yeah, yeah, yeah. All of the people that came in, I mean, every single person who did one, was somebody that we had no right to expect to do it.

You may or may not be able to speak to this, but the show gets to sample Lil Nas X in one episode. And I was curious, is he a fan? Was that an easy ask to make?

I have no idea, because that was Scott’s piece. I don’t know if we had any trouble getting that or not. I never asked. I guess I was too busy with other things, but yeah, I wasn’t in that sketch, so I wasn’t involved with any of the shooting of it and I wasn’t involved in the post on it. So it wasn’t until I saw the thing finished that… I think it was just definitely somebody that Scott wanted to reach, you know — Scott just wanted to say to him, “I like what you’re doing. And I think what you’re doing is important.” And it’s true. He’s doing a lot to break down some barriers with the young folk.