First making his name as singer of the UK hardcore-punk band Gallows, Carter has established himself as one of rock’s most dynamic live performers, as evidenced by the Rattlesnakes’ unpredictable and high-energy shows.

With a big buzz surrounding the band following the release of their 2017 album, Modern Life Is Ruin, and a show-stealing performance at that year’s Rock on the Range festival in Ohio, Carter made the personal decision to step away from touring in the fall of 2017 to deal with mental-health issues.

Now back with the aforementioned new album, End of Suffering, Carter and Rattlesnakes guitarist Dean Richardson met up with Heavy Consequence at the Koneko Cat Cafe in New York City, where we were joined by a handful of cats as the pair discussed that decision to take a break a couple years ago, the new LP, and more.

“It was life and death,” Carter told us of his 2017 break from touring in the video interview above. “It’s as simple as that. I didn’t really have an option. … For me, it was a case of just trying to be kind to myself, in a way that the music industry doesn’t always allow.”

While in a cat cafe, we couldn’t let Carter go without talking about the band’s recent single, “Kitty Sucker”, with Carter telling us, “It’s about the sort of complexities of passionate modern love, and how relationships can come from all different angles … It’s about when you find that person, you just want to drown yourself in them.”

Carter also discussed the songs “Anxiety” and “End of Suffering”, while both he and Richardson talked about branching out musically from their hardcore roots and offering more variety in terms of sounds on the new album.

Pick up the album End of Suffering here, and catch Frank Carter & The Rattlesnakes this fall in North America headlining the Monster Energy Outbreak Tour. See the dates below.

Check out our full interview with Frank Carter and Dean Richardson at Koneko Cat Cafe in the video player above. 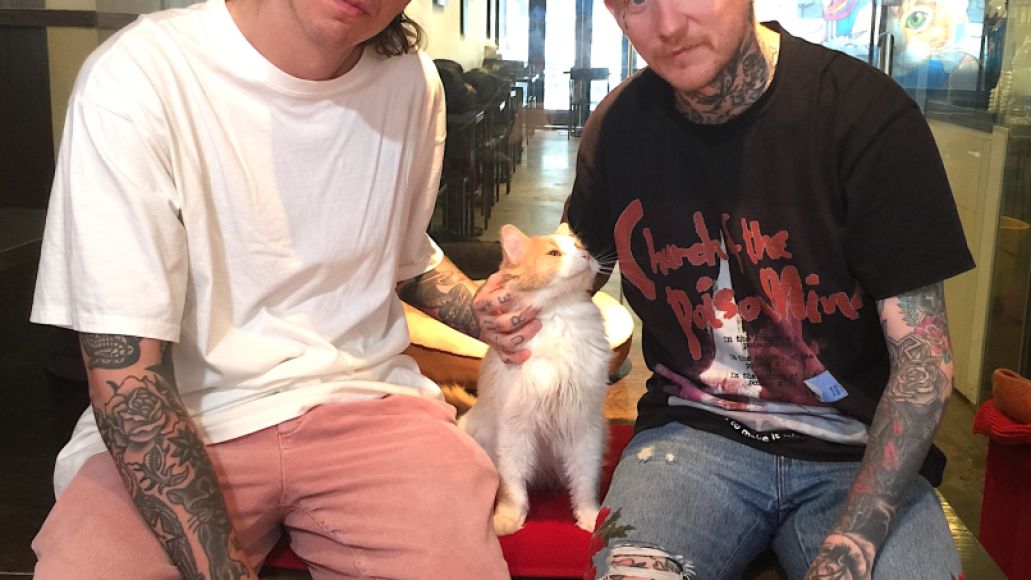